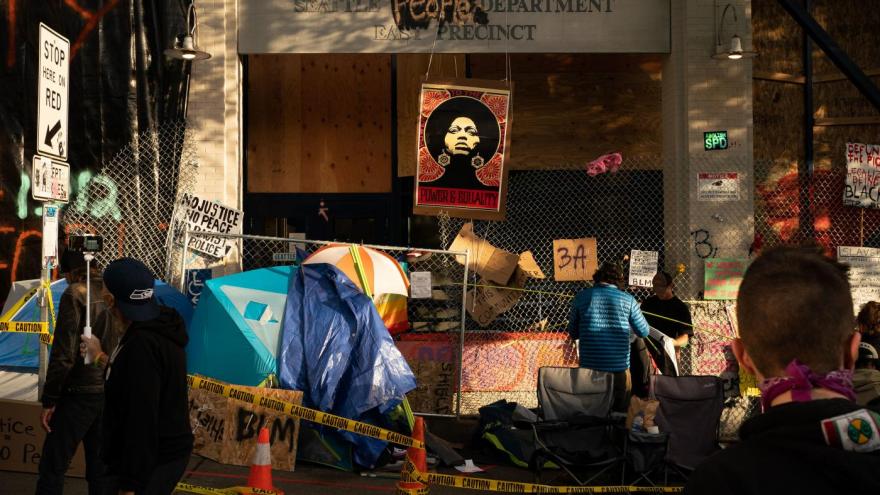 Police are dispersing protesters in Seattle's Capitol Hill Occupation Protest (CHOP) area and have arrested at least 13 people on July 1, 2020 after an emergency order by Mayor Jenny Durkan. In this photo, people set up a tent outside of the Seattle Police Departments East Precinct in the police-free zone known as the Capitol Hill Organized Protest (CHOP) on June 15, 2020 in Seattle, Washington.

Hundreds of police officers worked afterward on cleaning up the area, and the damage there is "absolutely devastating," Seattle Police Chief Carmen Best said.

The chief was "just stunned by the number of, the amount of graffiti, garbage and property destruction," she said at a news conference.

Durkan issued an executive order Tuesday in response to "reported life safety, public health and property issues" in and around the East Precinct and Cal Anderson Park area, which protesters have occupied for the past few weeks and which has been marred by a series of shootings.

"Due to ongoing violence and public safety issues in the East Precinct/Cal Anderson Park area, Mayor Jenny Durkan has issued an executive order to vacate the area. Seattle police will be in the area this morning enforcing the Mayor's order," the Seattle Police Department tweeted.

Police tweeted anyone who remains in the area or returns to it will be subject to arrest.

The 31 arrests were for failure to disperse, obstruction, assault and unlawful weapon possession, according to police.

Best said in a statement the move comes after violence in the zone.

"As I have said, and I will say again, I support peaceful demonstrations. Black Lives Matter, and I too want to help propel this movement toward meaningful change in our community.  But enough is enough," she said.

Thousands of protesters have occupied the four- to six-block area -- known as CHOP or CHAZ -- since early June in an effort to demand police reform following the police killing of George Floyd. But there have been five shootings in the area in the past two weeks, including two fatal ones, undermining its original motivation.

"It is over because of the violence," Seattle community leader Andre Taylor told CNN last week. "I've told people here don't be focused on the location. CHOP is not a location, it is an idea."

Dustin Akers, who lives in an apartment complex in the heart of the CHOP area, took several videos of police clearing the zone around 5 a.m. Wednesday.

Living in the area has been "incredibly unstable and violent around the clock for the past two weeks," Akers told CNN.

"It started out well intentioned and then quickly took a turn for the worse. The occupied area is now empty with tents and supplies thrown everywhere."

He also shared an excerpt that his apartment complex, Packard Building Apartments, owned by Equity Residential, shared with residents on June 30.

"Since the occupation of the streets surrounding our building, tenants have been subjected to violence, threats, vandalism, noise, lewd conduct, public defecation, daily fights and limited access to the building," the complex wrote.

Residents were coming out of the homes and apartments and "thanking the officers profusely for being there to help clean out the area," Best said. "So we don't even know how much trauma people were experiencing because of what was happening in that area."

US Attorney General Bill Barr said the CHOP area had become a "haven for violent crime" and praised the work of the police chief.

"As Chief Best made clear throughout the process, there is a fundamental distinction between discussion of substantive issues -- including addressing distrust of law enforcement by many in the African-American community -- and violent defiance of the law," he said in a statement.

The Seattle Department of Transportation (SDOT) had a crew of 35-40 people removing traffic control, concrete barriers and changing the traffic pattern back to the original version Wednesday, Sam Zimbabwe, the director of the department, said.

The SDOT is also working with CHOP artists to secure artwork and take it offsite. The city is not taking ownership of the artwork, but trying to find a way to preserve, protect and repurpose it, Zimbabwe said.