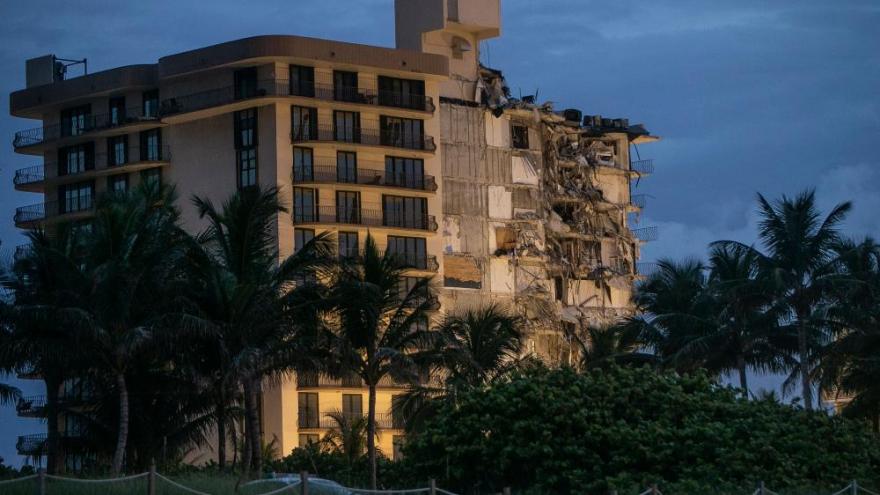 A view of the Champlain Towers South, as the search and rescue teams for survivors continue on Wednesday, June 30 in Surfside, Florida.

(CNN) -- Officials are considering demolishing the rest of the Champlain Towers South as operations continue in sections that crumbled to the ground a week ago, Miami-Dade County Mayor Daniella Levine Cava said Thursday evening.

Work on the debris was halted for much of the day as engineers assessed the structure still standing. Levine Cava told reporters at an evening news conference the operation resumed about 4:45 p.m.

"Given our ongoing safety concerns about the integrity of the building we're continuing to restrict access to the collapse zone," she said.

Engineers are conducting ongoing testing and evaluations of the site to expand the search into more areas as it becomes safe to do so, she said. Miami-Dade Fire Chief Alan Cominsky said crews were working in three of nine grids.

The mayor said officials need to make the dgecision about a "likely" demolition "extremely carefully and methodically," taking into consideration the impact it could have on the existing pile of rubble.

Scott Nacheman, a structure specialist with the Federal Emergency Management Agency, said they will evaluate technical data and stakeholder information and pass along the findings to officials.

He said it could be weeks before demolition occurs.

But State Fire Marshal Jimmy Patronis said the demolition "might be sooner than we're anticipating."

He said they were bringing in heavier equipment that creates potential complications to the weight that keeps the still-standing sections in place.

"The timing of it is still yet to be determined, but in order to complete what it takes, in order to finish the mission, the building will have to go," he said. "It's just too much of a risk."

Earlier in the day officials said there were concerns about the stability of the sections of the building that are still standing.

"Concern assessments included 6 to 12 inches of movement, and a large column hanging from the structure that could fall and cause damage to the support columns in the subterranean garage area," Cominsky said.

Earlier Thursday, President Joe Biden and first lady Jill Biden met with the search and rescue personnel, first responders and some the families of the 145 people still unaccounted for.

"Unfortunately, I've done a lot of these circumstances where I've met with families who've had great loss," the President said after the three-hour meeting. "And what amazed me with this group of people was the resilience, the absolute commitment, their willingness to do whatever it took."

He added: "I walked away impressed by their strength."

The Bidens later visited a memorial wall near the collapse site where the first lady laid a bouquet of flowers.

At least 18 people are confirmed to have been killed, including four members of one family.

Sisters Lucia Guara, 11, and Emma Guara, 4, were located Wednesday as was their mother, Anaely Rodriguez. Their father, Marcus Guara, was one of the first victims found.

One of the girls was a student of Miami-Dade County Public Schools, the school district's superintendent Alberto Carvalho said. In total, 17 of Carvalho's students lived in the building; he has made contact with 15, and one remains unaccounted for, he said.

Now, he says he prays their district won't have to mourn another student. "The weight in my heart is unbearable," Carvalho told CNN.

Hoping to bring answers to the families of the missing, rescue teams have been working endlessly to break through 13 to 16 feet of the concrete that came crashing down as many residents slept.

Almost 1,400 tons of building material has been removed from the site, Gov. Ron DeSantis said Thursday.

Meanwhile, a new obstacle looms as Tropical Storm Elsa has formed in the Atlantic, with Surfside in its extended forecast cone. Division Director for Office of Emergency Management Charles Cirillo said the county faces the risk of heavy rainfall and strong winds from Elsa from Sunday night into Monday morning.

The collapse happened in the early morning hours of June 24, and while some families have told miraculous stories of the mere seconds they had to process what was happening and escape, others spoke of the terror.

Ashley Dean's sister, Cassie Stratton, is among the missing. Stratton called her husband to say the pool was collapsing and the ground was shaking, Dean told CNN.

Stratton began to scream loudly, and then the phone went dead, Dean said.

"It was very hard to know that that was my sister's last words and just the terrifying moments that she endured in those last moments before, you know, before and while it was collapsing," Dean said.

Iliana Monteagudo was woken from her sleep that day around 1 a.m. ET by what she described as "a rare force," she told CNN. She thought she had left the balcony door open, so she ran to close it. But then she saw the ceiling where a crack had begun to form, and from there things started coming down fast, she said.

"Something inside of me said run," she said. "You have to run and save your life."

Adriana Sarmiento and Roberto Castillero were staying at a hotel near the Champlain Towers South and just happened to record a video that shows debris and gushing water in the garage of the building minutes before it collapsed.

The couple watched as people in the building rushed to their balconies, confused about the sound. Sarmiento and Castillero scrambled into the street, trying to wave for residents to evacuate, but they couldn't understand her, she said.

Video they recorded after the collapse showed rubble and debris even as far as where they were standing after running back toward their hotel.

They were in disbelief.

"I said, 'Where are the people on the balcony?'" Castillero said. "I did not realize that the balcony was not there."

Five members of the condo association's seven-member board -- including its president, Anette Goldstein -- decided to resign in the fall of 2019, when the condo association was debating multimillion-dollar repairs, the Washington Post reported, citing board meeting minutes and Goldstein's resignation letter.

The majority of the Champlain Towers board decided to quit following disputes over the lackluster response in tackling the repairs needed in the condominium complex, the paper reported.

"We work for months to go in one direction and at the very last minute objections are raised that should have been discussed and resolved right in the beginning," Goldstein wrote in her September 2019 resignation letter that was obtained by the Post.

The resignations took place about 11 months after the structural field survey report, which detailed "extensive and necessary repairs," according to the firm that performed the survey, Morabito Consultants.

Goldstein's letter appears to indicate growing frustration in trying to resolve the issue and pay for the repairs, which were estimated to be about $9 million in 2018.

Goldstein and some of the others would later return to the board -- one of the members just three weeks after stepping down -- documents indicate, the Post reported.

The paper said its efforts to reach almost everyone who had served on the board since 2018 were unsuccessful. Two of them are reported to be missing, according to the Post.

The estimated cost for repairs had grown to about $15 million by the time the work was approved by the board in 2021, according to an assessment letter obtained by CNN. Those costs would be paid by the residents.