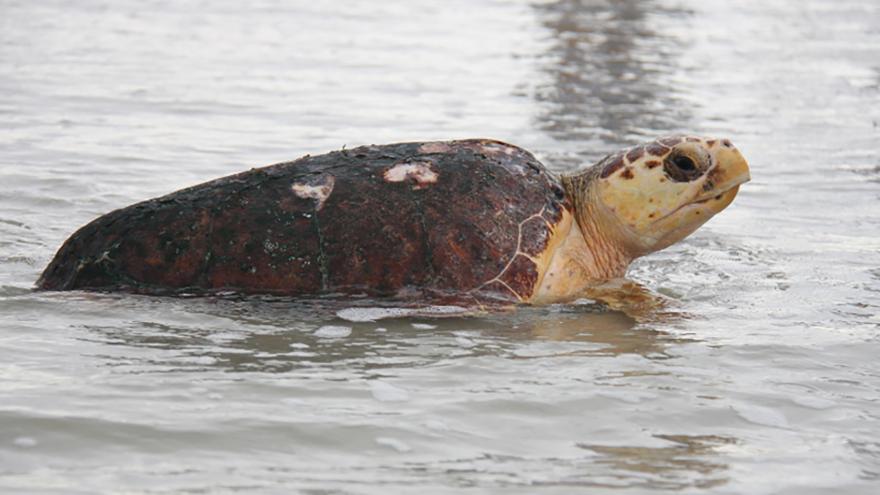 (CNN) -- Sea turtles in Florida are nesting in peace -- for now.

With the beaches in Florida closed in an effort to stop the spread of coronavirus, researchers are seeing less plastic and waste, fewer people and vehicles on the beach and less disorientation for emerging hatchlings that's caused by artificial lights on the beach, David Godfrey, Executive Director for the Sea Turtle Conservancy told CNN.

And because of these factors, the sea turtles are able to build without any disruptions.

No people, no problem

Nesting season for leatherback turtles, the largest of all sea turtles, is underway right now mostly in the central east and southeast coast of Florida, according to Godfrey. They nest in fewer numbers than the loggerheads, who arrive in May. Later in the summer months is when green turtles will arrive.

It takes about 60 days for sea turtle eggs to incubate and for hatchlings to emerge, Godfrey said.

But during that time on an active beach, lots of things can happen to that nest -- it can get trampled, people can dig it up, and artificial light can harm the hatchlings.

With an inactive beach, the situation might be quite different.

"I think there is a strong likelihood that we will see decreased human-caused impacts on sea turtle nesting this year, which is a rare silver lining to this global pandemic," Godfrey said. "It's premature to try and use numbers to demonstrate what we all think and hope is happening. The numbers just aren't there yet. I hear that the season is going pretty well so far, it's off to a good start."

Less foot traffic helps the reptiles right now, but what will happen when the beaches reopen and the sea turtles' eggs begin to hatch? Godfrey said researchers are working in uncharted territory and only time will tell.

An influx of nests

In Juno Beach, 60 miles north of Fort Lauderdale, Dr. Justin Perrault, Director of Research at the Loggerhead Marinelife Center told CNN they have counted 72 nests on their beach so far; 71 were leatherback nests and one was a loggerhead nest.

Godfrey said when the nesting season culminates in late October, researchers will be able to measure how successful it was. Toward the end of April is when they will see hatchlings from the leatherback sea turtles.

Perrault said his team does worry that when the beaches reopen, there may be an influx of people flocking to the beach because they were stuck indoors for an extended period of time.

"It just depends on the behavior of people after the closures end," he said "And if there's an excessive amount on the beaches, then more people means more interaction with turtles, which can be negative if they don't follow the rules."

The city of Jacksonville announced beaches and parks in Duval County will open Friday with certain restrictions starting at 5 pm, according to the city's Twitter page.

In a video statement, Mayor Lenny Curry cited Florida Governor Ron DeSantis' executive order and said the beaches will only be open for essential activities like walking, biking, hiking, fishing, running, swimming, taking care of pets and surfing while social distancing from others.

City parks will be open for normal business hours, but public gathering locations like pavilions and picnic areas will remain closed.

Perrault said when people do return, it'll be important for them to keep lights off when it's possible, maintain distance from marine animals and leave the beach the way they found it.

"Remember that we're not the only species out there," he said.