Scuba divers thought it was just a log in a lake. Turns out they discovered a 1,200-year-old canoe 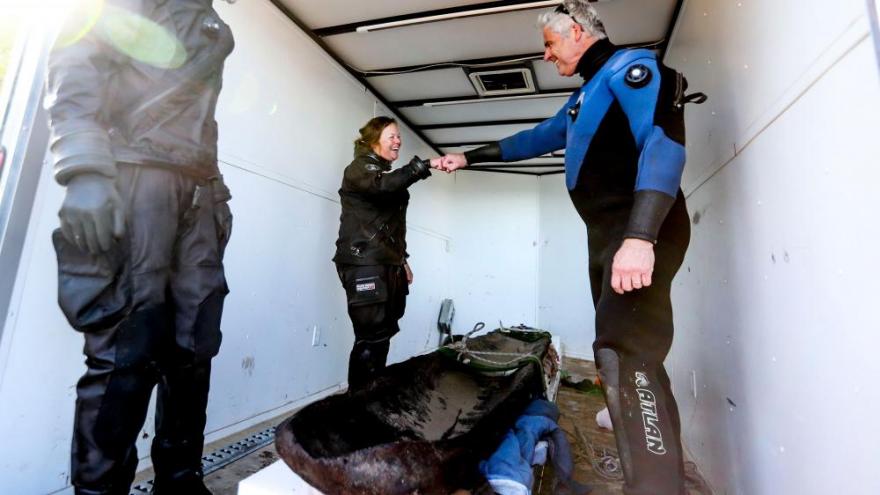 (CNN) -- On a brisk Tuesday at Lake Mendota in Madison, Wisconsin, maritime archaeologists, scuba divers, and residents of the Spring Harbor neighborhood stood in the cold as a canoe was brought to shore. But this was not just any racing or touring canoe -- it dates back more than 1,200 years.

After days of planning the best way to raise the dugout canoe, teams of divers rejoiced as the canoe was laid down on the shore safely. According to Jim Skibo, Wisconsin's state archaeologist, the "remarkable" discovery was "something I've never found in my career."

"Archaeologists are used to digging up things like broken pieces of stone tools, or pottery or metal artifacts, things that are not organic, so to find something that was organic... it's important to find something like that occasionally."

Tamara Thomsen, a maritime archaeologist with the Wisconsin Historical Society and owner of Diversions Scuba, first came across what she thought was a log sticking out of the bottom of the lake while riding an underwater scooter in June alongside co-worker Mallory Dragt. After investigating the find, Thomsen determined the log was actually a dugout canoe.

Carbon-14 dating on the canoe determined it was 1,200 years old, making it one of the oldest intact vessels ever found in Wisconsin, according to Skibo.

"I looked at it and it was in such a wonderful state of preservation that I was very suspicious that it was old because wood typically doesn't survive that long," Skibo told CNN.

According to Skibo, archaeologists occasionally find organic fragments of larger items that have been charred or preserved in a special microenvironment, but he noted all organic material breaks down quickly once underground. The canoe survived, he postulates, because it was kept in a constantly wet environment away from light in relatively deeper water. It was discovered on a slope under about 27 feet of water, according to CNN affiliate Madison.com -- he believes it is the deepest any dugout has been recovered.

Skibo said the canoe had net sinkers, which were simple stones that were notched and put on the end of nets for fishing, which further verified to him the canoe was quite old. Because he believed it could have been the oldest intact water vessel in Wisconsin, he knew it had to be taken out quickly because it was uncovered and would have decomposed rapidly.

Over six weeks, Thomsen, Skibo and a few others from the museum collaborated with the Dane County Sheriff's Office on the recovery and excavation. Last week, the Sheriff's Office Dive Team dredged around the canoe and fully exposed the boat, after which rods of rebar were stuck into the bottom of the lake to keep it in place, as reported by Madison.com. Small boats journeyed to the site, and four 45-pound bags of sand were placed in the canoe to give it weight as it was towed into shored at just 1.1 miles per hour.

The canoe was transferred to a padded aluminum plank, then safely carried to a trailer. The excavation brought onlookers who watched from ashore for over four hours, including Satya Rhodes-Conway, the city's mayor.

Beyond being an uncommon find in the Midwest, the canoe "is a great way to tell multiple stories and to educate people about the people who came here and lived here before, as well as their craftsmanship," Skibo said. Carbon dating revealed that the canoe was likely constructed during the Effigy Mound Period, named after mounds shaped like animals that surrounded Lake Mendota.

"Consider cutting down a tree that's two-and-a-half feet wide with a stone tool, and then hollowing it out and making it float. It must have taken hundreds of hours and a great deal of skill," Skibo said.

"You get a new appreciation for people that lived in a time when there were no modern-day tools to do this thing where they could do it quicker."

Those who built the dugout canoes in present-day Dane County were ancestors of the Ho-Chunk Nation, who primarily live in Wisconsin. They are often referred to as the "People of the Sacred Voice."

For the next two years, the canoe will undergo preservation treatments, the first of which will preserve the canoe's liquid environment in a tank at the State Archive Preservation Facility that will kill algae or microorganisms. After that, water that saturated the wood will be replaced with a treatment of polyethylene glycol, to prevent further degradation, according to Skibo.

It will then be displayed in the Wisconsin Historical Society's proposed expanded museum in downtown Madison.

"I'm an archaeologist who tells stories from artifacts, and this is a great one," Skibo said. "It's about transportation. It's about subsistence and fishing. It's about all kinds of things about the time period, and I'm sure it'll be an important display piece and museum."

Correction: A previous version of this story misstated the description of the Ho-Chunk Nation. The members are known as "People of the Sacred Voice."