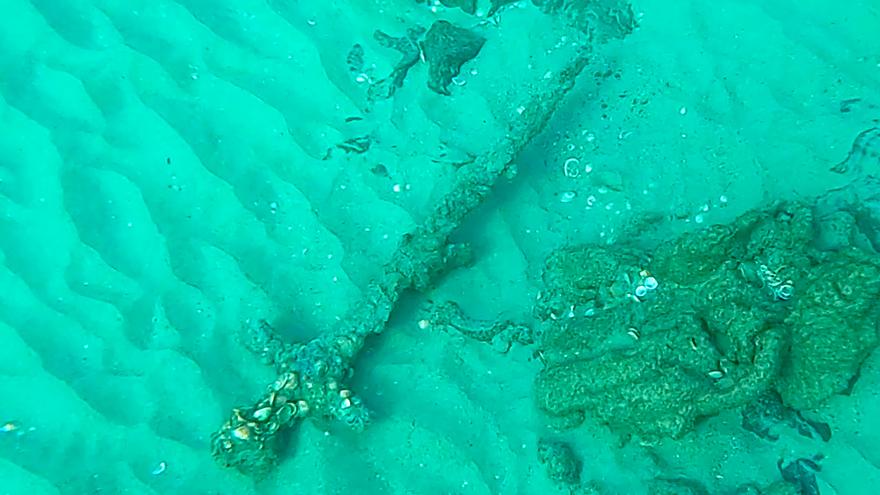 (CNN) -- A scuba diver has found a 900-year-old Crusader sword with a three-foot blade off the coast of Israel.

The amateur diver spotted the sword and other ancient artifacts on the seabed off northern Israel, according to a statement from the Israel Antiquities Authority (IAA) published Monday.

He was diving on October 9 when he spotted the sword, which boasts a foot-long hilt, along with stone anchors, metal anchors and pottery fragments.

The artifacts were "apparently uncovered by waves and undercurrents that had shifted the sand," the IAA said.

The diver took the sword up to the surface so it wouldn't be stolen or covered up again, before handing it in to the IAA.

The sword was found 200 meters (656 feet) from the shore, at a depth of four meters (13 feet), Koby Sharvit, director of the IAA's Marine Archaeology Unit, told CNN on Tuesday.

Its size and shape suggest it belonged to a Crusader, as does the fact that it was found just a few kilometers from Atlit castle, a Crusader fortress, Sharvit added.

Dating from 1096 to the late 13th century, the Crusades were a set of military expeditions by Western European Christians that aimed to retake the Holy Land in the Middle East after centuries of Muslim wars of expansion.

Nir Distelfeld, Inspector for the IAA's Robbery Prevention Unit, said the sword is a rare find that has been preserved in perfect condition.

"It was found encrusted with marine organisms, but is apparently made of iron," Distelfeld said in the statement.

"It is exciting to encounter such a personal object, taking you 900 years back in time to a different era, with knights, armor and swords."

Sharvit told CNN the sword is well preserved because it was buried in a deep layer of sand, without oxygen.

It currently weighs around 5-6 kilograms (11-13 pounds) due to the incrustation of stones and shells, but the sword itself probably weighs 1-2 kilograms (2.2-4.4 pounds), he said.

The coastline in the area has many natural coves that provided shelter for ancient ships, and settlements such as Dor and Atlit developed around the larger coves, according to the IAA.

This means the area was popular with merchant ships -- and that means a wealth of potential archaeological finds.

The site has been monitored since June, when some artifacts were first discovered by members of the public. But the movement of the sands means artifacts are "very elusive," according to the statement.

"Our work actually is like a puzzle," Sharvit told CNN, explaining that even small storms can move the sand around and expose new objects.

Other artifacts recovered from the site show it was used in the Late Bronze Age, some 4,000 years ago, by ships seeking shelter, Sharvit added.

He told CNN that the team will closely monitor the site in the coming months.

"It's very strange to find just one artifact" from the Crusader period, he said, explaining that the sword could have been left following a shipwreck, or a Crusader landing party.

Winter storms could expose more artifacts, he added, and archaeologists will carry out further surveys in the area.

In the meantime, the sword will be sent to the IAA labs to be cleaned, said Sharvit, who hopes to learn more about its history when the metal itself is revealed.

IAA Director-General Eli Escosido said: "Once the sword has been cleaned and researched in the Israel Antiquities Authority's laboratories, we will ensure it is displayed to the public."