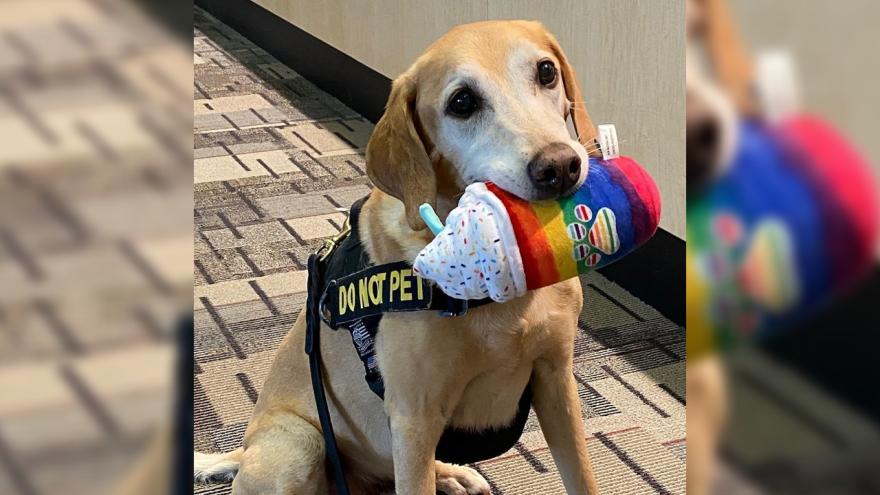 (CNN) -- Dog lovers -- get ready for your hearts to melt over a hard-working dog named Eebbers.

One of Minneapolis-St. Paul International Airport's (MSP) passenger-screening canines, he has won the Transportation Security Administration's 2022 "Cutest Canine Contest," according to a news release.

The announcement comes on National Dog Day, which is on Friday, August 26, this year.

The contest is held "to acknowledge the important role TSA's hardworking canines play in protecting the nation's transportation system," the TSA release said.

Adorable Eebbers was chosen out of a field of 92 contenders. TSA held a nationwide social media contest and encouraged members of the public to vote on their favorite.

"Put your paws together for @mspairport's Eebbers - winner of the @TSA's 2022 Cutest K9 Contest!" MSP said in a tweet on Friday. "Congratulations on your win."

Eebbers, an 11-year-old Vizsla-Labrador mix, is a passenger-screening male canine who "works at MSP alongside his handler as they screen travelers and their belongings for explosives at the security checkpoint," the release said.

Eebbers has worked at MSP for nearly 10 years and is the last remaining canine born into TSA's Puppy Program who is still working for TSA.

Eebbers has assisted with security for two Super Bowls, the Special Olympics World Games, a NCAA National Championship Football game, the Indianapolis 500 and a NASCAR event, according to TSA.

Currently, the agency has more than 1,000 canine teams that are deployed nationally. The release reminds travelers that while TSA canines are "cute," they are working dogs and should only be touched and fed by their handlers.

And that's some laudable restraint with a pooch as precious as Eebbers.