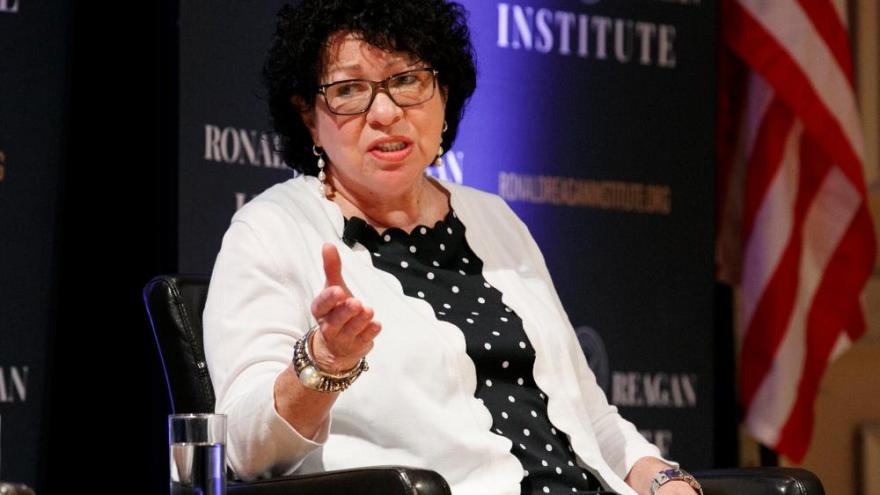 In this September 25, 2019, file photo Supreme Court Justice Sonia Sotomayor speaks during a panel discussion at the Library of Congress in Washington.

(CNN) -- Justice Sonia Sotomayor told an audience Wednesday that recent changes in the format of oral arguments were instituted in part after studies emerged showing that female justices on the court were interrupted more by male justices and advocates.

Sotomayor said the studies, including one by researchers Tonja Jacoby and Dylan Schweers in 2017, have had an "enormous impact" and led to Chief Justice John Roberts being "much more sensitive" to ensuring that people were not interrupted or at least that he would play referee if needed.

She also said that it is a dynamic that exists not only on the court but in society as well.

"Most of the time women say things and they are not heard in the same way as men who might say the identical thing," she said.

Sotomayor said that she had noticed the pattern "without question" before the system was changed on the bench and sometimes she would respond in a way that she knew was probably not ideal. "I interrupt back," she said.

The comments came during a talk before New York University School of Law for a conference dedicated to diversity and inclusion. Sotomayor touched on the changing demographics of the country, the need for more professional diversity on the court, and what it has felt like to be the court's first Latina.

The court's new system at oral arguments has been most evident this term now that the justices are back in open court. So far, even in contentious cases, the justices haven't cut each other off -- something that often occurred in past terms. The traditional format has been changed to allow each justice -- once an attorney's time has expired -- to ask specific questions in order of seniority.

The new system has seemed to please Justice Clarence Thomas in particular. For years he rarely asked questions from the bench, and this term he has become an active participant and opened each set of arguments with a question.

Sotomayor was also asked about diversity in a different context. New York University School of Law professor Kenji Yoshino noted that several of the court's conservative members adhere to originalism -- the judicial theory that the Constitution should be interpreted as it was understood at the time of the founding. He inquired whether that approach will become "increasingly untenable" as the country's demographic makeup continues to depart substantially from the make up of the framers.

Sotomayor agreed that a number of her colleagues adhere to the philosophy and she said, "whether and how that will lead to dissonance between what we are deciding and what the general population accepts as what the law should be -- is a fascinating question."

The Supreme Court is facing a blockbuster term considering whether to overturn Roe v. Wade, the landmark 1973 Supreme Court decision legalizing abortion nationwide, and expand the scope of the Second Amendment.

She said that there is "going to be an awful lot of dialogue by the greater society about the role of the courts in our society" and noted that there already had been some discussions among critics of the conservative majority concerning whether the court's composition should change.

Sotomayor also echoed President Joe Biden's criticisms about the current court's lack of professional diversity. She noted that when Ruth Bader Ginsburg passed, "we lost our only civil rights lawyer" and that currently there is no other justice who has "been in the trenches" on civil rights, or immigration, or environmental law.

"I do worry that the authorities who are selecting judges are not paying enough attention to that kind of diversity as well," Sotomayor said. She said that she works to hire law clerks with diverse backgrounds and selects her audiences carefully to spread her message.

She was also asked if she felt additional pressure because she was the first Latina on the court.

"If you are a person of color, you have to work harder than everybody else to succeed," Sotomayor said. "It's the nature of -- the competitive nature of our society -- where you have to prove yourself every day."

"And I don't know many people of color who don't come into this enterprise without feeling that pressure of knowing that they have to work harder," she said.