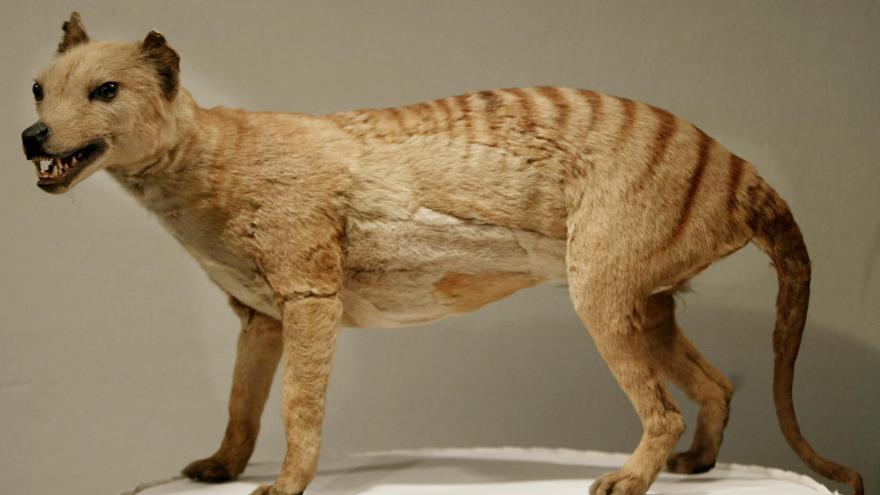 (CNN) -- Where would we be without dreams?

It's a question raised in the new Netflix fantasy drama "The Sandman," based on a thought-provoking comic book series by Neil Gaiman that envisions human traits and experiences as anthropomorphic forms who exist within an unconventional family.

But the discussion of dreams is also something the CNN team encounters each week as we interview scientists and uncover the latest findings.

Dreams, so often, are at the root of what can make such scientific discoveries and advances possible.

These visionary thoughts pave the way for passion projects to become fact-finding explorations that create new knowledge. Dreams inspire us to ask questions and push the boundaries of possibility.

After all, as Gaiman wrote, "Dreams shape the world."

Back to the future

It may be time for the Tasmanian tiger to walk the Earth once again.

A new complex project will combine gene editing, ancient DNA retrieval, artificial wombs and other technological advances to bring the striped carnivorous marsupial, which has been extinct for nearly 100 years, back to life.

Thylacines, as the creatures are officially known, disappeared from virtually everywhere except the Australian island of Tasmania about 2,000 years ago. There, humans who saw these coyote-size animalsas livestock predators drove the species to extinction.

But the path to resurrecting an extinct animal like the Tasmanian tiger is not cut-and-dried.

Fish don't tend to thrive in subzero waters, but scientists have discovered one species in the icy seas off Greenland that may be the ultimate survivor.

The variegated snailfish is tiny, but it has an unprecedented number of antifreeze proteins in its body. These naturally occurring proteins prevent large ice grains from forming in the cells and body fluids of the Arctic fish.

What's more, the snailfish is the only known polar fish to have biofluorescence, a phenomenon that allows it to glow in green and red.

But time may be running out for this impressive little creature, which has adapted to live in an environment that is rapidly warming.

The Artemis I launch is days away -- and now, we have a passenger list.

The goal of the Artemis program's inaugural mission isn't to carry humans through deep space.

Instead, three mannequins, Snoopy and Shaun the Sheep will board the Orion spacecraft stacked atop the mega rocket that rolled out to the launchpad this week ahead of a scheduled liftoff on August 29.

This motley crew will enjoy the view as they fly around the moon. The flight will also carry more than 100 pounds (45 kilograms) of mementos from Earth.

Want to feel a little more connected to exciting space events? You could help name exoplanets that the James Webb Space Telescope will observe or chat with astronauts on the International Space Station via an amateur radio station, like this lucky 8-year-old did.

Wonder Theory readers likely know of the main culprit that caused dinosaurs to die out -- a city-size asteroid that struck off the coast of Mexico 66 million years ago, leading to the mass extinction of most of the life on Earth.

Now, researchers have uncovered another large impact crater 248 miles (400 kilometers) off West Africa -- and it formed around the same time.

The underwater crater is 5 miles (8 kilometers) across and shows the hallmarks of an impact by an asteroid more than 1,300 feet (about 400 meters) wide when it slammed into our planet.

The newly discoveredNadir crater could change how we understand the downfall of the dinosaurs.

The ancient monkey puzzle trees of Patagonia have scaly branches and spiny leaves that evolved as a defense against long-necked dinosaurs that once munched on them.

Now, scientists consider these evergreen survivors from the Jurassic era endangered. Fires, overgrazing and logging have diminished the forest where the towering trees grow.

The tree's large pine nuts are a favorite food of austral parakeets as well as the Indigenous Mapuche people of Chile and Argentina -- and both could help the evergreens survive.

Seeds discarded by the parakeets and the replanting of seeds by the Mapuche are providing a brighter future for the Araucaria trees.

-- Encased within a thick ice shell, Jupiter's moon Europa has a global ocean where underwater snow may float upward, new research has found.

-- Read if you dare: A new project has revealed manuscripts up to 1,000 years old that showcase some of the bizarre medical remedies recommended during the medieval era.