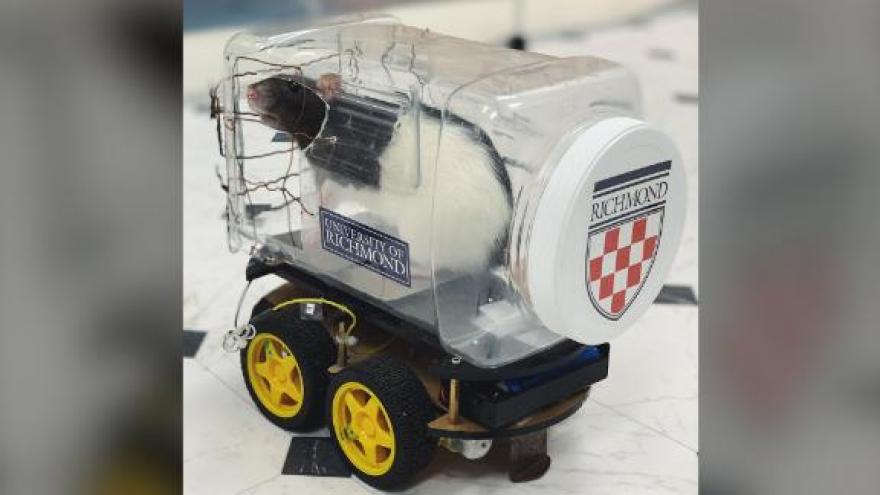 The rats inspect the ROV before getting behind the wheel--or copper bar, in this case. Responsible driving 101! CREDIT Kelly Lambert/University Of Richmond

(CNN) -- Rats have learned how to drive and steer their own tiny cars in exchange for Froot Loops.

That's a feat on its own.

But the real discovery in the study -- and its wider implications for human mental health treatment -- was found in their poop, per new findings published in Behavioural Brain Research.

Rats are better drivers when they're mentally stimulated

Kelly Lambert, study author and head of the University of Richmond's Lambert Behavioral Neuroscience Laboratory, trained two groups of young rats: One bunch raised in an "enriched environment" with toys, ladders, balls and pieces of wood designed to spark mental stimulation, and another reared in a standard, unexciting lab cage.

The rats learned to enter a custom "rat-operated vehicle," or ROV, adorably constructed from a one-gallon plastic container turned on its side.

Once inside, the rat racers would stand on an aluminum plate and press on a copper bar that would trigger the wheels' motor. They'd hold down on the bar until they propelled their tiny car to the end of their enclosure, where they collected their reward: Froot Loops.

When it came time to drive, the rats who played with ladders, balls and toys were more adept at operating and steering the ROV, thanks to the neuroplasticity (their brains' ability to change over time) triggered by their environment. Their unstimulated cage counterparts effectively "failed their driving test," Lambert said.

In sifting through their fecal matter, Lambert found both groups of rats trained to drive secreted higher levels of corticosterone and DHEA, hormones that control stress responses.

Corticosterone is a hormone animals could secrete in high-stakes scenarios like running from a wild animal or defending themselves from predators, but it can also be expressed in lower-risk tasks like doing taxes or worrying about a loved one (though rats likely aren't advanced enough to form a government, let alone impose taxes on fellow rats).

DHEA acts as a sort of "buffer," Lambert said, when corticosterone becomes toxic -- that is, when it can't be turned off in a reasonable amount of time, creating prolonged stress.

It's evidence that mastering a complex task, like driving a car, bolstered the rats' emotional resilience.

"It is likely that driving gives the rats a sense of control over their environment," she said. "In humans, we would say that it enhances a sense of agency or self-efficacy."

What have rats got to do with human health?

The brains of humans and rats share nearly all of the same areas and neurochemicals -- they're just smaller in rodents. And though humans are certainly more complex than rats, Lambert said there are "universal truths" in how both species' brains interact within their environment to maintain optimal mental health.

So these results have implications for human health, too (and no, they don't mean rats will drive alongside people in tiny lanes on highways). Emotional resilience is one of the first lines of defense against mental illnesses like depression, she said, and learning what behaviors build that up could clue physicians in on how to treat those illnesses in humans.

It's a concept Lambert refers to as "behaviorceuticals," activities that release hormones that can ward off prolonged stress brought on by corticosterone.

"Anything that reduces stress can build resilience against the onset of mental illness," she said.

The activity can be something as simple as knitting, or in rats' case, learning to drive a car. Just engaging hands, paws and brains of varying sizes can enhance a participant's sense of control.