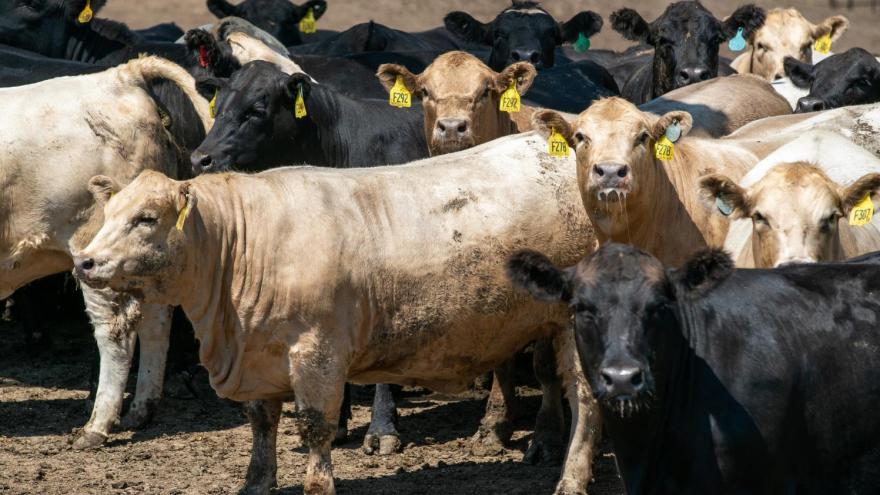 Raising cattle is one of the key reasons why the world's food system contributes up to 37% of global greenhouse gas emissions, the new report said.

(CNN) -- It is a brutal time to be an American farmer.

Hammered by trade wars, a climate crisis and the worst income-to-debt ratio in a generation, calls to Farm Aid crisis lines have doubled in some states, and the website for Iowa corn growers now includes a page on suicide prevention.

On top of this menu of misery comes the latest alarming report from the Intergovernmental Panel on Climate Change, or IPCC, which finds that growing food around the world will only get harder as weather gets harsher and more unpredictable.

But unlike those in the fossil fuel sector, farmers wouldn't have to switch careers to help save life as we know it.

Since every plant, from redwoods to soybeans, moves heat-trapping carbon dioxide out of the air and into the ground, the right amount of innovation, conservation and financial motivation could help modern farmers keep the CO2 there while still making a living and feeding the world.

"We need to think about farming more than just producing food, fuel and fiber, but rather carbon management," says Gene Takle, emeritus professor at Iowa State's Department of Agronomy.

In the so-called "IPCC Lands Report," more than 100 of the world's top climate scientists find that almost three-quarters of the Earth's ice-free surface has been paved, plowed or deforested.

While this has supercharged global economies and lifted millions out of poverty and starvation in just a few generations, humanity is at risk of losing all those gains and more as temperatures rise at a speed unprecedented in human history.

Justin Jordan strolls through his field of stunted cornstalks in Lacona, Iowa. "I'm looking at probably a 20-to-30% drop in yield just from the poor spring we had," he says. Normally, he plants his corn in mid-April, but freakish weather kept him waiting until mid-May, and just as the last seed was planted, it began raining. For two weeks.

Still, he was spared the levee-bursting flooding that put hundreds of farms underwater, so he counts himself among the lucky.

"I'll be able to plant next year," Jordan says. "Some of those guys, those fields are so damaged that they're talking two, three years before they're back in the fields planting again."

Takle shakes his head as I relay the story. "I contend there's no stronger urge to a farmer than to get that first seed in the ground in the spring," he says. "And the fact that they won't be able to ... what is there to live for?"

As a co-author of the National Climate Assessment released on Black Friday, the veteran scientist points to projections that the number of days above 90 degrees Fahrenheit in Des Moines could jump from 17 to 70 by mid-century. But as the window closes on mankind's ability to slow the damage with a sustainability revolution, he points out that farmers could be key allies in the climate crisis fight.

"Take biochar, for example," he says, pointing to a jar of black dust that is charcoal made from organic material. "You put that on the soil, it's almost pure carbon, but it doesn't go back into the atmosphere. It'll stay in the soil for thousands of years."

With all the diesel fuel, synthetic fertilizer and clear-cutting that goes into growing the modern meal, the IPCC Lands Report finds that almost a quarter of greenhouse gas pollution comes from agriculture, deforestation and land use.

But there seems to be a quiet agriculture revolution going on, even among conservative farmers who bristle at the words "man-made global warming."

"Well, there's 7 billion people in the world, about, and we're bound to have some impact," says Ray Gaesser, a Republican who ran for Iowa secretary of agriculture in 2018 while farming more than 4,000 acres of row crops with his son.

Even though he refuses to pin all the blame for 2019's 4-inch-an-hour rainstorms on human habits, he embraces wind energy, Earth-friendly cover crops and soil conservation.

"As we farm a little bit differently, as we sequester nutrients and carbon, we're doing the right thing," he says. "That's what it's about, is trying to do the right thing. We all want to do that, and it shouldn't be political."

He's also agreed to support Interfaith Power & Light, a national group that uses religion to address the climate crisis. The Iowa chapter is led by Matt Russell, appointed to a Department of Agriculture committee in the Obama administration, who operates Coyote Run Farm with his husband and two adopted sons.

By gathering fellow farmers in church basements and appealing to their faith, he has cobbled together a bipartisan coalition held together by love of God and creation.

"I'm not even worried about the hard-core skeptics," he says. "I'm engaged with those who aren't skeptics but have never been invited into the conversation. That's the tipping point."

If he could wave a magic wand, he says he'd have every 2020 candidate working on a plan to change the way farmers are incentivized. If big polluters will have to pay for every ton of carbon burned into the atmosphere, he thinks farmers should get paid for every ton they put in the ground.

Just down the road, Jordan says that whatever reform emerges, he is all in. He's taken advantage of a government plan that pays him to devote some of his land to wild prairie, a biodiversity boost that costs a bit in the short term but increases his yield in seasons to come.

"I at least tried," he says. "Rather than just throw my hands in the air and say I gave up. I only have 410 acres, but I'm willing to do the best I can with what I got."

In the meantime, all he can do is wait, worry and pray for a late frost and a better future.