Scientists say a once-a-month birth control pill works on pigs; they want to test it on people next 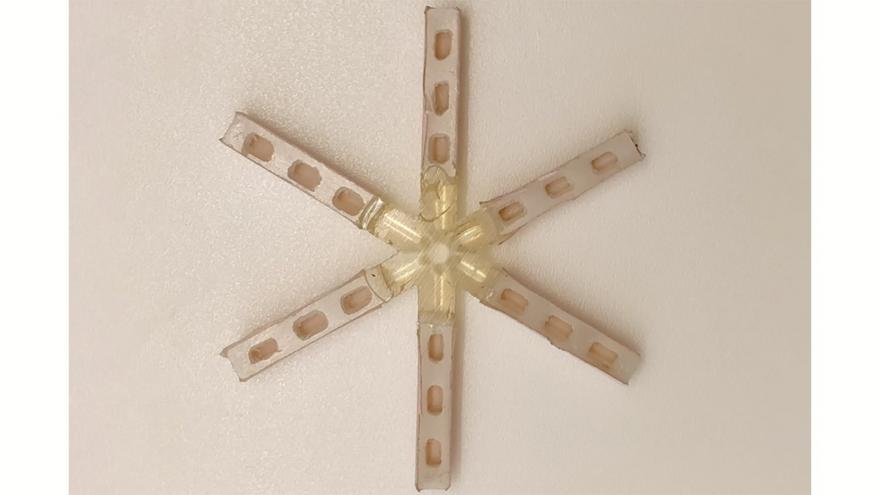 (CNN) -- Scientists say they have made a breakthrough on developing a contraceptive pill that only needs to be taken once a month.

The star-shaped capsule could help reduce unintended pregnancies that arise from users forgetting to take their daily dose of the pill, according to a news release from the Massachusetts Institute of Technology (MIT).

The capsule is coated with gelatin that can remain in the stomach for weeks after being swallowed, the researchers said. From there, it slowly releases hormones to prevent pregnancy.

Tests conducted on pigs showed that the capsule could provide the same effect as taking daily doses. "We are hopeful that this work -- the first example ever of a month-long pill or capsule to our knowledge -- will someday lead to potentially new modalities and options for women's health," said Robert Langer, a MIT professor and co-author of the study.

The research was mostly funded by the Bill and Melinda Gates Foundation, which urged the team to develop new long-lasting contraceptive drugs to reduce the risk of unintended pregnancies.

To make it work, researchers looked for materials that could survive a highly acidic fluid, and discovered that two types of polyurethane could work well for the arms and the central core of the star-shaped capsule. Once the capsule reaches the stomach, it expands and becomes lodged in place. The contraceptive drug, which is loaded in the pill, is then released at a controlled rate over time.

The capsule is designed to break down after three or four weeks, and will exit the body through the digestive tract.

Langer said further research is being conducted to develop the pill for human tests, which he hoped would be possible within three to five years.

The oral contraceptive is one of the most popular contraception methods used around the world. In the United States, it is the second most common contraceptive method for women aged between 15 and 49, according to a survey conducted by the Centers for Disease Control and Prevention (CDC).

It is also highly effective -- when used properly, fewer than one in every hundred women will become pregnant in a year,according to nonprofit group Planned Parenthood. However, the effectiveness rate is closer to 91%, as close to one-third of users have reported missing their dose during a menstrual cycle, the CDC says.

This is not the first instance of scientists testing this kind of drug delivery system to deliver medication. Previously, the same team of researchers also tested loading gelatin capsules with malaria and HIV drugs.

Kimberly Scarsi, a professor of pharmacy practice at the University of Nebraska, who is unaffiliated with the research, said she believed the new pill could help reduce the lack of access to contraceptives, which has given rise to unnecessary maternal and newborn deaths.

"A once-monthly oral contraceptive would provide a discreet, noninvasive birth control option that could significantly improve medication adherence to give women more control over their health and family planning decisions," she said.