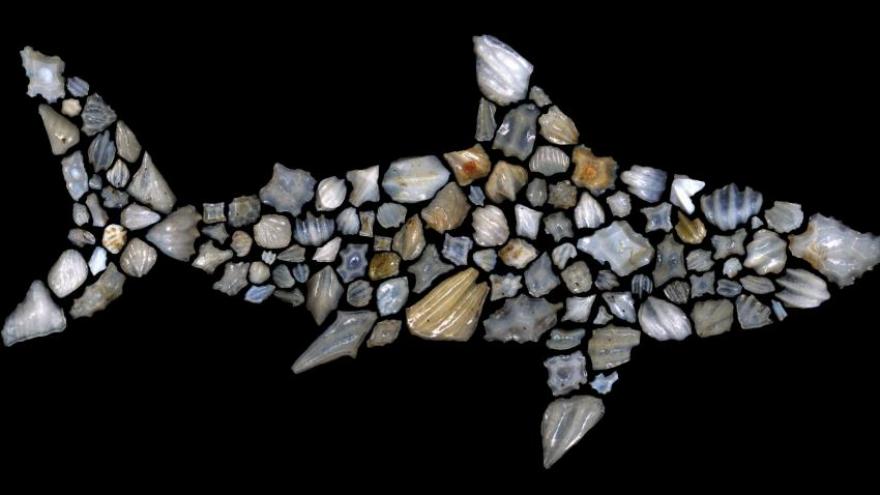 The silhouette of a shark composed of fossil shark dermal denticles described in the study.

(CNN) -- About 19 million years ago, roughly 90% of the world's open-ocean sharks died off, and scientists don't know why.

The recent discovery left researchers stunned, unable to explain the immense loss or the reason behind the deaths of one of the ocean's most powerful predators.

It began when scientist Elizabeth Sibert and her team were trying to learn more about the fish and shark abundance over the last 80 million years, according to a study released on June 3.

"We stumbled into this thing completely by accident because what we saw was everything was pretty stable until about 20 million years when sharks dropped off in abundance by over 90%," Sibert, an oceanographer and paleontologist at Yale University, told CNN. "We found that sharks were doing incredibly well in the open ocean until this one moment in time when they virtually disappeared. We had no idea because no one had ever looked."

At the time, there were 10 times more sharks swimming throughout the world's oceans than we see today. The loss was also double the number of sharks that went extinct during the Cretaceous-Paleogene mass extinction 66 million years ago "that wiped out three-quarters of the plant and animal species on Earth," according to the study's news release.

"We really, truly don't know anything," Sibert said. "This particular interval in Earth's history isn't all that well preserved in the deep sea sediments we look at. It's hard to find suitable locations to do additional studies."

Sibert and her team have few theories.

Since sharks are intimately tied to the environment they live in, it is likely there was an intense environmental change that wiped out millions of the species. It is unlikely the loss can be attributed to another predator unless it is one that has no existing fossil record.

"It's possible something big happened, but whatever it was it was very rapid," Sibert said. "The Earth's system was able to correct it, but these big predators, these sharks that were living in the open ocean, must have been very susceptible to this rapid environmental change. But this is still just a hypothesis."

The researchers do not know how much time it took to eradicate the sharks. It could have taken place in a single day, or maybe 50 years, or even 100,000 years, according to Sibert.

Since the sharks lived so deep in the ocean and far from land, and as the deep sea doesn't preserve bodies in a way that can be lifted and exposed on land, the samples scientists found uncovered organisms they have never seen before.

While the fossils found confirmed it was sharks, the researchers have no way of knowing what the sharks looked like.

"Like most research endeavors, this first paper offers more questions than it can answer, and we plan on investigating the breadth of data denticles (v-shaped scales) offer through a varied set of lenses, from hydrodynamics to ecology," said Leah Rubin, co-author of the study.

"The current state of declining shark populations is certainly cause for concern," she said, "and this paper helps put these declines in the context of shark populations through the last 40 million years. This context is a vital first step in understanding what repercussions may follow dramatic declines in these top marine predators in modern times."

The discovery has left researchers with many unanswered questions: Did this phenomonen impact other sharks in other parts of the ocean at the same moment? Did it impact other creatures living in the ocean or on land?

Most importantly, what exactly happened?

"We hope our study will spark interest in the rest of the scientific community to dig into this time interval," Sibert said. "Something really big must have happened because it impacted this really incredible group of organisms that have been around and frankly surviving major global change for the past 400 millions years."