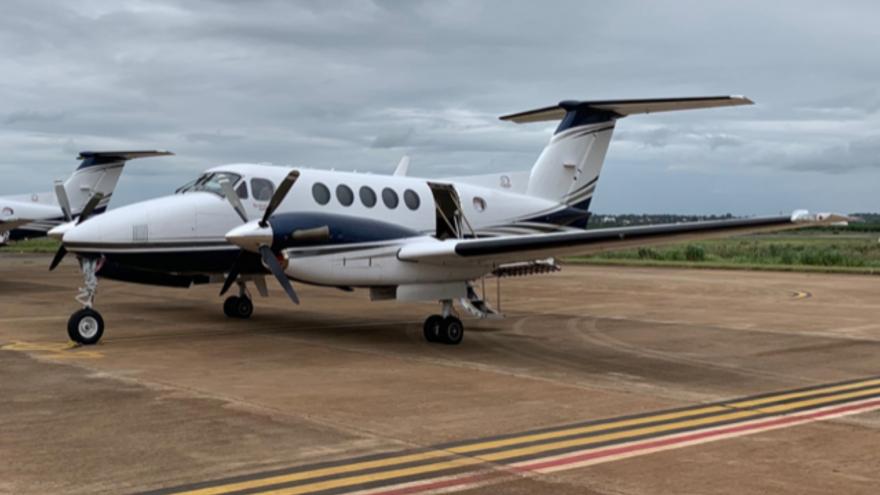 Well, certain parts of the country are doing just that, sort of. It's called cloud seeding, and it's nothing new.

It's been around since the 1940s and countries all over the world have been doing it for various reasons (most notably China), but it's a growing practice in the US, especially in the drought-stricken West.

It's also surrounded with controversy.

We spoke with Julie Gondzar who is the program manager for Wyoming's Weather Modification Program, who admits she gets lots of calls about what they are doing.

Gondzar said some people say "you're playing God," others say "you are stealing moisture from the storm," making other areas drier than they normally would be, kind of like robbing Peter to pay Paul.

There are also environmental factors to consider, as well as the cost-effectiveness versus the reward, which in the West these days water is liquid gold.

"Think about it like water storage, but in the winter on mountaintops," is how Gondzar described what cloud seeding is trying to achieve in her state, "in a nutshell."

Wyoming started cloud seeding in 2003 as part of a study. Then eight seasons ago, they started doing it in an official capacity after their 10-year study proved it works.

This season, they have gone on 28 flight missions for cloud seeding in Wyoming.

She pointed out there are four weeks left in the season, so she is hoping for more opportunities before it winds down.

When you compare Wyoming to other states such as Utah and North Dakota, who have been cloud seeding since the '70s and '80s, the state is fairly new to the game.

Clouds, in basic terms, are a collection of water droplets and/or ice crystals floating in the sky.

It's done in two ways: One way is from the ground and the other is from the air, using silver iodide as the seeding agent.

"The ground-based generators kind of look like small weather stations, are like 20 feet tall, and they aerosolize into the atmosphere," Gondzar explained. "But you have to wait for the right atmospheric conditions so that the plume goes over the mountain range." It makes seeding a little more tricky, because if the wind is blowing in the wrong direction, you'll completely miss your target.

Once the pilot flies into the storm, they ignite the cardboard casings full of silver iodide and "seed" the clouds. The result is more moisture in the cloud, resulting in more precipitation.

The silver iodide "is a natural salt compound," Gondzar emphasized. "The reason it's used is because the geometric shape down to a molecular level is very similar to that of an ice crystal. And if you don't have that, you're not going to create additional ice crystals, which will then accumulate into snowflakes."

But if you think you can bust the drought by using planes to modify the weather, Gondzar said think again.

"Cloud seeding does not fix the drought," Gondzar said. "You can't break a drought with cloud seeding. It's a tool in the toolbox."

Gondzar admitted while they know the method makes more snow than they would otherwise receive, it's difficult to know exactly how much more they are getting.

"There's evidence of it in radar and all kinds of papers written," Gondzar noted. "The question that they're trying to answer now is how well does it work? And that's a difficult question to answer. Because there's an abstract piece of this. There's really no way to know how much snow a particular system would have produced."

She knows cloud seeding doesn't generate a lot of additional snowfall, but every little bit helps these days.

According to Wyoming's Water Systems Data Map, some areas in the state are only at 60% of average for snowpack this season, and the window for additional snow is slowly closing as the season winds down.

Since most of the West gets the majority of its water from snowmelt, she hopes what they are doing helps a tiny bit in the long term.

"It's a small incremental change over a long period of time. That's why consistency is important," Gondzar urged.

She added at $28-$34 per acre foot, cloud seeding is relatively cheap.

"Those numbers tell us that this is an inexpensive way to help add water to the system. Essentially, we are creating a little bit of additional snowpack, that becomes additional streamflow in the spring and summer."

But you need a cloud, to cloud seed. You can't just go out to the Mojave Desert and make it rain.

"This is not something that we can do out of thin air," Gondzar cautioned. "The criteria is very specific for this to actually work."

It can only be done within already existing clouds that were going to produce snow anyway and there has to be a certain temperature range.

"The silver iodide in the cloud is initiating that snow," Gondzar said. "But you can't just make snow out of nothing. You have to have the supercooled liquid water in the cloud."

She explained part of what made this year difficult was the much drier weather during the last month. There were fewer opportunities to cloud seed.

"A lot of people think it's manipulating the weather pattern," Gondzar remarked. "We are essentially just playing with cloud dynamics and cloud physics, on a super, super-small scale."

She is a meteorologist as well and points out the moisture from the weather systems come from much bigger areas like the Gulf of Mexico or the Pacific.

"There's always a huge stream of moisture that our systems are tapping into, and cloud seeding probably brings an additional one to 2% down to the surface."

While Gondzar is confident cloud seeding doesn't steal snow from another area, some scientists disagree.

Daniel Swain is a climate scientist at UCLA and spoke with my colleague and climate writer Rachel Ramirez.

He told her "It is possible that you're actually stealing water from someone else when you do this, because it may be, at least on a regional basis, a zero-sum game where if water falls out of the cloud in one spot, it's even drier by the time it makes it downwind to the next watershed."

He went on to ask, "To what extent are you just shifting around the spatial distribution of precipitation during a scarcity period rather than actually causing it to rain or snow more overall?"

He believes water equity issues need to be researched more.

Another note of controversy has been the safety of the chemicals used in cloud seeding. Gondzar stressed it is not made of harmful chemicals like some people claim.

She pointed out they did lots of testing for before they started officially cloud seeding and could not find any traces of harmful amounts of silver.

She said the amount of silver iodide used is only a few grams at a time. What she's hoping is a small price to pay for bigger rewards down the road.

There have been climate concerns surrounding cloud seeding. Here's more from Ramirez, who reached out to a few scientists, to get their take on cloud seeding's climate angle.

Climate scientists remain skeptical this is the silver bullet

Although cloud seeding has been around for decades and is currently being operated in roughly 50 countries, many climate scientists remain skeptical of the technology's efficacy as well as the time and effort put into trying to manipulate weather.

Swain pointed out it has been historically difficult to design scientific experiments to test the effectiveness of cloud seeding, leaving behind a trail of unclear, intangible evidence on what the benefits are.

"How do you know how much precipitation that might actually end up falling from that cloud occurred due to the seeding? Or how much would have fallen without the seeding?" Swain told CNN. "This isn't a setting where you can do a truly controlled experiment."

Cloud seeding experiments typically deal with a narrow set of parameters, according to Swain, taking into account weather conditions including cloud cover, time of the day, and location. Additionally, the rapidly changing climate adds another layer to the list of variables. As the planet warms, weather patterns and clouds will constantly evolve, often in unexpected ways.

That's what Sarah Tessendorf, a scientist at the National Center for Atmospheric Research, and other researchers from universities and an Idaho power company, set out to examine in 2017. Their results, published in 2020 in the Proceedings of the National Academies of Sciences, managed to quantify how effective cloud seeding is. Yet uncertainties still linger.

During the cold winter months in 2017, the researchers flew aircraft to inject silver iodine, the seeding chemical used, into clouds over the Payette Basin in Idaho, while simultaneously using radars and models to measure its impact on snowfall.

In three cloud-seeding events, the scientists identified "unambiguous seeding patterns," in cold cloud decks not producing ice at all; but once seeded, ice crystals formed inside mirroring the same pattern the aircraft had flown. They were then able to track the formed ice and snow to the ground and measure how much additional snow fell from the seeded clouds.

Despite the results, Tessendorf said more experiments need to be done to improve the technology for it to become a sweeping solution to the climate crisis. The amount of precipitation produced by cloud seeding — up to 10% — isn't enough at all to quench the drought-stricken West.

"It could help over the years augment the storage levels in reservoirs, so that when you get into that extract, you might just go into that drought with a little bit more than you would have otherwise," she said. "That to me is the way that cloud seeding should be viewed. It's not going to be the silver bullet, but it could be a helpful tool in a water manager's toolbox."

When it comes to tackling climate change as a whole, many also question the methods such as the deployment of fossil fuel-powered aircraft to inject silver iodide into clouds, arguing it is counterintuitive to the overall climate goals of slashing fossil fuel emissions. But Tessendorf argued it is a small price to pay in order to improve the technology.

"I will say that the number of aircraft and the duration of these flights to do cloud seeding and the programs that are currently having it done pales in comparison to the number of commercial flights and aircraft we have in the skies all over the world right now," she contended. "So it's to me a drop in the bucket of extra fossil fuels being burned."

"But that does not mean that there isn't room for improvement there in order to have more of a clean process," Tessendorf added.

With the climate crisis accelerating, climate scientists like Swain say resources are much better invested in climate solutions already guaranteed to make significant and equitable impacts.

"There needs to be controlled studies that actually shows it was the seeding that increased the precipitation in a meaningful way," Swain asserted. "The best case scenario is it's a small incremental adjunct to other water-saving or conservation measures during scarce periods, but even that's not clear if it would really work in that capacity in any systematic way."