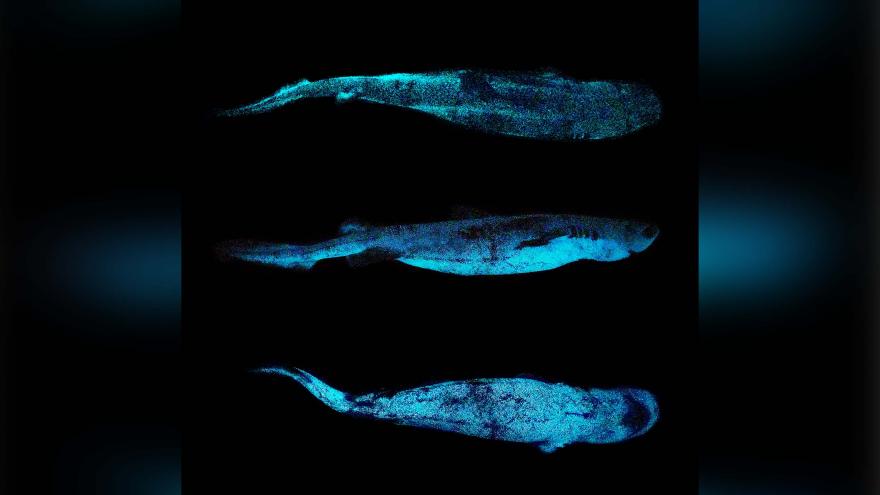 (CNN) -- Scientists have taken the first ever photos of a glow-in-the-dark shark producing its own light.

It was found in an area of ocean known as Chatham Rise, off the east coast of New Zealand's South Island, according to a study published Tuesday by researchers from the Catholic University of Louvain, Belgium and the National Institute of Water and Atmospheric Research (NIWA) in New Zealand.

Bioluminescence refers to the production of visible light by living organisms through a biochemical reaction. Some 57 of the 540 known shark species are thought to be capable of producing light, study co-author Jérôme Mallefet, head of the marine biology laboratory at UCLouvain, told CNN on Wednesday. 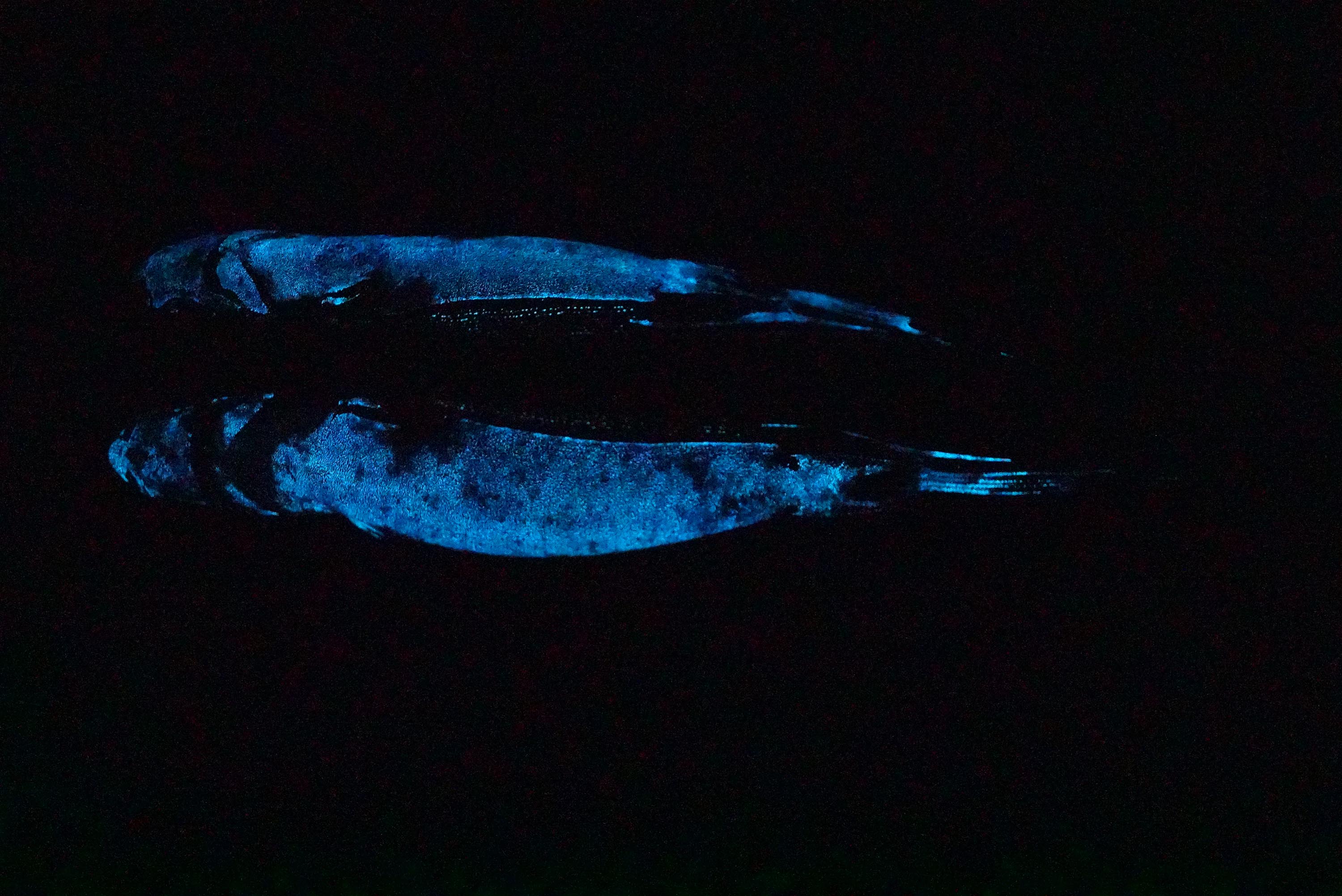 While specimens had previously shown that the kitefin shark should be capable of producing light, they are "really difficult to observe," as they live between 200 and 900 meters (656-2,953 feet) below the ocean's surface, Mallefet said.

Bioluminescence was also documented in two other species of deepwater shark, Etmopterus lucifer (the blackbelly lanternshark) and Etmopterus granulosus (southern lanternshark), as part of the research.

Mallefet noticed that the sharks had been caught accidentallyduring NIWA's trawling surveys, which are used to measure fish stocks, and contacted the organization.

He was invited to join a survey trip in January 2020 and spent 30 days on board the boat, capturing multiple sharks.

"I was just like a kid at the bottom of a Christmas tree," said Mallefet, describing how he managed to take a picture of a kitefin shark in a bucket in a dark room on the ship.

The deep sea below 200 meters (656 feet) is described as the twilight zone. Many people mistakenly believe there is no light visible there, but there is some light that the sharks find useful, Mallefet said.

"They use light to disappear," he said, explaining how bioluminescence can render the sharks invisible against the faint glow from the ocean's surface.

This protects the sharks from predators swimming below them, and also makes it easier for them to hunt prey, Mallefet said.

"We know that's the case for Dalatias licha," he said, as the remains of smaller sharks were found inside the bellies of some specimens despite the fact that the species is the slowest swimming shark in the world.

The luminous sharks haven't given up all of their secrets, however, including why their dorsal fin glows.

Further research is needed to work out whether this could be used for signaling, Mallefet said, adding: "There are still question marks."

Mallefet told CNN he would like to study the dorsal fin in greater detail on future trips to the area, as well as looking into what the sharks eat and whether they are eaten.

The aim is to find out more about the deep sea, which remains mysterious despite the fact that it's the most common environment on Earth, in order to make people think more about preserving it, he said.

"I fear that we have done a lot of mistakes throwing stuff in the sea," said Mallefet. "I fear what will happen for the next generations." 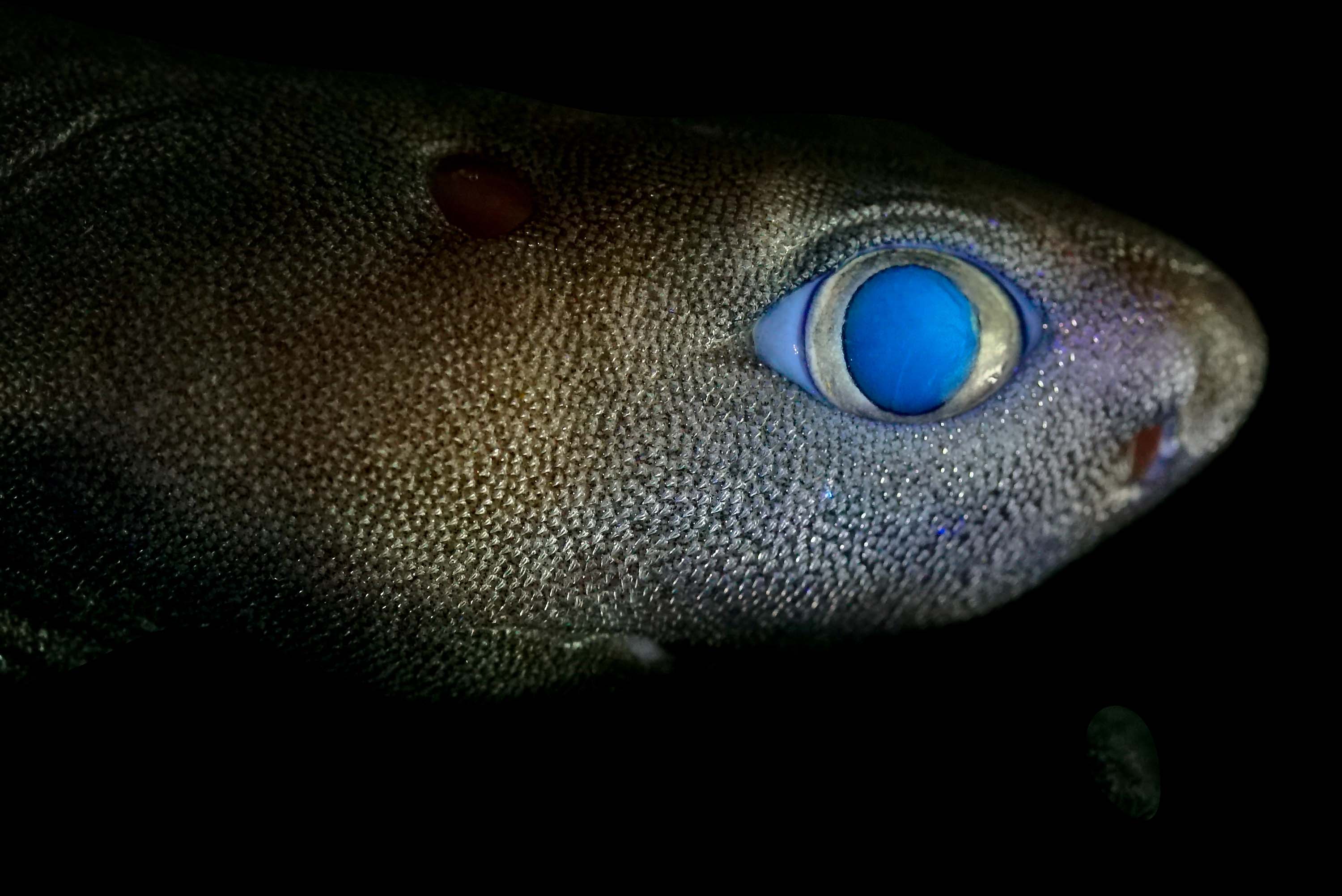