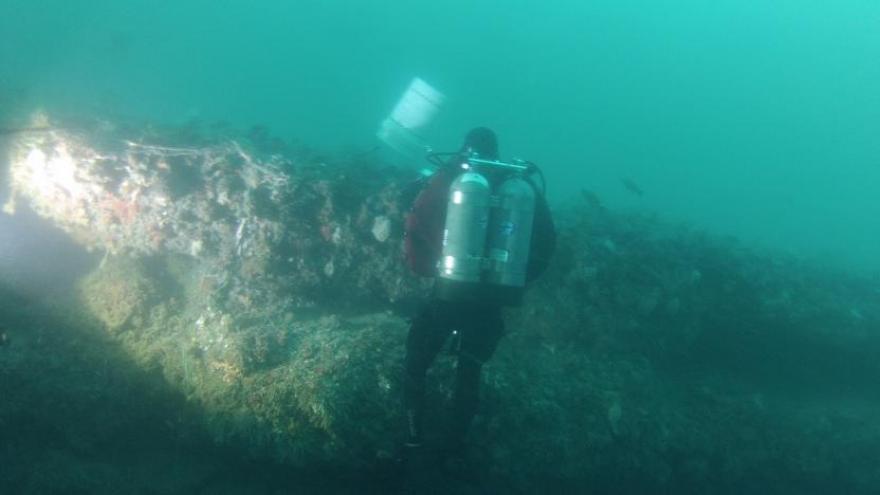 (CNN) -- Arguably, we know more about the surface of the moon that we do about our oceans. A group of scientists and explorers with specialized diving expertise are looking to change that.

In August, a team made up of members from the Mote Marine Laboratory, Florida Atlantic University, Georgia Institute of Technology and the US Geological Survey is set to explore a "blue hole" off the Gulf Coast of Florida. "Blue holes" are underwater sinkholes that open below the seabed.

The hole, dubbed "Green Banana," opens up at 155 feet below sea level. The bottom of the hole is at a depth of about 425 feet.

"We were supposed to actually go out to this hole back in the spring, but that got pushed back with Covid happening," Emily Hall, a staff scientist and program manager at the Mote Marine Laboratory, told CNN.

The purpose of the exploration is to learn more about "blue holes," a documented feature in the waters of Florida and around the world, that we know so little about.

In 2019, scientists gained access to a shallower hole they dubbed "Amberjack," because amberjack sharks like to congregate there. The hole sits 113 feet below the water and extends to a depth of 237 feet, about 30 miles offshore from Sarasota.

Exploring "Amberjack hole" allowed scientists to collect 17 water samples and 4 sediment cores. They also found two dead smalltooth sawfish, an endangered species, still intact. They were found in a deeper area of the hole where there's low dissolved oxygen in the water, which might have helped preserve them, based on a necropsy performed on one of the specimens.

Much like space exploration, the underwater mission scientists are about to embark on is open ended.

Underwater sinkholes are present all over the world, but there is no definitive tally, according to Jim Culter, a senior scientist and program manager at the Mote Marine Laboratory. They occur in areas of the world where karst, a type of porous limestone, is found.

Some "blue holes" are too deep into the sea to be spotted from above and are only discovered through word of mouth information between divers and fishermen.

There are "blue holes" all around the Florida shores, as high up as in the Panhandle area, and as low as below Naples, Culter told CNN. He and his team have visited at least 20 locations around Florida, some closer to the shore and others over 20 miles offshore.

"Blue holes" are hotspots of ecological diversity amid a barren sea floor, attracting marine creatures from sharks to sea turtles, to corals and sponges, and much more.

"It's like an oasis in the ocean," Culter told CNN.

Fish congregate around the rim and swim into the holes -- Culter said he has seen them go as deep as 30 to 40 feet into them while exploring "Amberjack hole." Below that depth, water temperature, its pH, and level of dissolved oxygen drop significantly, making the bottom of the holes an unfriendly environment for marine creatures.

"As far as the chemistry is concerned, which affects the biology, one really cool thing about these holes that we've seen so far is that there are higher levels of nutrients," Hall told CNN.

It will be important to establish why that is, and also whether the holes are a source of nutrients for the surrounding Gulf water as well, Hall explained.

The carbonate chemistry in the holes is unique, and from learning more about it, scientists hope to glean insights on the global carbon cycle and ocean acidification tied to climate change.

Scientists are also interested in understanding the relationship between the holes and groundwater. A USGS analysis of water samples from "Amberjack hole" revealed it contained radium and radon isotopes, present in groundwater. "Our colleague did seem to find some indications in Amberjack that there is connectivity even as far down as 60 meters (196 feet)," Hall told CNN.

From a biological standpoint, there are definitely unusual things taking place in the "blue holes."

While Culter says the team hasn't found any new species within them so far, Hall mentioned the presence in "Amberjack hole" of "Karenia Asterichroma," a toxic planktonic organism first discovered in 2004 in the Pacific Ocean. They found it there while sampling for the presence of "Karenia Brevis," a different species that contributes to the phenomenon of red tides.

While "Amberjack hole" has a tighter rim and a wider bottom, "Green Banana" has a restriction about mid-way, like an hourglass.

"It's going to make it pretty difficult to get some of the equipment and some of the teams down into the bottom of the hole, but we're working really hard on trying to come up with the best way to strategically do that and keep everyone safe," Hall told CNN.

The team uses a device called a "Benthic Lander," a tool weighing roughly 600 pounds, according to the National Oceanic and Atmospheric Administration. It will sit inside the hole for 24 hours to collect relevant samples from the sediments and from the water, while divers explore it for shorter stints.

RELATED: Conservationists warn Covid waste may result in 'more masks than jellyfish' in the sea

Diving into "blue holes" is a much different endeavor than what even the most skilled open water divers are used to, and it requires not only proficiency with cave diving, but also advanced technical certifications to go over the depth limit of 130 feet.

These certifications come with extra requirements in terms of physical check-ups and training, Hall explained. She is certified to reach a depth of 200 feet, and when she dives, she usually stays around the rim conducting water and biological sampling.

"Jim and our technical divers can go down deeper," Hall explained.

What it takes to dive over 400 feet below the sea

Diving deeper has its own set of challenges, Culter explained.

"As you go deeper and stay longer, you have to worry about decompression illness. That happens when you accumulate too much nitrogen in your body tissues, then you have to come up slowly so that the nitrogen doesn't try to bubble out of your blood," Culter told CNN.

Nitrogen also has a narcotic effect and can give divers tunnel vision. Another concern is the level of oxygen in the blood. Culter explained it needs to be lower than on the ground in order to avoid toxic effects, which can cause seizures.

"The way we get around it is we change what we are breathing," he said. Instead of breathing compressed air, helium is added to the mixture.

"The addition of helium reduces both effects -- you don't have the oxygen toxicity or the nitrogen narcosis," he added.

Rather than using "open circuit" equipment, which expels the exhaled breath into the water, some divers use so-called "rebreathers," recirculating the air and replenishing the oxygen consumed by the diver. This allows divers to use smaller tanks that will last longer, Culter told CNN.

Coming back to the surface after spending time at the bottom of a "blue hole" is a lengthy process, as the body needs to decompress at a slow pace.

While exploring "Amberjack hole," Culter was at a 300 feet depth for about 7 minutes, and spent almost an hour getting back to the surface gradually.

"For divers going to the bottom of 'Green Banana,' over 400 feet, that might take closer to two hours," Culter told CNN.

The will to go deeper

Exploring "blue holes" is a scientific challenge like no other.

"One of the things that I really love about this mission is that it is exploratory research. We don't know what we're going to find," Hall told CNN.

This type of open-ended research is rare nowadays, according to Culter. "Our economic climate is one where people want specific results," Culter said, something that can't take place before an exploratory phase. "Science builds on small steps," Culter added.

Scientific goals overlap with personal goals for Hall, as she continues studying these environments. She hopes to be soon certified to reach a depth over 200 feet below the sea.

"Jim always tells me, he always says, 'you're going to think, if I could just go a little further...' and he's absolutely right. You keep wanting to look, and look, and go down, and down, and down."

"It's really neat and exciting to be able to do it," Hall added.