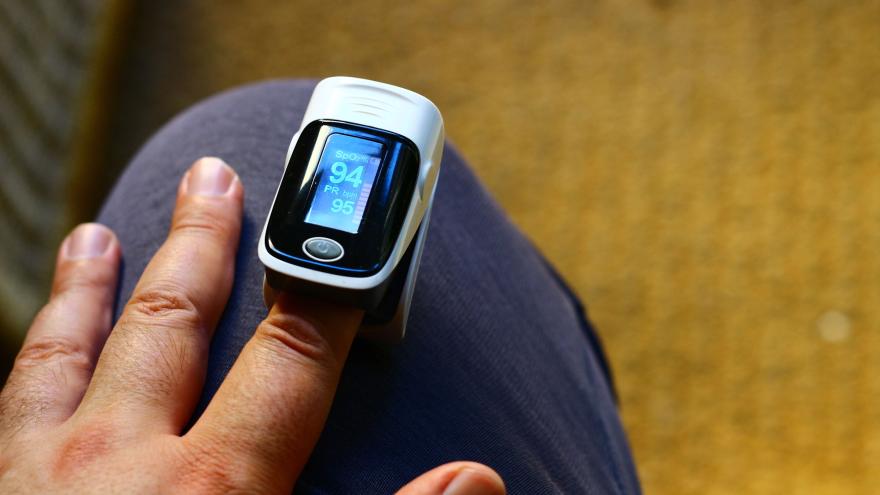 (CNN) -- Often when Dr. Thomas Valley sees a new patient in the intensive care unit at Michigan Medicine in Ann Arbor, he clamps a pulse oximeter on their finger -- one of the many devices he uses to gauge their health and what course of care they might require, whether they are a child having seizures, a teenage car accident victim or an older person with Covid-19.

But recently, Valley, an assistant professor in the University of Michigan's Division of Pulmonary and Critical Care, realized first-hand that the small devicemay yield less accurate oxygen readings in patients with dark skin.

One end of the device sends light through the finger while a sensor on the other side receives this light and uses it to detect the color of your blood; bright red blood is highly oxygenated, while blue or purplish blood is less. If the device isn't calibrated for darker skin tones, the pigmentation of the skin could affect how the light is absorbed by the sensor, leading to flawed oxygen readings.

"At the time, it was during the spring 2020 surge in Michigan, and we didn't actually put together that this was a problem of race," Valley told CNN. "We thought potentially, this was a problem of Covid, because that's what we were being inundated with -- hundreds of patients with Covid."

Before the pandemic, the majority of Valley's patients at Michigan Medicine were White. But as the hospital treated more Covid-19 patients, Valley realized that many were Black or brown patients coming from other overburdened facilities.

Since then, Valley and his colleagues have collected data on how often pulse oximeters overestimate oxygen levels among their Black and brown patients. Their findings suggest that Black patients have nearly three times the frequency as White patients of experiencing blood oxygen levels less than 88% despite showing 92% to 96% on a pulse oximetry device. A normal level of oxygen is usually around 95% or higher.

"I still struggle with what to do when I have a Black patient who has a pulse oximeter value that's marginal," he said. "I think for an individual at home, I think it heightens the need to take your symptoms into account."

Valley's and his colleagues' experiences add to a growing body of research -- dating back to the 1980s -- that suggests flawed pulse oximeter readings among Black and brown patients can be a real and life-threatening issue in medical care.

The latest study on flawed pulse oximeter readings, published Monday in the journal JAMA Internal Medicine and which Valley was not involved in, found that among more than 3,000 hospitalized patients receiving intensive care, Asian, Black and Hispanic patients received less supplemental oxygen than White patients, and that was associated with differences in their pulse oximeter readings.

Research published by Valley and his colleagues last week in the medical journal BMJ found that Black patients had higher odds than White patients of having low blood oxygen noted in their blood-drawn readings but not detected by pulse oximetry. That finding was based on data from the Veterans Health Administration where pulse oximeter readings were paired with oxygen level measurements from drawing blood.

A separate study of about 7,000 Covid-19 patients, previously published in May in the journal JAMA Internal Medicine, found that compared with White patients, pulse oximetry overestimated oxygen levels in the blood by an average of 1.7% among Asian patients, 1.2% among Black patients and 1.1% among Hispanic patients. That overestimation may have contributed to an unrecognized or delayed recognition of a patient's eligibility to receive certain Covid-19 therapies.

'The consequences of the neglect ... has been revealed'

But only just recently the public has been made more aware of this health disparity, and US health officials have announced plans to investigate the accuracy of pulse oximeters.

"There was a study just like ours done in 1990, but at a smaller scale at a single center. The problem from 1990 to 2020 is really a problem in dissemination and education. In medical school, in residency, in fellowship, I didn't know about this problem," he said. "It's not that we're now using pulse oximeters more often. I use a pulse oximeter every day, multiple times a day, all day in the intensive care unit, and that's unchanged from 10 years ago. It's almost like my right hand in an intensive care unit. We depend on what someone's oxygen levels are."

The pulse oximeter was invented in 1974 by Japanese bioengineer Dr. Takuo Aoyagi, who died at the age of 84 in 2020 -- the same year Covid-19, a disease whose symptoms are monitored with pulse oximetry, was declared a public health emergency of international concern.

Some experts view the pandemic as shedding more of a spotlight on the pulse oximeter's limitations in measuring oxygen levels among Black and brown patients.

"I think that the Covid-19 pandemic has exacerbated this issue," said Rutendo Jakachira, a Ph.D. student in Brown University's Department of Physics, who is studying racial disparities in pulse oximetry.

"People have known that there's an issue with the over-estimation of these oxygen saturation levels, particularly in dark-skinned patients, but they did not appreciate the significance of this issue until the Covid-19 pandemic," she said. "The pandemic has seen an increased use of pulse oximeters in the hospital and in the home setting and thus the consequences of the neglect of the issues with errors in these pulse oximeter has been revealed."

Jakachira and her research adviser Kimani Toussaint argue that in the years following Aoyagi's invention, not enough clinical testing was done to improve the device to ensure equity across all demographics and skin tones.

"So, one thing that should be done immediately is improved calibration testing," Jakachira said, adding that currently, guidelines from the US Food and Drug Administration recommend such testing on pulse oximeters include at least 10 healthy subjects that vary in age and gender with a range of skin pigmentations, of which two individuals or 15% of the group -- "whichever is larger," the FDA guidance indicates -- have dark skin.

"This is probably not sufficient and not to draw statistical conclusions on disparities," she said. "So, using a more diverse population, calibration would be a great first step."

In April, the FDA issued new draft guidance that recommends companies making medical products should develop and submit a "race and ethnicity diversity plan" to the agency early in their development of products, and that plan should include enrolling diverse groups of people into their clinical trials.

Jakachira, Toussaint and their colleagues are developing non-invasive methods to make pulse oximeters more accurate in their blood oxygen readings for people with dark skin tones.

"What we're working on, we're trying to mitigate the skin tone issues by doing something interesting with the light, but it's a significant challenge and this really highlights the need to have diversity and inclusion," said Toussaint, a professor and senior associate dean in the School of Engineering at Brown University.

When pulse oximeters send beams of light through the fingertips to gauge blood oxygen levels, they are measuring how much oxygen has been absorbed by a certain molecule in the blood called hemoglobin. It turns out that both melanin and hemoglobin absorb light at similar wavelengths and separating out their relative contributions is what can be challenging. Melanin is the substance that produces pigmentation in our skin, hair and eyes.

"So, the melanin will overlap with the absorption properties of the hemoglobin in your blood," Toussaint said, which can lead to the pulse oximeter's flawed blood oxygen readings, as different people have different amounts of melanin.

The approach that Jakachira and Toussaint are taking in their quest for a solution is to try to cancel out the effect that absorbed melanin can have on how pulse oximeters measure blood oxygen levels.

"That's something that we think would be certainly a contribution but maybe translatable to other similar-based technologies that are not just pulse oximeters," Toussaint said, adding that he could not share additional details of this work as the research team is currently completing a patent application.

The US Food and Drug Administration plans to convene a meeting of its medical devices advisers later this year to evaluate how pulse oximeters may yield inaccurate oxygen readings among people of color.

A patient's oxygen levels are sometimes called the "fifth vital sign," and there is growing distress around how such investigations into how pulse oximeter inaccuracies among people of color did not occur sooner, according to an editorial that published Monday in the journal JAMA Internal Medicine.

"While the technical limitations of the pulse oximeter have been recognized for more than 30 years, investigations into clinical implications of hidden hypoxemia in patients with darker skin have been relatively (and distressingly) recent," Dr. Eric Ward of the University of California, San Francisco, and Dr. Mitchell Katz of NYC Health + Hospitals, wrote in their editorial.

They described one plan of action for change.

"Devices exist that perform more equitably but have never been widely distributed," Ward and Katz wrote. "Health care systems, including academic centers, are large-scale purchasers of pulse oximeters. If they make a commitment to buy only devices that function across skin tones, manufacturers would respond."