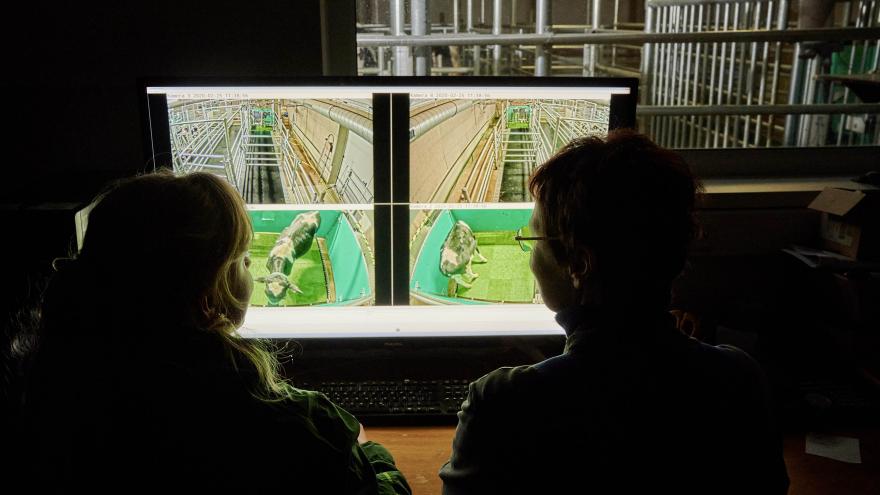 "It's usually assumed that cattle are not capable of controlling defecation or urination," said Jan Langbein, co-author of a study published Monday in the journal Current Biology.

Farmed cattle produce roughly 66-88 pounds of feces and 8 gallons of urine each day and are free to relieve themselves where they please. However, the spread of their waste into the soil can have negative effects on the environment.

Agriculture is the largest source of global ammonia emissions, and livestock farming makes up more than half of that contribution, the researchers noted in a press release, adding that in Europe, 90% of ammonia emissions come from agriculture.

While the ammonia produced from cow waste doesn't directly contribute to climate change, when mixed with soil it is converted into nitrous oxide, a greenhouse gas. It also contaminates the soil and local waterways.

The main question for Langbein, an animal psychologist at the Research Institute for Farm Animal Biology (FBN) in Germany, and his team was: "Why shouldn't (cattle) be able to learn how to use a toilet? Animals are quite clever, and they can learn a lot." Langbein said in a statement.

The team of scientists from FBN and FLI in Germany and the University of Auckland in New Zealand began to potty-train the calves, in a process they called "MooLoo training."

In the first phase of training, the cattle were put in a closed latrine. And whenever they urinated, they were given a reward of either electrolyte mixture or crushed barley.

"Once they were allowed outside, the calves would go in the toilet to get their reward, but they soon learned that there's only a reward if they urinate." FBN's Neele Dirksen, first author of the study, told CNN.

To encourage calves to use the toilets, researchers also came up with a deterrent. "We first used in-ear headphones and we played a very nasty sound whenever they urinated outside," said Langbein. "We thought this would punish the animals, but they didn't care. Ultimately, a splash of water worked well as a gentle deterrent."

The calves were trained for 45 minutes every other day. And after 10 training days, the team had managed to successfully train 11 out of the 16 calves involved in the experiment.

The results showed that calves performed at a similar level to children when learning to potty-train, and did better than very young children.

The study showed that it is possible to potty-train calves, and Langbein said he hoped that "in a few years all cows will go to a toilet."