Schumer warns on debt ceiling: 'It's not too late, but it's getting dangerously close' 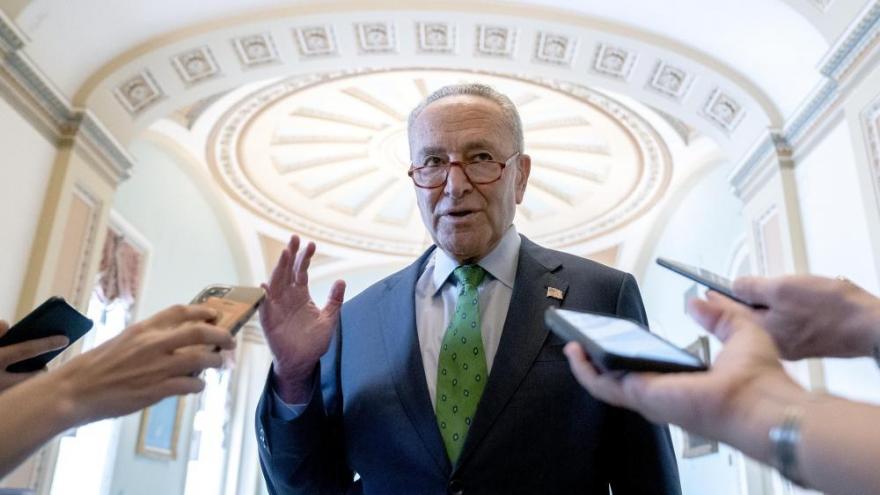 Senate Majority Leader Chuck Schumer warned on Tuesday that action must be taken soon to avert a debt limit crisis. Schumer is shown here at the U.S. Capitol in Washington, DC, on Monday, Oct. 4, 2021.

(CNN) -- Senate Majority Leader Chuck Schumer warned on Tuesday that action must be taken soon to avert a debt limit crisis, saying in a floor speech, "it's not too late, but it's getting dangerously close," as a key deadline looms on October 18.

Treasury Secretary Janet Yellen has warned lawmakers that the federal government will likely run out of cash by October 18 unless Congress raises the debt ceiling. But Congress might not even have that long.

That's because October 18 is not a set-in-stone deadline. It's more of a best guess estimate of when the money will run out, which makes it far harder to know exactly when Congress would need to act to avert potential financial catastrophe -- and increases the odds that lawmakers could accidentally trigger a default by not acting soon enough.

RELATED: Debt ceiling: What to know as Congress nears an October 18 deadline

Democrats and Republicans remain at an impasse over how to resolve the issue. Republicans insist that Democrats, who control both chambers of Congress and the White House, should act alone using a process known as budget reconciliation, which can pass on the current Democratic majority alone. Democratic leaders argue that raising the debt limit is a shared bipartisan responsibility and have so far described the use of reconciliation as a non-starter, noting that it would be an unwieldy and time-consuming path to go down and warning that the risks are too high to do so.

Democrats are now attempting to pressure Republicans to allow them to approve a debt limit increase by a simple majority vote without Republicans filibustering it. But there is no indication so far that strategy will succeed.

Schumer said that the Senate will vote Wednesday to break a filibuster on a House-passed bill to suspend the debt ceiling through December 2022, temporarily averting the current crisis. But Republicans are expected to block it from advancing as they've maintained they will not help Democrats address the debt limit.

"We're telling Republicans, 'we're not asking you to vote for it, just let us vote for it,'" Schumer said, adding, "The minority party can get out of the way and let the majority supply the votes."

At a press conference later on Tuesday afternoon, Schumer refused to rule out using reconciliation to raise the debt ceiling should the procedural vote fail to garner the support of 10 Republicans.

"Reconciliation is a drawn out, convoluted process," he said. "We've shown the best way to go. We are moving forward in that direction."