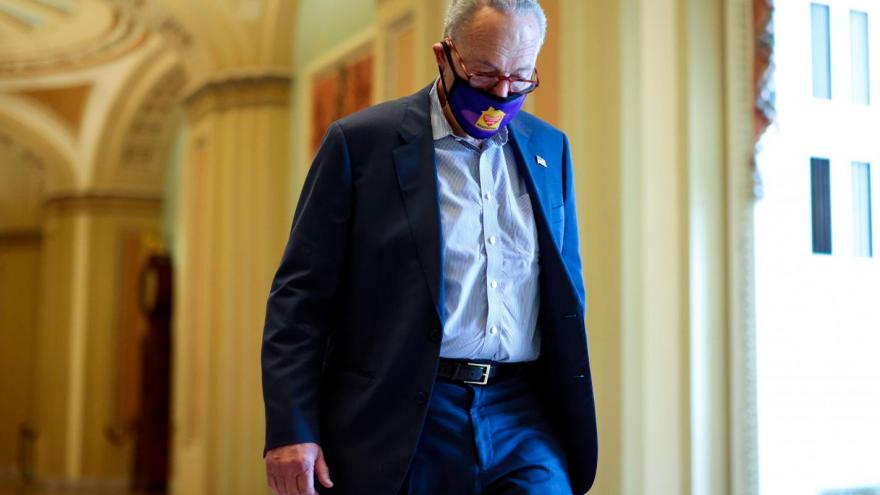 Senate Majority Leader Chuck Schumer, pictured here, at the U.S. Capitol on Sept. 29, says Senate Democrats will try to negotiate with moderate Sens. Joe Manchin and Kyrsten Sinema to address their disagreements on the economic package.

(CNN) -- Senate Democrats will try to negotiate with moderate Sens. Joe Manchin and Kyrsten Sinema to address their disagreements on the size and scope of President Joe Biden's economic package as it heads to the chamber, Senate Majority Leader Chuck Schumer said Sunday.

"The House did a very strong bill. Everyone knows that Manchin and Sinema have their concerns, but we're going to try to negotiate with them and get a very strong, bold bill out of the Senate which will then go back to the House and pass," Schumer, a New York Democrat, said during a news briefing, stressing the importance of party unity.

The comments from the leader come days after House Democrats passed the Build Back Better bill, a key piece of Biden's sweeping domestic agenda. The $1.9 trillion plan, however, faces hurdles in the Senate, where Manchin of West Virginia and Sinema of Arizona have voiced concerns over its reach and price tag.

Schumer held the Sunday briefing to stress the importance of including a provision in the Build Back Better bill that would lower the cost of insulin. The bill passed by the House last week capped what Americans pay for insulin at $35 a month, something Sinema affirmed her support for earlier this month.

Schumer insisted Democrats are "in very good shape to get 50 votes," but that he knows Republicans will look for ways "to try to knock it out."

The leader said his party would like to finish the bill with the insulin provision in it by Christmas.

Meanwhile, Sen. Kirsten Gillibrand, another Democrat from New York, said on Sunday that she's still optimistic Manchin will eventually support paid family and medical leave in the Senate version of the plan, a proposal he has repeatedly opposed.

"I think Sen. Manchin and I can come together hopefully in the next couple of weeks on something that could be included in this package," she said. "I'm hopeful that if I can use the next three weeks to really impress upon Sen. Manchin that some things can only be done with Democrats -- only that now is the only time to do that, perhaps, in the next decade."

Days before House Speaker Nancy Pelosi, in a major shift, had announced that four weeks of paid family and medical leave would be added back into the social spending bill, Manchin had made clear he would not budge on his position on the provision, telling reporters: "I just can't do it."

Among other things, the Build Back Better bill would create a universal pre-K program, extend the enhanced child tax credit and expand access to health care, affordable housing and home care for seniors.