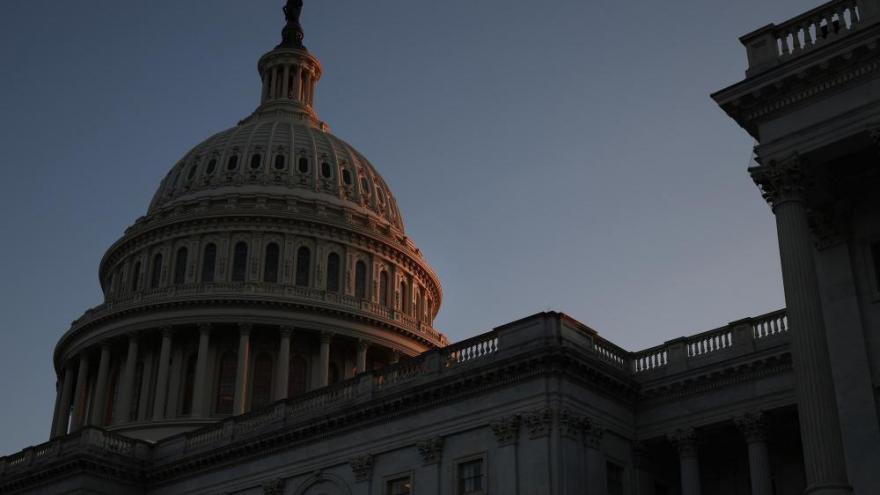 Senate Majority Leader Chuck Schumer moved to cut off debate on the $1.2 trillion bipartisan infrastructure bill, paving the way for swift passage of the sweeping legislation and pictured, US Capitol on August 2, in Washington, DC.

(CNN) -- Senate Majority Leader Chuck Schumer moved on Thursday night to cut off debate on the $1.2 trillion bipartisan infrastructure bill, paving the way for swift passage of the sweeping legislation that would enact key elements of President Joe Biden's economic agenda, although exact timing of a final vote is still unclear.

Schumer's move to file cloture sets up a key procedural vote on Saturday, which needs 60 votes to end debate on the bill.

But senators are still having discussions about a series of votes late Thursday, including a possible vote on final passage. However, given the timing, that seems increasingly unlikely.

If the procedural vote goes forward on Saturday, and 60 senators vote to advance the bill, then there would be a limited time for debate followed by additional votes -- and then final passage. At that point, passage could occur as early as Saturday if all senators agree. If not, the vote would slip until early next week.

Schumer said in floor remarks on Thursday night that Democrats and Republicans have worked all day and are still hashing out an agreement to move to final amendment votes on the bill, but "we aren't there yet."

He added: "If we come to an agreement yet tonight, which is our preference...we will have additional votes on amendments. I believe we're very close to an agreement and see no reason why we can't complete this important bipartisan bill. So I urge both sides to continue working diligently to make it happen."

The massive bipartisan infrastructure package, called the Infrastructure Investment and Jobs Act, represents a major bipartisan achievement that will allow both parties to claim victory. It features $550 billion in new federal spending over five years. The measure invests $110 billion in funding toward roads, bridges and major projects, $66 billion in passenger and freight rail, $65 billion to rebuild the electric grid, $65 billion to expand broadband Internet access, $39 billion to modernize and expand transit systems and $7.5 billion to create the first federal network of charging stations for electric vehicles. The bill additionally includes $55 billion for water infrastructure, $15 billion of which will be directed toward replacing lead pipes.

Schumer's decision to wind down debate is a delicate one as he works to successfully shepherd a major Democratic legislative priority through the Senate. The Senate has been debating and voting on amendments to the legislation throughout the week. Amendment votes got underway on Monday after the Senate held a rare weekend session as bipartisan negotiators raced to finalize the bill text, which was finally unveiled Sunday evening.

Republicans have warned Schumer not to "rush" the process -- and have called for him to provide adequate time for members to consider the roughly 2,000-page legislation, which was only released several days ago, as well as allow for a robust amendment process.

At a press conference on Tuesday, Senate Minority Leader Mitch McConnell cautioned that if Schumer ended debate on the bipartisan infrastructure bill too soon, he would urge his members to block it.

But after more amendment votes on Tuesday and Wednesday, including one backed by Republican Sen. Ron Johnson that would prohibit the cancellation of border wall contracts, which ultimately failed, key GOP senators have signaled they're ready to press forward.

Senators voted on over a dozen amendments. A series of bipartisan amendments were adopted by wide margins, including one that provides funding for Native American health care facilities and another aimed to address the workforce shortage in the wireless and broadband industries.

Another amendment -- backed by what the majority leader called the "uncommon pairing" of Sens. Raphael Warnock, a Georgia Democrat, and Ted Cruz, a Texas Republican -- was so popular it was adopted by voice vote. "Miracles happen," Schumer quipped. Their amendment designates additional high priority corridors on the National Highway system.

Schumer faces a balancing act as he pursues a dual track strategy, aiming to swiftly pass the bipartisan infrastructure legislation in order to "immediately" move to adopt the Democrats' budget resolution, which will lay the groundwork for passage of an even more sweeping infrastructure package with a potential price tag of $3.5 trillion that can be passed without GOP support and include Biden's priorities left out of the bipartisan bill.

Another motivator for senators to speedily wrap up the bill is the chamber's scheduled August recess that starts August 9. Schumer has warned he'll keep the Senate in session until they pass both the bipartisan infrastructure bill and a budget resolution with reconciliation instructions.