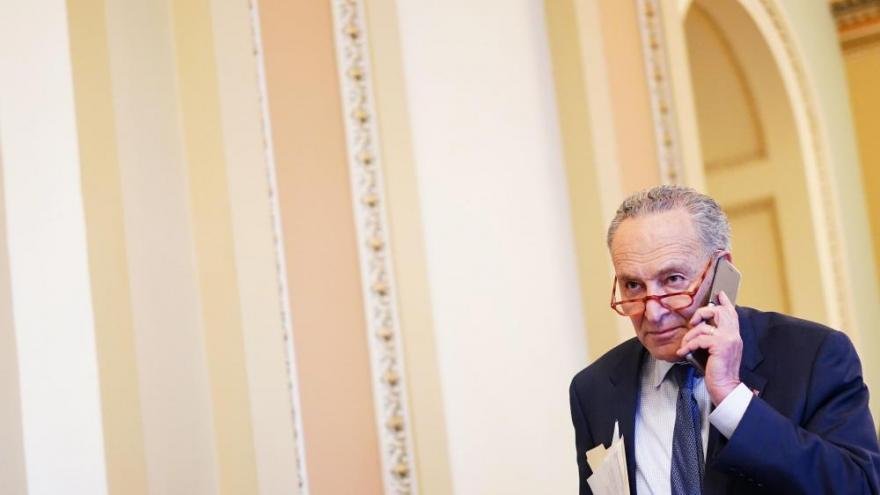 Schumer talks on his phone before the Senate impeachment vote on Capitol Hill in Washington, DC on February 5, 2020. Schumer and a group of other Senate Democrats introduced draft legislation on July 14 that would decriminalize marijuana at the federal level.

(CNN) -- Senate Majority Leader Chuck Schumer and a group of other Senate Democrats introduced draft legislation on Wednesday that would decriminalize marijuana at the federal level by striking it from the federal controlled substances list.

It's significant for a Senate majority leader to back such a measure and the move highlights the evolving politics of cannabis policy. At a news conference, Schumer vowed to "use my clout as majority leader to make this a priority in the Senate." At the same time, the proposal remains a draft bill at this point and marks only an initial step in advancing any kind of legislation. Schumer said himself that "this is going to be a process" and indicated that the proposal will now be circulated among lawmakers with the hopes of garnering more support.

Schumer highlighted his push for the legislation Wednesday with Sens. Cory Booker of New Jersey and Ron Wyden of Oregon.

"Today is a big day in the Senate," Schumer said, "For the first time, I as majority leader, Senator Wyden as the Chairman of the Finance Committee and Senator Booker, one of the foremost champions for justice and equity here in the Senate, we are all joining together to release draft legislation to end the federal prohibition on cannabis. This is monumental because at long last we are taking steps in the Senate to right the wrongs of the failed war on drugs."

Schumer added, "I was the first Democratic leader to come out for the legalization of marijuana and I will use my clout as majority leader to make this a priority in the Senate."

Booker called it a "historic day," saying, "this is the first time in American history the majority leader of the United States Senate is leading the call to end prohibition of marijuana."

The Senate Majority Leader noted, however, "this is going to be a process. This is a draft bill. We intend to show it to all of the stakeholders. We don't have the votes necessary at this point, but we have a large majority of our caucus for it. We're going to show it to the others and say well what don't you like, what do you like, and we'll see if we can get the support."

Most legislation in the Senate would also require the votes of at least 10 Republicans to pass given the current 50-50 partisan split of the chamber where Democrats hold the narrowest possible majority with Vice President Kamala Harris able to act as a tie-breaking vote. Schumer said he is not considering adding the legislation to the current budget reconciliation package, which would allow the proposal to be passed with only 51 votes.

Harris supported legislation to decriminalize cannabis during her time in the Senate. President Joe Biden also publicly supports decriminalizing marijuana but has not endorsed the Schumer plan. When asked about outreach to the White House, Schumer said, "The White House knows we are introducing this legislation. We intend to show them the draft legislation and ask them to support it."

The Democratic senators emphasized that equity is an important piece of their efforts with the proposal. "Communities of color have paid such an awful price for the historical overcriminalization of marijuana that we want to make sure the money goes back to them," Schumer said.