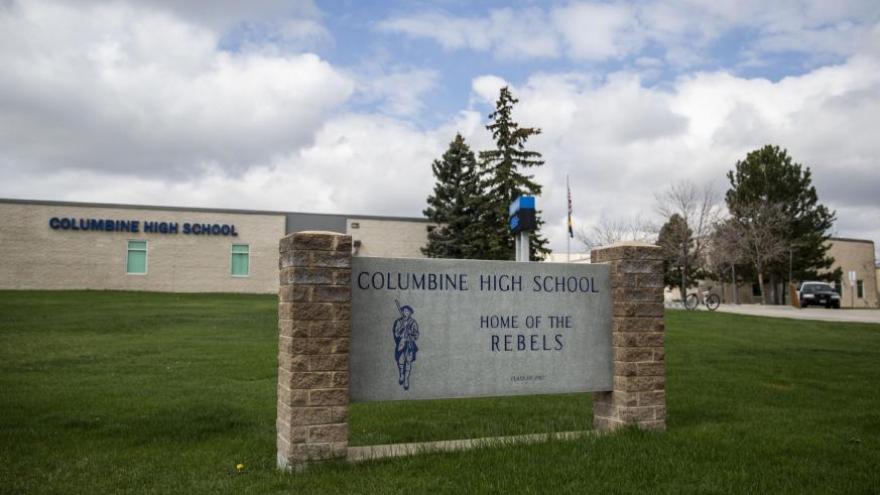 The outside of Columbine High School in Littleton, Colorado.

(CNN) -- Sometimes called "Columbiners," they romanticize and idealize the student killers behind the 1999 mass shooting that claimed 13 lives at Columbine High School in Littleton, Colorado.

Now, 20 years after the massacre, the Jeffco Public Schools district is asking its community whether the high school should be torn down and rebuilt in an effort to temper this subculture of online fans who remain infatuated with the killing and the teenage shooters.

"School shooters refer to and study the Columbine shooting as a macabre source of inspiration and motivation," Jason Glass, district superintendent, said in a letter to the community.

The move comes less than two months since the FBI said a high school student who was "infatuated" with the Columbine shooting traveled from Florida to Colorado and made credible threats.

The threats forced the closure of schools in 19 Colorado districts in April before the woman -- 18-year-old Sol Pais -- was found dead from an apparent self-inflicted gunshot wound, authorities said.

"We have to confront reality of what happened there," Glass told CNN Friday. "It's not that this community hasn't been confronting that for many years but ... it's time because the threats are increasing, the pressures are increasing on the school. It's time we decide if we're going to do something different."

Glass said Columbine is one of the safest schools anywhere, but the threats were mounting.

"We're in a conversation with the community right now," he said.

Glass wrote in his letter that the school has a gravitational pull for many.

"Annually, local law enforcement and Jeffco's Department of School Safety make contacts with hundreds of individuals seeking to enter the school and reconnect with the 1999 murders," the letter said.

"Most of them are there to satisfy curiosity or a macabre, but harmless, interest in the school. For a small group of others, there is a potential intent to do harm."

A record number of individuals have tried to enter the school illegally or trespass on the property as the tragedy marks its anniversary, Glass says.

"Since the morbid fascination with Columbine has been increasing over the years, rather than dissipating, we believe it is time for our community to consider this option for the existing Columbine building."

The letter said the administration is considering asking voters for an additional $60 million to $70 million in funds to build a new school.

The new school would retain the name, school mascot and colors, along with the preservation of the Hope Library, which was built after the shooting. The old building would be demolished and replaced with fields, the letter said.

"We are in the very preliminary and exploratory stages of these conversations," Glass writes.

The proposal was met with mixed reactions from those that lived through the mass shooting.

"I hate it," Will Beck, a survivor, told CNN. "Even though something bad happened there, it is a special place to me. It'd be devastating to lose it."

Frank DeAngelis, the principal at the time of the killings, announced his support for the proposal on Facebook.

"I am in full support of building a new facility. It is the people that make us a family not the building."

Being obsessed with Columbine does not, on its own, put someone at risk for committing violence. Still, a number of mass shooters in the past two decades have been inspired by or looked up to the Columbine shooters.

"We know that Columbine continues to attract people from around the world," John McDonald, the district's executive director for safety and security, said in April.