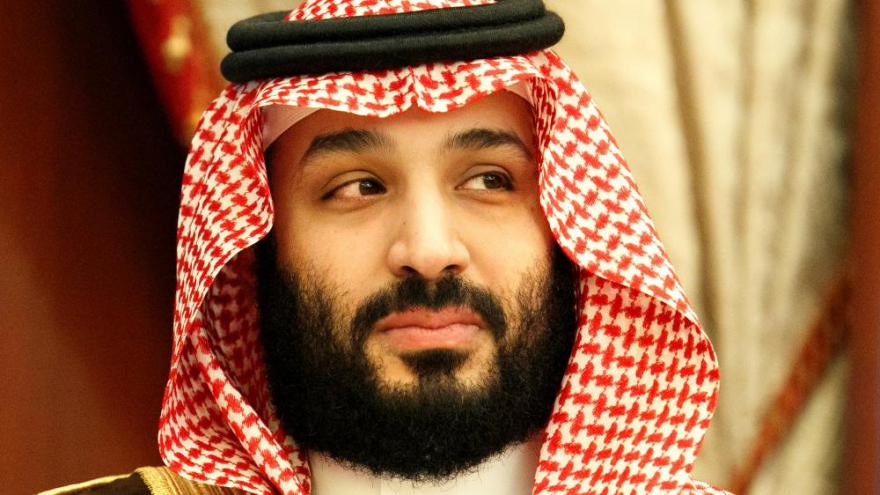 (CNN) -- A former top Saudi intelligence official who fell out with the Saudi Crown Prince is alleging that an assassination squad traveled from Saudi Arabia to Canada to try to kill him just days after journalist Jamal Khashoggi was murdered by members of the same group, according to a new legal complaint filed Thursday by the alleged target, Dr. Saad Aljabri, in DC District Court.

Aljabri accuses the Kingdom's powerful crown prince and defacto ruler, Mohammed bin Salman, known as MBS, of dispatching the hit team to murder him just over a year after Aljabri fled from Saudi Arabia and he refused repeated efforts by the Crown Prince to lure him back home or somewhere more accessible to the Saudis. Aljabri also names numerous alleged co-conspirators, including two of the men accused of being behind the Khashoggi operation.

MBS, according to previously unreported WhatsApp text messages referenced in the complaint, demanded that Aljabri immediately return to Saudi Arabia. As he repeatedly refused, Aljabri alleges the Crown Prince escalated his threats, saying they would use "all available means" and threatened to "take measures that would be harmful to you." The Crown Prince also barred Aljabri's children from leaving the country.

The Saudi government in Riyadh, the embassy in Washington and the Crown Prince's no-profit foundation did not immediately respond to requests for comment.

The US national security community has been tracking the Crown Prince's vendetta against Aljabri "at the highest levels" according to a former senior US official. "Everybody knows it," the former official said, "They know bin Salman wanted to lure Aljabri back to Saudi Arabia and failing that, that bin Salman would seek to find him outside with the intent to do him grave harm."

Nine months before Aljabri says the Saudi team landed in Canada to kill him, his son Khalid was warned by FBI agents about threats on Aljabri and his family's lives, according to the complaint. Khalid had arrived in Boston, and at Logan Airport, he was escorted to a meeting with two FBI agents, the complaint says, where he was purportedly told about bin Salman's "campaign to hunt Dr. Saad and his family in the United States, and urged them to exercise caution."

An adviser to Aljabri says the details on the Saudis who flew to Canada -- but were turned around at the airport -- came from western intelligence sources and private investigators.

Both the CIA and the FBI declined to comment. Officials on Capitol Hill who are aware of Aljabri's new allegations could not corroborate the intelligence behind them.

In a royal court, where proximity to the US is paramount, MBS's chief rival for the crown had been his older cousin Mohammed bin Nayef, similarly known as MBN. He and Aljabri, his longtime number two, had fostered close relationships with US intelligence officials over years of work together fighting terrorism, particularly against al Qaeda after 9/11. Aljabri's commitment and depth of knowledge had impressed US intelligence offers and helped save countless lives, former officials say.

In 2017, MBN was deposed and MBS was made the heir apparent to the throne of his father, King Salman. MBN was placed under house arrest and earlier this year was detained. Sensing trouble for those close to MBN, his right-hand man, Aljabri, who had already been removed from his post, fled to Turkey in mid-2017, leaving behind two of his children, Sarah and Omar.

Aljabri's extensive knowledge would have been more beneficial to the Crown Prince than his death, argues Douglas London, a former Senior CIA Operations Officer who served extensively in the Middle East and retired in 2019. The goal of the Saudi team supposedly sent to Canada, he says, may have been to put Aljabri under observation to be able to render him back to Saudi Arabia, or kill him later.

"MBS is eager to neutralize the threat posed by Aljabri, whose intimate knowledge of the ruling family's skeletons, and everyone else's, and broad network, equipped him to enable any aspiring challenger to the crown," London says. "I don't rule out the possibility that MBS wanted to kill Aljabri, but it's just as likely, if not more so, that were there a team deployed to Canada, MBS wanted to put Aljabri under observation, information from which might provide insight on his contacts and activities."

The allegations of the assassination squad are "credible," says fervent MBS critic Rep. Tom Malinowski, a Democrat from New Jersey and member of the House Foreign Affairs Committee.

"When somebody who we already know is responsible for the kidnapping, rendition, murder and torture of other people in this category sends you a text message warning that bad things will happen to you, it's fair to assume that he means business," Malinowski said.

The teenage children Aljabri left in the Kingdom were immediately barred from traveling, their father says, who pleaded with bin Salman to allow them to leave. The Crown Prince responded to the begging, Aljabri says, with WhatsApp messages saying "When I see you I will explain everything to you" and "I want you to come back tomorrow."

A Saudi warrant was issued and a notice was filed with Interpol to limit his movements, Aljabri says, also accusing MBS of pressuring Turkey to extradite him.

In mid-March of this year, according to Aljabri, now-22 year-old Omar and 20-year-old Sarah were abducted from their home and haven't been heard from since. The same month that the children had their travel permissions blocked, a relative of Aljabri's was snatched off the streets of Dubai, taken back to Saudi Arabai and tortured, Aljabri says. The relative says he was told explicitly, according to the complaint, that he was being punished as a proxy for Aljabri.

Meanwhile, since President Donald Trump came into office, his administration has fostered a close working relationship with MBS. In particular, senior adviser and son-in-law Jared Kushner reportedly developed direct correspondence with the 34-year-old ruler that continued at least through the Khashoggi ordeal.

Last month, a group of senators -- including the acting chairman of the Senate Intelligence Committee, Marco Rubio -- wrote to Trump calling on him to raise the issue of the Aljabri children with the Saudis, noting Aljabri's ties to US intelligence and saying: "the Saudi government is believed to be using the children as leverage to try to force their father's return to the kingdom from Canada."

The brutal murder and dismemberment of Khashoggi in the Saudi consulate in Istanbul put a spotlight on the Crown Prince's global campaign to violently stifle critics wherever they may be. Despite the US intelligence community assessing with high confidence that the execution was ordered by bin Salman, the failure by the Trump administration to condemn him has highlighted the impunity with which MBS operates. The Crown Prince denies any involvement in the operation while five members of the hit squad were sentenced to death by a Saudi court.

The assassins who killed Khashoggi were part of the Crown Prince's so-called "Tiger Squad," Aljabri says in his complaint, asserting that other members of the same team came after him. He claims the unit was born out of his own refusal to send counterterrorism forces under his command at the Interior Ministry to forcibly render a Saudi an insolent prince from Europe.

The Tiger Squad was formed, Aljabri says in the complaint, as a 50-strong "private death squad ... with one unifying mission: loyalty to the personal whims of Defendant bin Salman."

Aljabri's complaint says that around two weeks after Khashoggi was killed on October 2, 2018, 15 Saudi nationals arrived at Ottawa International Airport (the filing originally said Ontario but it has been corrected and is being resubmitted) with tourist visas to allegedly carry out the murder of Aljabri. Among them, he alleges, were multiple forensics specialists carrying "two bags of forensic tools" in their luggage.

According to the complaint, the team split up as they approached the customs kiosks but raised Canadian officials' suspicions who allegedly found photographic evidence showing some of the members together. After a lawyer from the Saudi embassy was called, the brief says, the members of the team agreed to be deported back to Saudi Arabia. One continued into Canada on a diplomatic passport, Aljabri's filing says.

The mission, Aljabri says, was supervised back in Saudi Arabia by Saud al-Qahtani who was sanctioned by the Treasury Department for planning and executing the killing of Khashoggi. A second official named by Aljabri as an orchestrator, Ahmed al-Assiri, was also part of the Crown Prince's inner circle and relieved of his duties after Khashoggi was murdered. Neither was given a stiffer punishment.

A Canadian cabinet minister declined to comment on the specific allegations made by Aljabri citing the legal proceedings, but said they are aware of foreign nationals having tried to monitor and threaten people in Canada.

"It is completely unacceptable and we will never tolerate foreign actors threatening Canada's national security or the safety of our citizens and residents," said Bill Blair, the Minister of Public Safety and Emergency Preparedness.

With the complaint, Aljabri is asking for a trial and seeking damages under the Torture Victim Protection Act and Alien Tort Statute. While the plot is said to have been attempted in Canada, a spokesman for Aljabri said the complaint is being filed in Washington because the suit alleges wrongdoing in the US.

Aljabri says the assassination attempt followed a campaign in both the US and Canada to hunt him down. He accuses MBS of using his non-profit foundation -- MiSK -- and the man who leads it, Bader Alasaker, of organizing agents in the US to find Aljabri.

One of them, Bijad Alharbi, a former close associate of Aljabri's, was successful in tracking Aljabri down in Toronto after speaking with his son in Boston, according to the complaint.

Though the attempt by the assassination team to enter Canada to kill him failed, Aljabri says, he believes the mission continues. He claims MBS has now secured a fatwa -- a religious ruling -- that allows him to kill Aljabri. Aljabri also accuses the Crown Prince of making other attempts to get to Aljabri in Canada, including sending agents across the border with the US by land.

This story has been updated to add comment from the Canadian government and reflect a corrected court filing from Aljabri's legal team.