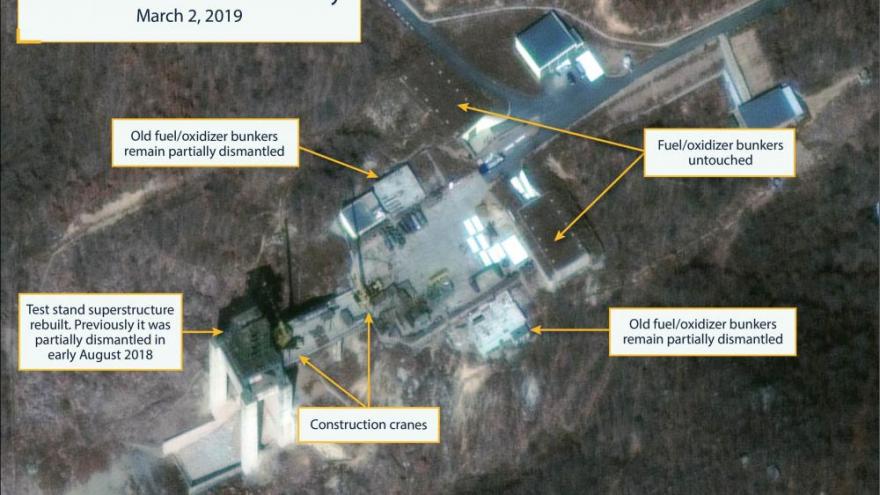 Commercial satellite imagery acquired on March 2, 2019 by the Center for Strategic International Studies and Beyond Parallel shows that North Korea is pursuing a rapid rebuilding of the long-range rocket site at Sohae.

The Center for Strategic Studies' Beyond Parallel project and 38 North, both respected North Korea monitoring websites, each said it had observed activity at the Tongchang-ri satellite launch facility, which has been dormant since about August of last year.

Tongchang-ri is one of the few known missile component development facilities inside North Korea.

38 North found that efforts to rebuild the site's launch pad and missile engine test stand began sometime between February 16 and March 2, meaning work began either in the days before, during, or immediately after North Korean leader Kim Jong Un and US President Donald Trump abruptly ended their second summit in Hanoi on February 28 without signing a deal.

Satellite launches use similar technology as ballistic missiles, and experts have long cautioned that North Korea's attempts to shoot satellites into space could help them develop viable long-range ballistic missiles.

Beyond Parallel reported there has been "activity" at a vertical engine test pad and a launch pad's rail-mounted rocket transfer structure. It concluded that the activity was "deliberate and purposeful."

South Korean lawmaker Lee Hye-hoon told CNN Wednesday that the country's National Intelligence Service (NIS) revealed in a briefing that there has been restoration activity at Tongchang-ri.

Speaking Wednesday, Trump said it was "too early to see" whether Kim had restarted the country's missile testing program but added that he would be "very disappointed" if that turned out to be the case.

Though the satellite images provide useful information, analysts and experts caution against reading too much into them without sufficient intelligence to complement.

"If North Korea does something they want us to know, they would say it. They haven't said anything," said Joseph Yun, the State Department's former special representative for North Korea policy.

"We don't know enough to say one way or the other. My own guess is it's too early to think that this is a response to happen in Hanoi," Yun said.

Joel Wit, a former State Department diplomat and founder of 38 North, said on Twitter that the movement at Tongchang-ri did not provide any evidence that North Korea was preparing to test an intercontinental ballistic missile.

But the activity is surprising. After Trump and Kim's first summit in Singapore, the US President appeared to tout reports that North Korea had begun dismantling the Sohae Satellite Launching Station, another name for Tongchang-ri.

Dave Schmerler, a senior research associate at the Center for Nonproliferation Studies specializing in satellite imagery analysis, said that the more notable development is the work being done to the engine test stand, where Pyongyang could theoretically improve the engines on its nuclear-capable missiles.

It's also possible that the activity at the facility is a chess move in North Korea's negotiating strategy, Schmerler said, to ratchet up pressure on Washington.

Trump and Pompeo have touted as progress the fact that North Korea has not conducted any missile or nuclear tests in more than a year.

"The site itself, in the macro-sense, is very transparent. And the North Koreans know we are always watching," he said.

"When they do something at Sohae, they know that this could very easily be in the public conversation for domestic American politics."

It's unclear if the recent developments will affect how the White House moves forward with North Korea.

US State Department spokesman Robert Palladino did not directly answer questions as to whether American diplomats have been in touch with North Korean officials since leaving Hanoi, only saying the two sides remain in "regular contact."

John Bolton, Trump's national security adviser, said Tuesday that following the Hanoi summit, he expects the North Koreans to soon reveal "if they're serious about the talks, whether they want to get back into them and fundamentally, whether they're committed to giving up their nuclear weapons program and everything associated with it. "

"If they're not willing to do it, President Trump has been very clear they're not going to get relief from the crushing economic sanctions that have been imposed on them and we'll look at ramping those sanctions up in fact," Bolton said.

Trump had previously said the two sides departed amicably from the summit and left the door open for negotiations.

The reports of activity at Tongchang-ri come just hours after South Korea's NIS reported that parts of the Yongbyon nuclear complex, including the reactor that is believed to produce weapons-grade plutonium, have not been active since the beginning of 2019.

The International Atomic Energy Agency announced similar findings earlier this week. The organization's general director, Yukiya Amano, said Monday the agency has not observed activity at several important facilities at Yongbyon but did see "indications of the ongoing use of the reported centrifuge enrichment facility."

38 North said shortly before the summit that there was no indication that the site's plutonium production reactor was operating. A post in January said that Yongbyon appeared to be "well maintained" but its main facilities "did not appear to be operating," except for what is believed to be the uranium enrichment plant.

Yongbyon is the only publicly known complex where North Korea produces fissile material for nuclear weapons, but experts have long believed North Korea operates a series of covert sites that contribute to its ballistic missile and nuclear weapons program.

Trump appeared to hint at the existence at least one of those during his news conference following the Hanoi summit, a second uranium enrichment plant. South Korean lawmaker Lee Eun-jae's office said that an "additional uranium facility" was discussed during the Hanoi summit.

While it's unclear what or where this site is, a team of North Korea open-source analysts published findings in the online news site The Diplomat in July revealing a covert uranium enrichment facility which the US government calls Kangsong.