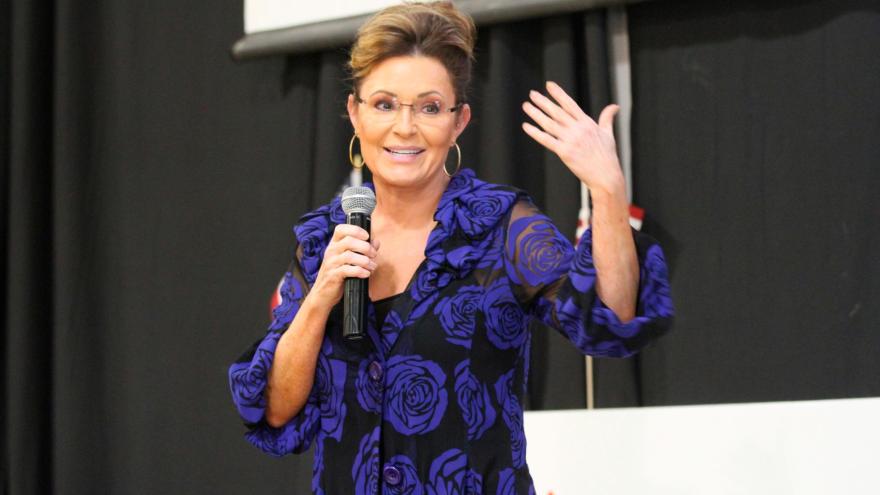 (CNN) -- The wildest congressional contest of 2022 is unfolding in Alaska, where the state's former governor and onetime Republican vice presidential candidate Sarah Palin is attempting a political comeback in a crowded field for a House seat that is open for the first time in nearly 50 years.

Palin was a late and last-minute entrant in the special election race, and her run was met with an immediate endorsement from former President Donald Trump -- who said in a statement that he was paying Palin back for her early support for his 2016 presidential bid.

But in Alaska, Trump's endorsement might not carry the weight it has in other open-seat contests across the 2022 primary map.

Palin is known on the national stage for the then-governor's 2008 bid for vice president as the late Sen. John McCain's out-of-nowhere selection as running mate. At home, though, many still resent Palin for quitting her job as governor in 2009, less than three years into her single term in office. Trump, meanwhile, ran behind many Alaska Republicans in 2020, though he won the state by 10 percentage points.

"I didn't vote for her. She quit in the middle of the job," said Alfred Rockwood, an 80-year-old retiree in Anchorage.

"She left a big stink in people's mouth when she quit after running (for vice president). That rubbed people the wrong way," said Kelly Lyons, a 46-year-old engineer in Anchorage.

The race to replace former Rep. Don Young, who died in March at 88 after representing Alaska in the House since 1973, has drawn a number of ambitious contenders who had been waiting years for an opening -- as well as dozens of candidates who have not done much campaigning, but ponied up the $100 filing fee anyway.

The Republican establishment is backing a member of the state's most prominent Democratic family. The Democratic Party is turning ferociously against the candidate it supported in a Senate race less than two years ago.

Oh, and Santa Claus is on the ballot -- and he has a chance.

In all, 48 candidates are on the ballots that were mailed to the state's voters, who must pick one and drop the ballot back in the mail by Saturday.

The top four finishers will advance to the special election on August 16. In that race, Alaska will use a ranked-choice system -- with voters not just picking their preferred candidate but listing them in order -- to determine the winner. That person will serve out the remainder of Young's term.

Further complicating matters: That same day in August, they'll also vote again in the regular House primary -- in which they will select only one candidate of the 31 running, determining which four move on to the November general election. Voters then will use the ranked-choice system again -- and the candidate who emerges victorious will serve a full two-year term in Washington.

Palin's campaign for Congress has been enigmatic. She has participated in some events and held a rally in Anchorage on June 2, which Trump called into. But she hasn't offered any sort of detailed agenda, and hasn't laid out where she sees herself fitting into the GOP in Washington. Palin's campaign did not respond to interview requests.

She said at a May candidate forum that she wanted to allow the state to drill and mine by protecting it from the influence of a "far-off faceless bureaucrat, or politician in some bubble, that's going to tell Alaska where and when and how we're going to develop our resources."

"The federal government needs to back off," she said. "Government, get off our back, get back on our side, and allow Alaskans to access our God-given natural resources that are created for mankind's responsible use."

But Palin's rivals have cast doubt on whether she could play the role Young long played as the advocate for Alaska's interests in Washington, no matter the cost to the rest of the country.

"I think her celebrity has outrun her. And even if she wanted to serve Alaska well, she can't get away from her celebrity status. I think it would be hard for her to settle in and do the work of a congresswoman," said John Coghill, a former state lawmaker whose father helped write Alaska's constitution.

"I think she's a wonderful person, personally," Coghill said. "But it is true that in Alaska, many people felt that when she went off on that presidential race, that she walked off on Alaska. She could have come back and said, 'OK, what's next,' and she didn't."

Among Alaska political observers and even the longer-shot candidates in the special election, there are three clear favorites to advance to the four-person runoff: Palin, Nick Begich III, a Republican member of Alaska's most prominent Democratic political family, and Al Gross, an independent who lost his 2020 Senate bid to GOP Sen. Dan Sullivan by 12 percentage points.

Those three candidates have provoked a series of unusual alliances and enemies.

Begich III -- the grandson of Nick Begich, the former Democratic House member whose plane disappeared in 1972 and has never been found -- had entered the regular House race planning to challenge Young months before his death, taking a conservative approach to federal spending that is out of Alaska's norm and criticizing the congressman for supporting the federal infrastructure bill. The Alaska Republican Party endorsed Begich III in the special election for the position once held by his grandfather -- Young was elected to the state's only House seat after the first Nick Begich was pronounced dead and held it until his own death in March.

The Alaska Democratic Party, meanwhile, has harshly rebuked Gross -- the wealthy independent candidate the party supported in the 2020 Senate race -- because he had suggested he might caucus with Republicans. After the state party's criticism, Gross reversed course and said he would caucus with Democrats, with his campaign citing the leaked draft Supreme Court opinion overturning Roe v. Wade. Still, state Democrats have kept up their attacks on Gross, urging voters to select one of the six registered Democrats on their special primary ballots.

The race for the fourth spot in the runoff, though, is wide open.

Alaska Democrats have urged the party's voters to go with one of the six registered Democrats in the race. Among the frontrunners in that pack are Anchorage assemblyman Christopher Constant and respected former state lawmaker Mary Peltola, who directs an inter-tribal fish commission in the vast western portion of the state, which is off Alaska's road system.

Peltola, who has a long track record working on Alaska-specific issues, said she has found voters are largely focused on national issues.

"This could be 1965. We're looking at another Cold War. We're discussing women's reproductive rights. We've got tension between different demographic groups," Peltola said. "It didn't really occur to me before I was running for this seat that we'd be talking about things as basic as democracy and civility and respectfulness."

Peltola once represented a state legislative district that is roughly the size of Oregon. If elected, she would become the first indigenous person to represent Alaska in Congress.

"Whether it's me or someone else, I just think it's high time that an Alaska Native be part of our congressional delegation," Peltola said.

She is one of four candidates vying for that history-making mantle as the first Alaska Native in Congress. The other leading contender in that pack is Republican Tara Sweeney, the former US assistant secretary of Native Affairs, who is backed by Alaska's Native corporations. Sweeney was Young's campaign co-chair.

Another Young campaign co-chair, Republican state Sen. Josh Revak, an Iraq war veteran, has the endorsement of Young's widow. Coghill, the former state lawmaker, is well-liked by many Republicans and could benefit from the ranked-choice system if he advances.

"They're just kind of that pent-up desire that Alaska needs a new representative and it should have happened a long time ago, and I'm willing to do it," Coghill said, explaining the field of candidates so packed that it required an entire page to fit them on the ballot.

Then there's Santa Claus, whose name alone might be enough to carry him into fourth place.

The 75-year-old North Pole councilman -- a portly, bearded Anglican monk who wears a red robe -- is an independent candidate who identifies as a democratic socialist and supported Vermont Sen. Bernie Sanders' presidential runs.

Claus has a real platform. He said he supports abortion rights, would back environmentally friendly policies that would protect the Arctic National Wildlife Refuge, and favors Medicare for All. He said he spoke with Young, a leading marijuana advocate, about how he had used cannabis after battling cancer.

Claus is only running in the special House election, and is not a candidate for the full term beginning in 2023. A fourth-month stint, he said, would allow him to "catch up after all the months since Don had passed and get to work." Every other candidate considered a serious contender is running in both elections.

"Whoever goes in for the short term, since we've been without representation for a while in the House, should spend their time working for the people of Alaska, not spending their time campaigning for the subsequent two-year term," Claus said.

Before changing his name from Thomas Patrick O'Connor in 2005, Claus spent time in several US cities. He earned a bachelor's and master's degree at New York University, and worked for the New York Police Department in the 1970s. He later lived in Colorado and Nevada, in skiing and resort communities where he often played Santa Claus during holiday events and became an advocate for at-risk children.

He said the name change came after he had grown out his beard and started playing Santa Claus for nonprofits at Lake Tahoe. On a walk on a snowy road in 2005, he had prayed about how he could use his Santa Claus-like appearance to help children. As he finished, he recalled, a white car drove by, and someone inside shouted: "Santa, I love you!"