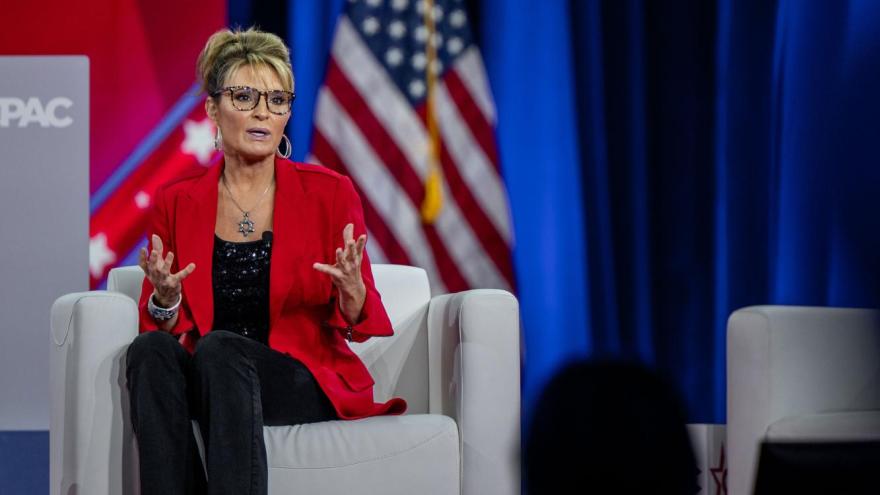 Alaska elections officials will tabulate the state's ranked-choice ballots for the first time on August 31, determining whether former Gov. Sarah Palin will make a political comeback by winning a special election for the state's lone House seat.

(CNN) -- Democrat Mary Peltola won the special election to fill Alaska's House seat for the remainder of 2022, according to unofficial results released by the Alaska Division of Elections, halting former Gov. Sarah Palin's bid at a political comeback.

Palin, the Republican Party's 2008 vice presidential nominee, will get another shot at the House race in a few months, as she and Peltola are among those vying to fill the full term in a separate election in November.

Peltola emerged as the victor Wednesday when Alaska's Division of Elections tabulated ranked-choice ballots in the state's first use of the system.

With her victory, the former state lawmaker will flip the seat held for nearly half a century by the late GOP Rep. Don Young, and is set to become the first Alaska Native in Congress.

The race for Young's seat had been viewed nationally through the lens of the attempted political comeback of Palin, who, after the 2008 presidential election, resigned midway through her lone term in the governor's office in 2009.

Palin, who has not run for office since leaving the governor's office, had been endorsed by former President Donald Trump. He called into tele-rallies for her campaign and appeared at an event in Alaska in July to back Palin and other Republican candidates he has endorsed in this year's races.

Palin criticized ranked-choice voting in a statement after the results were released on Wednesday, calling it a "new crazy, convoluted, confusing" system.

"Though we're disappointed in this outcome, Alaskans know I'm the last one who'll ever retreat. Instead, I'm going to reload. With optimism that Alaskans learn from this voting system mistake and correct it in the next election, let's work even harder to send an America First conservative to Washington in November," she said.

The special election process began when a field of 48 candidates -- including Santa Claus, a North Pole councilman and Vermont Sen. Bernie Sanders supporter -- was whittled down to a final four in a June primary in which candidates of all parties ran together on one ballot.

Palin; Peltola; Nick Begich III, a Republican businessman from the state's most famous Democratic political family; and independent Al Gross were the four that advanced. But shortly after the primary, Gross dropped out of the race, a move that consolidated Democratic support behind Peltola.

Peltola, meanwhile, sought to seize on the Supreme Court's decision ending federal abortion rights protections, campaigning as a pro-abortion rights, pro-labor union candidate with a deep connection to issues like fishing that are closely tied to Alaska's identity and economy.

Peltola's stint in the state legislature overlapped with Palin's governorship, and the two displayed a warm relationship on the campaign trail. Peltola also has connections to Young's family: Her father taught school with Young before he was elected to Congress. And Peltola once spent Thanksgiving with Young's family in the Washington, DC, area.

Alaska's Division of Elections ran its ranked-choice calculation at 8 p.m. ET on Wednesday, more than two weeks after Election Day. Elections in Alaska are conducted largely by mail, and because some votes come from remote regions disconnected from road systems, the state allows 10 extra days for ballots to arrive and be counted.

The state's voters in 2020 approved a measure to adopt a ranked-choice voting system: In open primaries that include candidates of all parties, voters cast one ballot for their top choice, and the top four vote-getters advance. Then, in the general election, voters rank those four candidates, first through fourth.

A wrench was thrown into the process when Gross dropped out of the race shortly after making it into the top four. Gross' exit simplified the ranked-choice system: Instead of potentially having to eliminate two candidates and tabulate those candidates' supporters' second- and third-place choices, Alaska had to only eliminate one: Begich, who got 28% of the vote in the August 16 election to Peltola's 40% and Palin's 31%.

The switch to ranked-choice voting appeared to go smoothly, despite the potential for confusion among voters who were casting primary ballots on August 16 for a single candidate for November's general election on the same day they were ranking the four candidates in order in the House special election.

"Alaskans are a pretty savvy bunch. We've elected independent governors, US senators with a write-in campaign. We're used to elections looking a little bit different than most places," said Jason Grenn, a former independent member of the state legislature who is now the executive director of Alaskans for Better Elections, a group that pushed for the ranked-choice voting system.

He was referring to former Gov. Bill Walker, an independent who is running again this year against Republican Gov. Mike Dunleavy, as well as Sen. Lisa Murkowski, a Republican who in 2010 lost the Republican primary to Tea Party candidate Joe Miller but then won November's general election as a write-in candidate.

"Opening up the primaries, letting voters choose who they want to regardless of party affiliation, combined with ranked-choice voting -- it was really two different approaches that allow voters to have more power and have a louder voice," Grenn said. "They like to vote for the person, not the party."

Murkowski, who's running for reelection this fall, congratulated Peltola on Wednesday, noting the history she is making. "While it will be impossible for Alaska to replace Congressman Young, Mary has a long track record of public service to our great state," she said in a statement on Twitter.

All three candidates will get another shot at the House seat in November. Peltola, Palin and Begich were the top three finishers in the primary for the regular election for the next full term. Republican Tara Sweeney, an Alaska Native who is backed by the state's powerful Native corporations, finished fourth. But Sweeney only drew a small share of the primary vote at 4% compared to Peltola's 37%, Palin's 30% and Begich's 26% in that primary.

Sweeney has said she plans to drop out of the race because she doesn't "see a path to victory, nor to raise the resources needed to be successful this November." Questions remain about the official timing of her exit from the race and whether Alaska elections officials will replace her on the ballot.