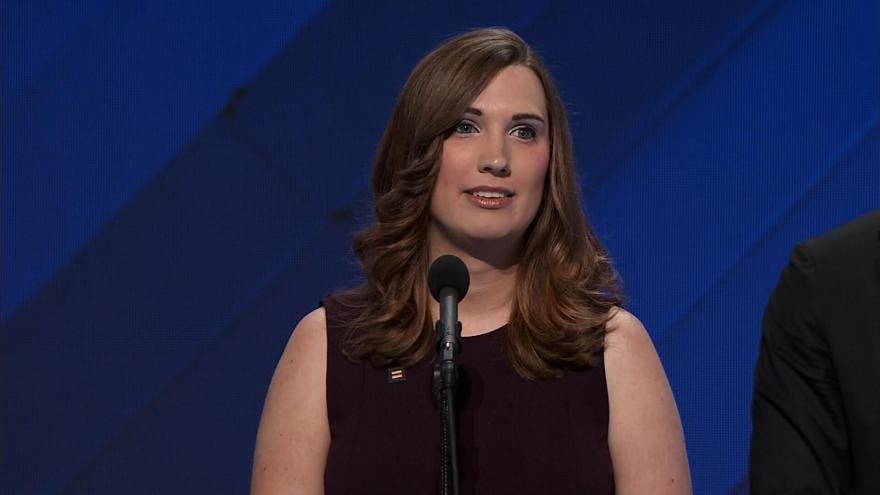 (CNN) -- Transgender activist Sarah McBride on Tuesday won her party's nomination in Delaware for a state Senate seat, CNN projects, putting her on the path to become the first person in the US who publicly identifies as transgender elected to that position.

McBride won over 91% of the vote for the Democratic primary in Delaware's 1st District, according to the Delaware Department of Elections.

"Tonight sends a powerful signal that candidates like me can win," McBride wrote on Twitter Tuesday night. "Everyone deserves to see themselves in government, to follow their dreams, and to be accepted by their community. I will never take for granted the honor of carrying that mantle."

Her Democratic opponent in the primary, Joseph McCole, told CNN he concedes the race to McBride and wishes her well.

McBride, who serves as a Human Rights Campaign's spokesperson, is favored to win in November against Republican candidate Steve Washington in the heavily Democratic district, which includes the city of Wilmington.

The district's incumbent, Democratic state Sen. Harris McDowell, plans to retire at the end of his term in 2020, after serving for nearly four decades in the state legislature.

If elected in November, McBride would also be Delaware's first out LGBTQ person elected to the state legislature.

McBride has already made history, becoming the first transgender person to speak at a major party convention when she addressed the Democratic National Convention in 2016. She was also the first out transgender White House staffer when she interned in the Obama White House.

At age 21, she was student body president at American University, when she came out in 2012 as transgender in a Facebook post and an op-ed in the student newspaper.

In 2013, she advocated for the passage of Delaware's gender identity non-discrimination act, which was signed into law that year.

McBride also worked on the late Beau Biden's campaign for Delaware attorney general, and former Vice President Joe Biden wrote the foreword for her 2018 memoir, "Tomorrow Will Be Different."

"She was honest and heartfelt," Biden wrote, recalling McBride's coming-out essay in 2012. "Even at that young age she was a leader. Not because she thought she was better than anyone else, but because she treated everyone as equals. She was a Biden even then."

The head of a political action committee that aims to elect LGBTQ politicians to office said McBride's victory "will inspire more transgender people to run for elected office."

"At a time when the Trump administration, cynical politicians and too many state legislatures are attempting to use trans people as political weapons, Sarah's win is a powerful reminder that voters are increasingly rejecting the politics of bigotry in favor of candidates who stand for equality," Mayor Annise Parker, the president and CEO of the LGBTQ Victory Fund, said in a statement.

McBride is one of a handful of transgender candidates running for state legislative office this election.