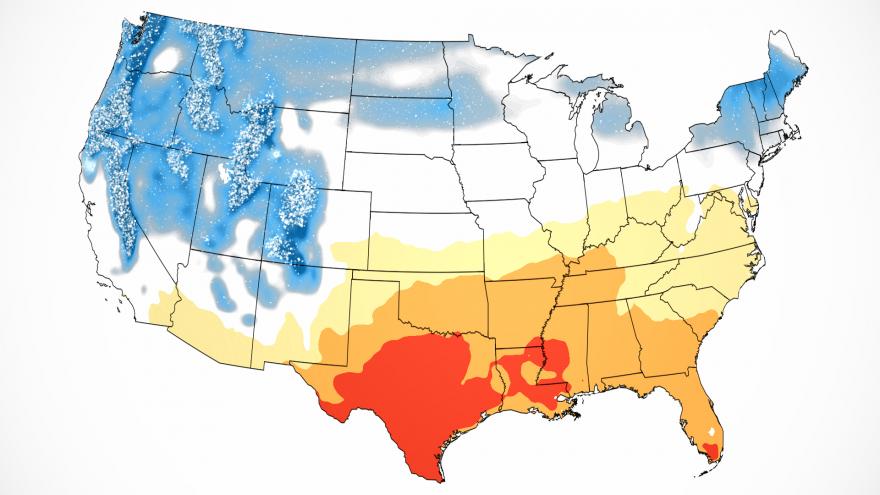 (CNN) -- This holiday weekend is a tale of two Christmases: Heavy snow, rain and wind are forecast for the entire US West Coast, while potentially record-breaking warmth will toast the South.

Out West, a warmer system will bring snowfall Thursday to the highest elevations before a much colder and more significant weekend storm could deliver snow closer to sea level in places like Portland, Oregon, and Seattle, where the climatological odds of such holiday weather arejust 1% to 3%.

"A cold front forecast to move onshore this morning and progress slowly through the Intermountain West over the next couple of days will interact with the moisture ... to produce heavy snowfall over the high elevation terrain from the Cascades to the Rockies," the Weather Prediction Center outlined Thursday.

The rest of the United States over this period looks to be unseasonably warm, with high temperature records set to fall Saturday from Texas into the Southeast. Cities in the South will reach 20 degrees above average for this time of the year, topping out in the 70s and 80s for highs -- and near 90 along the Texan-Mexican border.

In Texas, "while Christmas Eve high temperature records are likely untouchable (88 at [Dallas/Fort Worth International Airport] and 91 at Waco), records on Christmas Day are much more attainable (80 at DFW and 79 at Waco) and appear likely to break this Saturday," the National Weather Service in Dallas said.

Snow and rain expected in the parched West

Arctic air pumping over the next few days into the Pacific Northwest, coupled with substantial moisture provided by an atmospheric river, could deliver snowfall Saturday in the lower elevations.

Check your climatological chance of a white Christmas

The drought-strained West already has benefited from recent atmospheric river events, which deliver to the surface flows of moisture that usually travel thousands of feet in the sky. They tend to be 250 to 375 miles wide and are said to transport an amount of water vapor equivalent to 7.5 to 15 times the average flow of water at the mouth of the Mississippi River.

In the Sierra Nevada mountains, isolated snow could pile high enough this weekend to reach the second story of a building -- up to 10 feet, according to meteorologists at the Sacramento National Weather Service office.

"Over the Sierra Nevada there is potential for 5+ feet of snow to accumulate through Christmas morning, while more moderate totals of around 1 to 4 feet are expected across the rest of the western mountain ranges," the prediction center said.

Snowfall at these levels wouldmake for hazardous road conditions and poor holiday travel across the region.

"Travel across the Sierra will be difficult to impossible at times through the holiday weekend," the Reno weather service office said Wednesday morning.

Parts of the Intermountain West will also measure the snow in feet, delighting ski enthusiasts.

Those at lower elevations will see roughly 1 to 3 inches of rain, some heavy at times, impacting road conditions and potentially causing air travel delays. Flash flooding is also possible, and mudslides are always a risk with this much rain.

"Along the low lying coastal regions this anomalous moisture will translate into heavy rainfall over the next couple days, with some locations, including the terrain adjacent to the Los Angeles and San Diego metro areas, forecast to receive 1 to 3+ inches of rain in 24 hours," the prediction center said Thursday.

"Given the potential for flash flooding as well as runoff over nearby burn scarred and hydrologically sensitive areas, the Weather Prediction Center has issued a Slight Risk of Excessive Rainfall for portions of southwestern California through Saturday morning."

Though it will hinder travel and dampen Christmas plans, the rain and snow are a welcome development, given that more than 97% of West remains in a drought, even after recent atmospheric rivers -- which account for nearly half the West Coast's annual precipitation -- delivered inches of rain and feet of snow.

On a scale of 1 to 5, this week's atmospheric river is forecast to be a high Category 3 in California and even a 5 in portions of Baja California.

Icy roads and fire risk threaten the rest of the US

In the Great Lakes and New England, a pair of systems may slightly impact travel with some typical wintry weather. Icy roads and dangerous driving conditions were reported Thursday in Wisconsin, with vehicle crashes and run-offs along Interstate 94, the state patrol said.

More storm systems are due to bring rain, wintry mix and snow through the weekend to the Midwest.

The drought-riddled Southern Plains could experience dangerous fire weather on Friday due to high winds, dry conditions and warm temperatures.

"Conditions will be favorable for quick wildfire ignition and spread, especially near and west of US 281. For this reason, roasting chestnuts over an open fire is generally not recommended this holiday," said the National Weather Service in Dallas.

Wind alerts are in placeforFriday as gust of 80 mph, which could easily escalate wildfires and make highway travel precarious, are forecast.