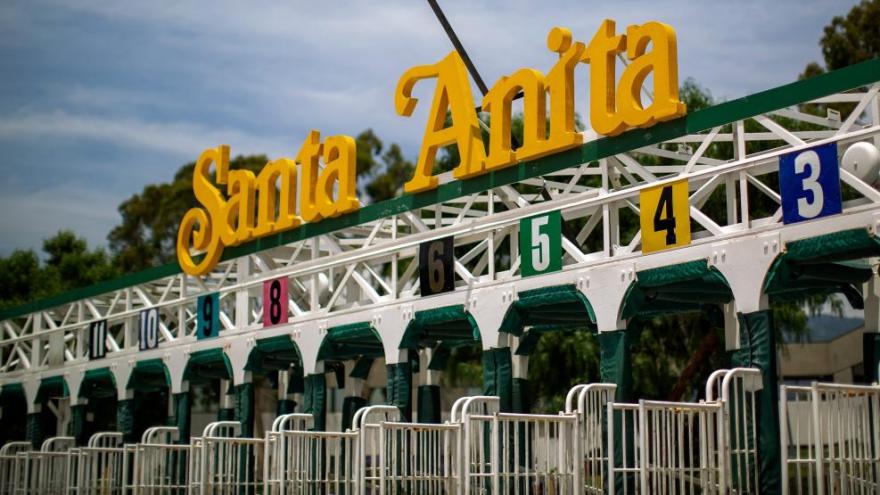 A horse racing at California's Santa Anita Park on Saturday broke his left front ankle and was euthanized by doctors -- the 34th horse death at the famed track since December.

(CNN) -- A horse racing at California's Santa Anita Park on Saturday broke his left front ankle and was euthanized by doctors -- the 34th horse death at the famed track since December.

Satchel Paige, a 3-year-old gelding, was pulled up at the 3/8th pole of the race and transported in an equine ambulance, according to track owners The Stronach Group. Led by Dr. Dana Stead, veterinarians decided to euthanize the horse after determining he had an open fracture of his left front ankle.

The jockey, Ruben Fuentes, was not injured.

Dr. Dionne Benson, Chief Veterinarian for The Stronach Group, said the horse will undergo a necropsy at the University of California Davis School of Veterinary Medicine on behalf of the California Horse Racing Board, as is mandatory for all on-track accidents.

"The accident and the necropsy report will be reviewed to learn what, if anything, could have been done to prevent the accident," Benson said. "Santa Anita will work closely with the California Horse Racing Board to investigate this accident and will continue to brief our stakeholders and all of our constituents, including the public, as more facts come in."

Satchel Paige was racing for his breeder and owner Nick Alexander, The Stronach Group said.

Horse deaths at race tracks are broadly on the decline, but analysis of five years of data from California's three busiest parks show Santa Anita has been the deadliest.

Santa Anita Park closed for evaluation in March after more than 20 horses died in the span of three months.

When it reopened later that month, there were numerous changes: Trainers had to apply two days in advance before working out a horse; jockeys had to replace whips with softer "cushion crops" and restrictions on steroids, anti-inflammation drugs and race-day medications were instituted.

Over the summer, the California Horse Racing Board also began investigating trainers to see if they played any role in the string of horse deaths at the park.

The board had experts examine the remains of the dead horses for clues and worked with the Los Angeles County District Attorney's office, which launched an inquiry into "whether unlawful conduct or conditions affected the welfare and safety of horses."

Thoroughbred racing's year-end championships will happen at the park as scheduled, the event's board of directors said in June.

The 2019 Breeders' Cup World Championships are scheduled for November 1-2 at Santa Anita.

The board unanimously decided to keep the championships in the Southern California park this year after noting "meaningful and effective reforms and best practices have been implemented in recent months at Santa Anita," the event's president said.

"We fully embrace those reforms and will devote our time and energy in the coming months to further advance those efforts," Craig Fravel, Breeders' Cup president and CEO, said. "We look forward to showing the world the best in thoroughbred racing at one of its finest venues."

The event is considered one of the sport's biggest and richest, with about $28 million in prizes doled out across the event's 14 races last year.