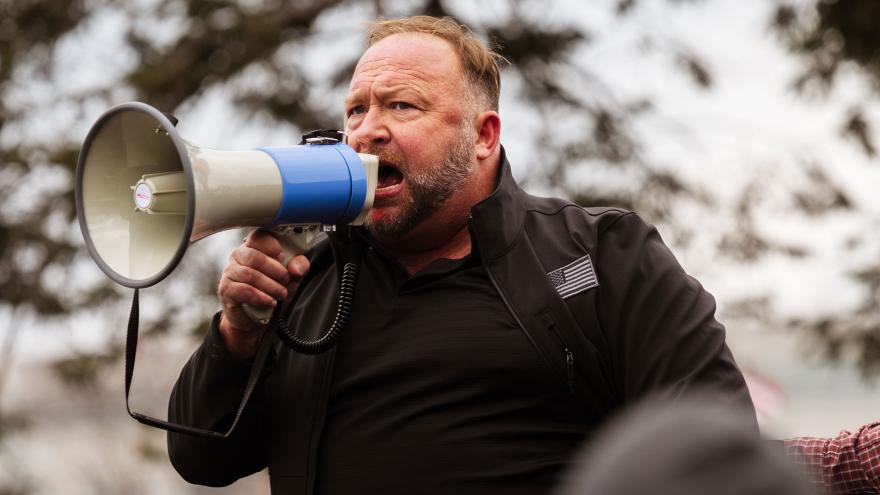 (CNN) -- The lawyer for two Sandy Hook families that have sued right-wing conspiracy theorist Alex Jones asked a jury on Tuesday to award his clients $150 million in damages in a trial that will determine how much money they receive.

"Now that is a huge verdict to be sure, but it is one that will do justice to the level of harm done in this case," Mark Bankston, the attorney for the plaintiffs, said in his opening statement.

"Harm that was done to the parents, grieving parents of murdered children who have had to endure for 10 years, the most despicable and vile campaign of defamation and slander in American history," Bankston added.

Bankston said the $150 million figure amounted to $1 for each person who believes false information about the Sandy Hook shooting pushed by Jones, which he argued is about 75 million. The additional $75 million would be to compensate the parents for the emotional and mental anguish they've endured over the last decade due to harassment from Jones and his followers.

Jones, who is also being sued in Connecticut by the families of other Sandy Hook victims, was found legally responsible in October for false claims he made about the tragedy that claimed 26 lives.

The judge in the case, Travis County District Court Judge Maya Guerra Gamble, issued default judgments against Jones because he refused to comply with court orders.

Jones baselessly said in the aftermath of the Sandy Hook shooting that the incident was staged. Facing lawsuits, Jones has since acknowledged the shooting occurred. He said in a 2019 sworn deposition that a "form of psychosis" caused him to make his false comments.

In his opening statement, Bankston said, "By just one month after the shooting Alex Jones would become patient zero for the Sandy Hook hoax, he had created a sensation."

Bankston also walked the jury through what he said was a decade-long timeline of Jones' efforts to push the Sandy Hook hoax narrative, saying that despite a public plea from one of the parents to Jones asking the radio host to stop spreading false information, Jones "doubled down," targeting the parent in video content and calling him an actor lying about having a child who'd died in the shooting.

In his own opening statement, Andino Reynal, an attorney for Jones, accused the plaintiffs' lawyer of misleading the court.

"What we heard was a conspiracy of lies," Reynal said of Bankston's opening remarks.

Reynal sought to portray Jones as someone who had merely made mistakes when covering the Sandy Hook shooting and suggested the quick nature of the news cycle was in part to blame.

"If you understand the news cycle and how it works, commentators, people on talk shows, they get information, they run with it," Reynal said. "Alex Jones was wrong to believe these people. But he didn't do it out of spite."

Thousands of people were questioning the shooting, not just Jones, Reynal argued, due to what he called "bad coverage" by the mainstream media.

Evidence to be presented during the trial will show Jones didn't cause harassment of the parents, Reynal said. He also questioned whether the parents heard Jones' content about the school shooting.

Reynal said he is "honored" to represent Jones and his company, Free Speech Systems.

During the proceedings on Tuesday, Gamble admonished Jones for speaking to the news media during a recess.

"We're not going to have that happen again," Gamble said.

Gamble said every participant in the trial is "ordered to be silent" about the case when outside the courtroom "or if there is any member of the jury in sight."