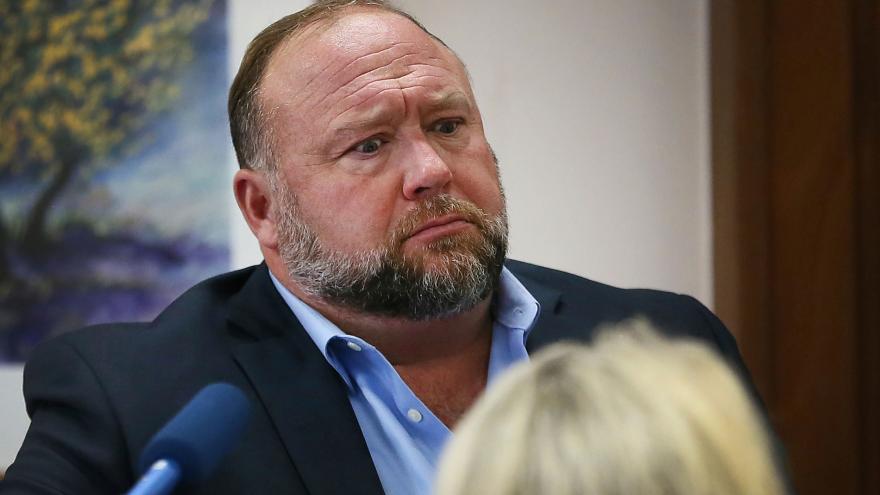 (CNN) -- The dishonesty of right-wing conspiracy theorist Alex Jones was spotlighted in a Texas court on Wednesday as a lawyer for a pair of Sandy Hook parents cross-examined the Infowars founder and fact-checked his answers in real-time.

The jury hearing the case will determine how much Jones will have to pay the parents, Neil Heslin and Scarlett Lewis, who won a default judgement against him earlier this year. An attorney representing Heslin and Lewis has asked the jury to award $150 million in damages.

Jones, who was the sole witness for the defense during the trial, did not fare well Wednesday as he was cross-examined by the plaintiffs' attorney, Mark Bankston.

In a remarkable moment, Bankston disclosed to Jones and the court that he had recently acquired evidence proving Jones had lied when he claimed during the discovery process that he had never texted about the 2012 Sandy Hook shooting.

Bankston said that Jones' attorney had, in an apparent mishap, sent him two years of cell phone records that included every text message Jones had sent.

The cell phone records, Bankston said, showed that Jones had in fact texted about the Sandy Hook shooting.

"That is how I know you lied to me when you said you didn't have text messages about Sandy Hook," Bankston said.

Bankston showed Jones a text message exchange he had about Sandy Hook. But Jones testified that he had "never seen these text messages."

When reminded Jones had testified under oath that he had searched his phone during the discovery phase of the trial and could not locate messages about Sandy Hook, Jones insisted he "did not lie."

In another moment, Jones was asked whether he had connected Maya Guerra Gamble, the judge overseeing the trial, to pedophilia and human trafficking.

When Jones denied having done so, Bankston played video for the court of an Infowars video which did just that.

In the video, Jones attacked Gamble's prior work for Child Protective Services by claiming the agency had been "exposed" for "working for pedophiles."

Gamble, whose office did not respond to an earlier request for comment about the fact Infowars has been attacking her in such terms, laughed when she saw a screengrab from the video in court on Wednesday.

"The person on the left of this image is our judge, correct?" Bankston asked Jones.

Jones replied that it was.

Attorneys for the plaintiffs said Tuesday that they intend to ask for sanctions against Jones for being dishonest on the stand. And Gamble on Tuesday had also admonished Jones for having violated his oath to tell the truth twice.

"You are already under oath to tell the truth," Gamble said Tuesday. "You've already violated that oath twice today, in just those two examples. It seems absurd to instruct you again that you must tell the truth while you testify. Yet here I am again."

"This is not your show," Gamble added to him Wednesday.

After Jones finished testifying Wednesday, the defense rested its case and closing arguments got underway.

The jury could potentially decide how much it will award in damages to the Sandy Hook parents as early as this week.

The current trial is the first of three that will determine how much Jones will have to pay multiple Sandy Hook families who sued him and won default judgments.