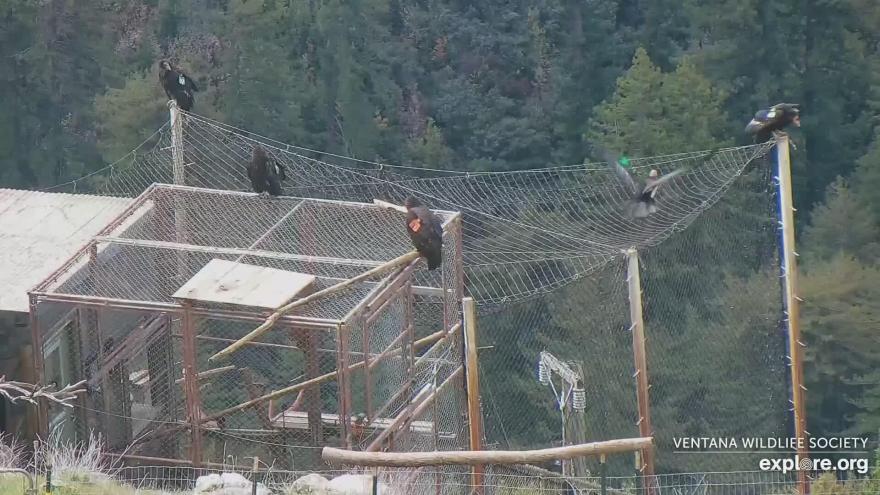 The condor sanctuary before it was destroyed in the Dolan Fire.

(CNN) -- A sanctuary for the endangered California condor in Big Sur was destroyed by a California fire, according to Ventana Wildlife Society.

While no people or condors were at the facility when it burned, at least four condors are missing, Kelly Sorenson, executive director of Ventana Wildlife Society, told CNN.

"We have eight chicks in nests and at least four of these are in the path of the fire," Sorenson said.

"In central California, over the last two decades, there have been 41 nestings, each with one chick, and six of these birds experienced wildfire. Five of the six survived, so it's hopeful for the birds currently experiencing the Dolan Fire. We have not been able to check on those chicks yet, and as for the free-flying flock, most are accounted for though at least four remain missing."

Among the missing condors is Iniko, whose name means "born during troubled times." The baby condor hatched on April 25, according to the condor sanctuary.

The news comes as fires continue to ravage the Golden State. In the last 11 days, 1.32 million acres have burned up and down the state, after 400 lightning strikes hit northern California.

More than 15,000 firefighters are currently battling over two dozen major fires and lightning complexes across California, according to Cal Fire officials.

Two live cameras recorded the fire's devastation on the sanctuary. The nest cam, where Iniko is being raised by wild parents Redwood Queen and Kingpin, was lost on the evening of August 20, and the Sanctuary Cam, with an overview of the release area, was burned on August 21, Ventana Wildlife Society wrote in a Facebook post.

The decline of condors, which Ventana Wildlife Society said is North America's largest flying land bird, "has been attributed to shooting, poisoning, electric power lines, egg collecting, and habitat loss," according to the non-profit's website.

"In 1987, the last wild California Condor was taken into captivity to join the 26 remaining condors in an attempt to bolster the population through a captive breeding program."

After the captive breeding program was successful, condors began being released back into the wild, Ventana Wildlife Society said. It has been releasing captive-bred condors at its Big Sur sanctuary since 1997.

Sorenson said the organization is "already making plans to rebuild so we can continue to recover condors to the wild."

"As condors and their chicks have survived wildfire in the past, there is still hope for Iniko and the others," Ventana Wildlife Society wrote on its Facebook page, where it is seeking donations to help its efforts to rebuild. "Once it is clear, we will rebuild as nothing will get in our way of restoring this magnificent species back to nature!"