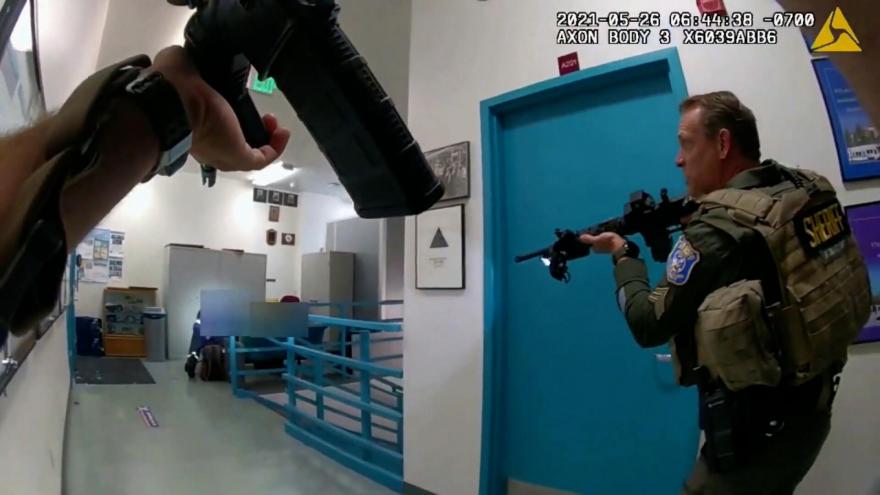 "Hey! ... I've got somebody down in front of me," a law enforcement officer says in the video, peering through a door pane into the next room shortly after hearing the final shots May 26 at a Santa Clara Valley Transportation Authority building in San Jose.

The Santa Clara County Sheriff's Office on Tuesday released the video, which shows deputies and police officers hunting for Samuel James Cassidy, who authorities say killed nine of his VTA co-workers in two buildings at a light rail yard before killing himself.

The video shows deputies and officers -- while searching a room -- hearing three shots in roughly 11 seconds, and, seconds afterward, barging past double doors to find what authorities said is Cassidy's body slumped in a chair with a gun in hand.

"Yeah, he's in here," an officer says as they approach the body, guns drawn.

"Oh, the gun. I see the gun in his hand, right there," another says.

Sheriff Laurie Smith said she believes the first of the three shots shattered a window leading to a separate room -- it's not clear what else that shot hit.

"The next two shots -- he shot himself once under the chin. It wasn't fatal, and then (he fired) in the side of the head," Smith said at a news conference Tuesday.

The officers encounter Cassidy's body at roughly 6:44 a.m., according to the time recorded on the video -- roughly 10 minutes after police say 911 calls came in about the killings.

Smith has said she believes the speed of the officers' response prevented Cassidy from killing more people.

Cassidy's manner of death was suicide, and the cause of death was multiple gunshot wounds to the head, the coroner's office said in a prepared statement Tuesday.

"Although rare, this can occur in suicides in which the first shot to the head was not immediately fatal," the statement of the coroner's office reads.

The shooting happened around the time of a shift change at a light rail yard where vehicles of VTA -- a public transit operation that runs bus and light rail service -- are maintained and dispatched.

Police haven't released a definitive motive in the shooting. But Smith has said Cassidy, 57, was "highly disgruntled."

"Based on recent developments in the investigation we can say that the suspect has been a highly disgruntled VTA employee for many years, which may have contributed to why he targeted VTA employees," the sheriff's office said in a news release last week.

They ascend an exterior staircase to the third story. There, someone -- apparently a worker -- exits an exterior door.

Officers have that person walk backward toward them with his hands on his head. Then they ask him for -- and receive -- a key card so they'll have access to the building.

The officers go through that door and enter a narrow room with lockers and a refrigerator. They then enter a much larger, dark room with desks.

As they search that room, they hear one gunshot. An officer cusses as another reports the shots on a radio.

Ten seconds later, another shot; and a third shot follows roughly a second after that.

Officers hustle toward the sound, stopping at a set of double doors. Through glass panes, the officers see Cassidy's body.

Gunman appeared to target those he shot, sheriff's office says

The gunman appeared to specifically target his victims when he fired 39 rounds, Sheriff Smith said Thursday. She cited information that investigators had about the gunman telling at least one person -- someone who was there but was not an employee -- that he wouldn't shoot that person.

Authorities said Cassidy coordinated a fire at his San Jose home with the attack. They said they believe he ignited a fire inside his home by placing ammunition inside a pot on the stove, surrounding it with accelerants and then turning on the stove.

A fire was reported at the home within minutes of the first calls of the shooting at the VTA facility, located about 8 miles away.

Cassidy had been stopped in 2016 by US Customs officers and found to have books on terrorism and a memo book full of hateful writings about his workplace, a Department of Homeland Security official told CNN on Thursday.

San Jose officials said Friday that police had not been informed about this.

The Department of Homeland Security official told CNN that Cassidy was taken into secondary inspection after returning from a trip to the Philippines on August 8, 2016.

US Customs and Border Protection officers searched his belongings. Besides a black memo book filled with notes about hatred towards the VTA, officers also found books about terrorism, the official said.

Customs officials detained Cassidy in 2016 at least in part because of red flags regarding sex tourism in that part of the world, the official said, adding that there is no indication that anything related to sex tourism was found.