San Jose gunman had 22,000 rounds of ammunition at his house, which sheriff's office thinks he set on fire 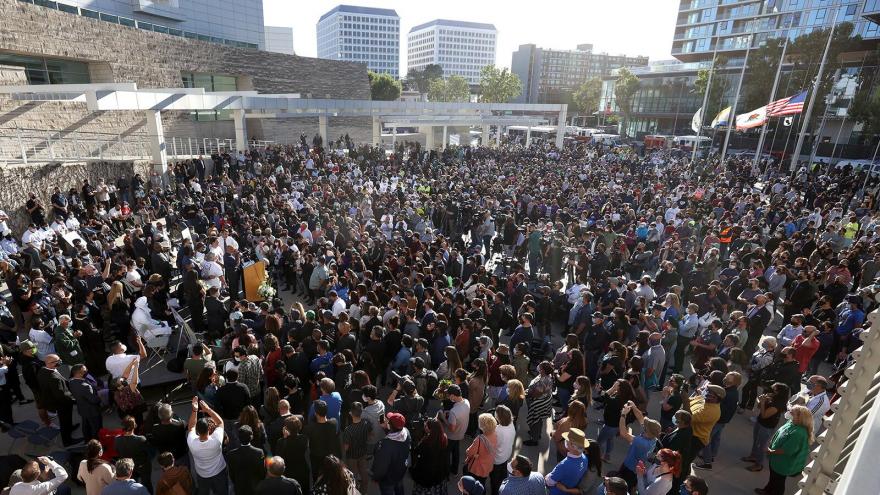 Mourners fill the plaza at San Jose City Hall during a vigil for the nine shooting victims.

(CNN) -- More than 22,000 rounds of ammunition, a dozen firearms, suspected Molotov cocktails and multiple cans of gasoline were found in the home of Sam Cassidy, the gunman who took nine lives at his workplace on Wednesday, according to the Santa Clara County Sheriff's Office.

The motive for Cassidy's rampage has not been determined, but authorities have said he appeared to have long been a disgruntled employee at the Valley Transportation Authority (VTA) light rail yard in San Jose where he shot and killed nine people Wednesday morning while reportedly letting others escape.

"Based upon current evidence obtained by Sheriff's Office Detectives at the VTA yard and the suspect's resident, it is clear that this was a planned event and the suspect was prepared to use his firearms to take as many lives as he possibly could had Sheriff's Deputies not made entry to stop his rampage," the sheriff's office said in a news release.

Santa Clara County Sheriff Laurie Smith said Cassidy apparently shot himself as deputies closed in on him. Authorities have said he had three guns with him.

Authorities said Cassidy coordinated a fire at his home with the workplace attack. They believe he ignited a fire inside his home by placing ammunition inside a pot on the stove, surrounding it with accelerants and then turning on the stove, according to Deputy Cian Jackson of the sheriff's office.

A fire was reported at the home Wednesday morning within minutes of the first calls of a shooting at the VTA facility, located about 8 miles away.

Cassidy's home, which sustained heavy damage in the fire, has been rendered safe and no longer poses a threat to nearby residents, San Jose Fire Department spokesperson Erica Ray said Friday afternoon.

San Jose officials said Friday police were not informed that Cassidy had been stopped in 2016 by US Customs officers and found to have books on terrorism and a memo book full of hateful writings about his workplace.

A Department of Homeland Security official told CNN on Thursday that Cassidy, 57, was taken into secondary inspection after returning from a trip to the Philippines on August 8, 2016.

"Whatever this detention at the border was, it did not result in an arrest that showed up on his FBI criminal history, and it was not reported to SJPD," San Jose Mayor Sam Liccardo's office said in a statement to CNN.

Customs officials detained Cassidy in 2016 at least in part because of red flags regarding sex tourism in that part of the world, the official said, adding that there is no indication that anything related to sex tourism was found.

US Customs and Border Protection officers searched his belongings. Besides a black memo book filled with notes about hatred towards the VTA, officers also found books about terrorism and fear and manifestos, the official said.

The Department of Homeland Security declined to comment on the matter.

Mourners gather to show community is not broken

Nine navy blue uniform caps sat above nine photos of the VTA employees killed Wednesday morning as loved ones and community members gathered at the City Hall on Thursday to remember the latest victims of a mass shooting.

San Jose's loss was the 232nd shooting where at least four people were injured this year, according to a tally by the Gun Violence Archive.

And it felt personal for the VTA employees, who said there was a particular sense of closeness in their community.

Kenneth Darden, a VTA operator of about 20 years, said the employees knew each other well. He said he felt numb as he wondered: How do we keep this from happening again?

"I don't think we've actually been able to come together as a nation and understand the significance of gun violence and how it has impacted so many families across the nation for so many years," Darden said. "It's a difficult task to come up with, but this is the United States of America. We should be able to come together and figure this problem out."

Karman Singh arrived at the City Hall with a bouquet of flowers to mourn his older brother, Taptejdeep Singh. But he said he was also there in honor of the other victims as well.

"He thought of them as family, and his family is my family," Singh said, adding that he wanted to "show people so much strength that nobody ever dares to try to break anybody, to walk into a place with dozens of people and take out people one by one."

Some at Thursday's vigil carried signs calling for the end of gun violence.

"All nations have people with mental illness but only the USA has mass shootings! The reason? GUNS+NRA," Brian Haberly's sign read.

The gunman was armed with three semi-automatic handguns and 32 high-capacity magazines, according to the sheriff's office said.

The weapons he used in the killing spree were legally obtained and registered, FBI Special Agent in Charge Craig Fair of the bureau's San Francisco field office told CNN on Thursday.

Fair said he thinks all the handguns were used during the attack and noted that one of the weapons jammed.

According to preliminary information, the gunman appeared to target his victims when he fired 39 rounds, Sheriff Smith told CNN on Thursday.

During his rampage, the shooter told a local union official who was present but did not work for the VTA, "I'm not going to shoot you," the sheriff told CNN.

A witness told CNN affiliate KGO that he also believed the gunman bypassed certain people and appeared to select those he shot.

"He ... was targeting certain people. He walked by other people," VTA worker Kirk Bertolet told KGO on Wednesday night. "He let other people live as he gunned down other people."

The gunman "took his own life in front of the deputies," Smith told CNN. She said she believes the quick response from deputies saved many lives.

He was a disgruntled employee, sheriff says

Federal investigators have not found any manifesto or writings that would indicate a motive, Fair said, but noted local law enforcement was exploring the suspect's social media presence for clues.

But Smith said the gunman was "highly disgruntled."

"Based on recent developments in the investigation we can say that the suspect has been a highly disgruntled VTA employee for many years, which may have contributed to why he targeted VTA employees," the sheriff's office said in a news release Thursday.

Detectives are continuing to conduct interviews and are reviewing video and cell phone evidence in hopes of determining a motive for the shooting, the sheriff's office said.

Nelms was married to Cassidy for about 10 years until the couple filed for divorce in 2005. She had not been in touch with her ex-husband for about 13 years, according to the outlet.

911 calls come in an hour after gunman is seen arriving

About an hour later, there were emergency calls about the shooting as employees from the midnight shift and the day shift overlapped, Santa Clara County Sheriff's Deputy Russell Davis said.

Minutes after authorities were called about the shooting, firefighters were called to a fire at the suspect's home, Sheriff Smith told CNN. It's not immediately clear how that fire started.

Fair, the FBI special agent in charge, told CNN that investigators recovered intact Molotov cocktails, made with paint thinners and alcohol, and multiple weapons at Cassidy's residence. No explosive materials were found in his locker.