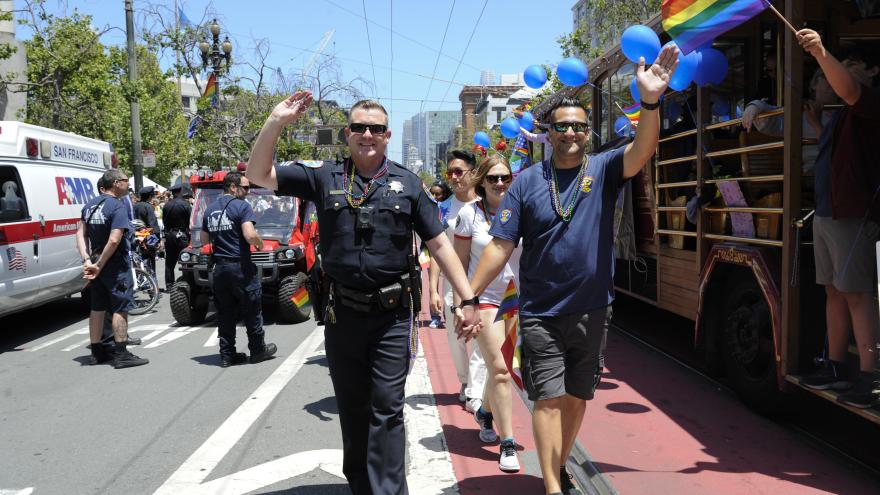 (CNN) -- Some uniformed police officers will now be able to march in San Francisco's Pride Parade, according to a statement from parade organizers and the San Francisco Police Officers Pride Alliance, amending a previous decision that banned officers from wearing uniforms but allowed other types of police-affiliated apparel.

"Pride grew out of conflicts between LGBTQ communities and police at Compton's Cafeteria and Stonewall Inn," the groups said in a joint statement. "Ever since then, we have attempted to bridge that divide. That is why we are grateful to have reached a compromise solution today. It shows everyone is working in the spirit of Pride to come together!"

All first responders will march in one contingent, with command staff wearing their mandated uniforms and a small number of LGBTQ officers in uniform providing security for the contingent, according to the statement. All of these officers will be on-duty, a spokesperson for the organizations said.

All other off-duty officers in the contingent will wear casual Pride apparel representing the police department as previously allowed by parade planners.

"I appreciate how our LGBTQ police officers and public safety workers came together with the Pride Board to come up with a compromise," Mayor London Breed said in a statement.

"The understanding and respect they showed each other is reflective of this year's pride theme: love brings us together. Pride Month brings people from around the world to celebrate in San Francisco and I am proud of everyone involved who listened to each other this past week and focused on what unites us."

Last month, Breed said that if the decision had not been reversed, she would not attend in a show of support for members of the LGBTQ community serving in uniform.

Scott said in a statement that he is pleased the officers will be allowed to march in uniform and that they are committed to "continuing the very important conversations that have taken place over the last 18 months."

After two years without a parade due to the Covid-19 pandemic, the 52nd annual San Francisco Pride weekend is set for June 25 and 26, according to its website.