San Francisco officer is charged with on-duty homicide. The DA says it's a first 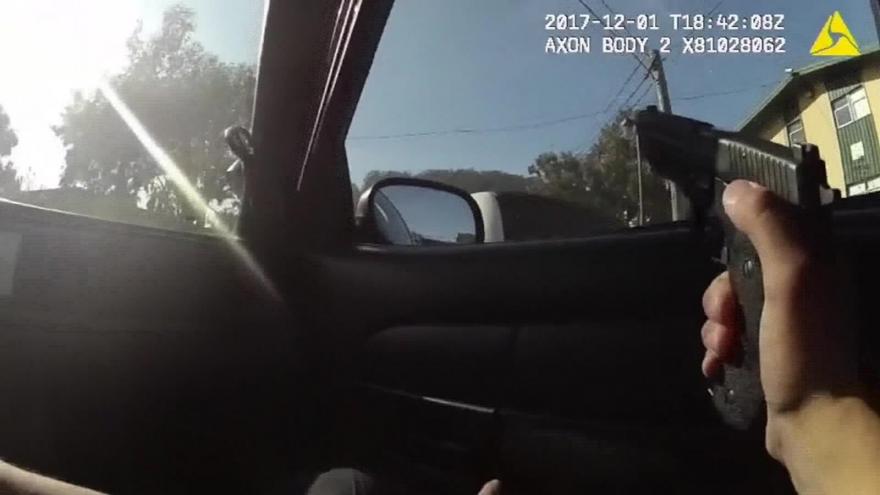 Body camera footage of the shooting was released by the police department.

(CNN) -- A former San Francisco Police officer was charged with homicide Monday in connection with a 2017 on-duty shooting. The city's district attorney's office said in a news release that it believes this is the first time a city law enforcement officer has been charged with an on-duty homicide.

CNN has reached out to an attorney for Samayoa but has not yet heard back.

The charges come amid a nationwide conversation on race and police brutality following the death of George Floyd in Minneapolis earlier this year, and police reform advocates and local officials have lauded the DA's office for the move.

Shot through the passenger side window of the patrol car

The District Attorney's Office said that on December 1, 2017, Samayoa and another officer followed the van O'Neil was in for a few blocks before it reached a dead-end street, where the news release says O'Neil jumped out of the vehicle and began to run on foot. Samayoa, who was sitting in the passenger seat, is charged with fatally shooting O'Neil through the passenger side window of the patrol vehicle, according to the release.

Samayoa was fired in March 2018 as a result of the incident.

A judge signed a warrant for Samayoa's arrest with a $1,000 bail. The former officer is expected to surrender on the warrant later this week, according to the DA's office.

"For too long, we have seen the failures of our legal system to hold police accountable for the violence committed against the members of the public they are entrusted to keep safe," District Attorney Chesa Boudin said in a statement. "In my administration, police officers are not above the law.

"Police officers are obligated to follow the law when using force -- even when responding to serious crimes. As District Attorney, I will continue to hold accountable officers who inflict unlawful violence and breach the trust the public places in them."

The San Francisco Police Officers Association (SFPOA) said they are supporting the former officer and his family after learning of the charges.

"The criminal justice system will allow for the facts surrounding this case to be disclosed," SFPOA President Tony Montoya said in a statement. "We are committed to ensuring that Christopher and his family are supported during this difficult time and that he is accorded his due process rights and provided with a vigorous defense against these charges."

District Attorney Boudin's decision to prosecute this case has been met with praise from O'Neil's family as well as police reform advocates and local officials.

"I am happy to hear this news, and hoping it brings some justice to our family," Green told KGO.

An attorney for O'Neil's family, John Burris, told the affiliate the family is relieved by the news.

"I was quite pleased to see it," Burris told KGO. "I was a little surprised that it wasn't murder, but I understand the DA thinks manslaughter is a charge that is easier to prove than murder."

San Francisco Supervisor Shamann Walton, whose district includes the area where the deadly shooting occurred, expressed satisfaction with the charges.

"Bayview residents deserve to know that law enforcement officers who inflict violence and harm in our community will be held accountable," Walton said in a statement. "This prosecution is an important, historic step towards showing that Black lives matter and that unlawful police violence will not be tolerated."

Angela Chan, a civil rights attorney and former San Francisco Police Department commissioner, said in a statement that the charges are an important part of dismantling the "problematic culture of SFPD that allows officer involved shootings to occur without serious and objective investigations."

"For many years, the highest ranks of SFPD have rewarded officer involved shootings by awarding medals of valor when an officer shoots and kills a community member, particularly Black, Latino, and Asian American community members, and even when an internal affairs investigation is pending," Chan explained.