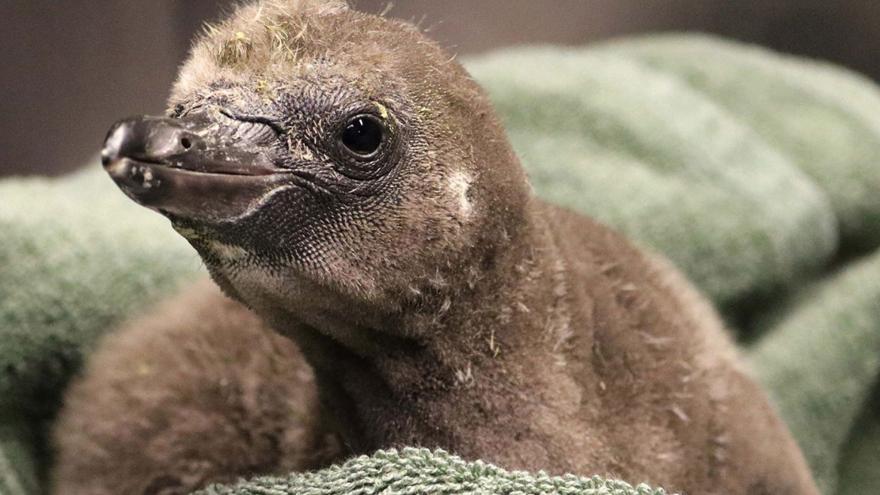 (CNN) -- A penguin couple received an extra special New Year's gift at a zoo in New York, where they became the organization's first same-sex foster parents to successfully hatch an egg.

The chick was hatched on January 1 by Elmer and Lima, two adult male Humboldt penguins, at the Rosamond Gifford Zoo in Syracuse, New York, the zoo announced in a press release.

Elmer and Lima were both born at the zoo themselves -- Elmer in 2016 and Lima in 2019 -- and they became a couple in fall 2021 during the current breeding season.

"The penguins are free to choose who they want to spend time with (pair with) and in their case, they chose each other," zoo director Ted Fox told CNN in an email, adding: "The welfare and wellbeing of every animal that lives at the zoo is very important to us and we support and encourage each animal to make its own choices when choosing their mates."

The zoo said Elmer was given his name "because the egg he hatched from was accidentally damaged by his parents and the animal care team repaired it using Elmer's glue."

To avoid this kind of unintentional damage, the zoo said it sometimes transfers an egg from its biological parents to foster parents, who then care for it while the other couple incubate a dummy egg.

The egg Elmer and Lima hatched was initially laid by heterosexual pair Poquita and Vente, but after the zoo team detected a viable embryo inside, they transferred it to the first-time dads.

"At our first health check when the chick was five days old, it weighed 226 grams (8 ounces)," Fox said in a press release. "It continues to be brooded and cared for by both Elmer and Lima, who are doing a great job."

Fox told CNN the chick, which hasn't yet been named, is a male.

Penguin couples divide parenting duties -- incubating the egg, brooding and feeding the chick -- equally, he said, explaining: "While one parent is out feeding or swimming the other stays with the chick to keep it warm and protect it. Usually the roles switch every few hours although at night both parents stay close to the nest/chick."

Fox said in the press statement that not all parents were good at hatching eggs, with some breaking the egg, not incubating it correctly, or fighting over who incubates it at what time.

"That's how we evaluate who will be good foster parents -- and Elmer and Lima were exemplary in every aspect of egg care," he added, saying the couple's story would "help people of all ages and backgrounds relate to animals."

At least two penguin pairs have broken their eggs in the past, and the fact that Elmer and Lima "built a nest and defended their territory" was a sign that they could be good parents, the zoo's press release added.

But the most famous couple remain male chinstrap penguins Silo and Roy, who found love at the Central Park Zoo in 1998 and hatched and raised a chick named Tango. Although their love didn't last -- Silo left Roy for his new flame Scrappy in 2005 -- their family did inspire an award-winning children's book.

Elmer and Lima are Humboldt penguins, which are classified as vulnerable by the International Union for the Conservation of Nature (IUCN). The organization says decreasing numbers in Peru "indicate that there is probably an ongoing, underlying rapid decline in numbers."

Rosamond Gifford Zoo has 28 Humboldt penguins in its current colony, having begun with 18 -- and has hatched a total of 55 chicks, many of which have been transferred elsewhere.