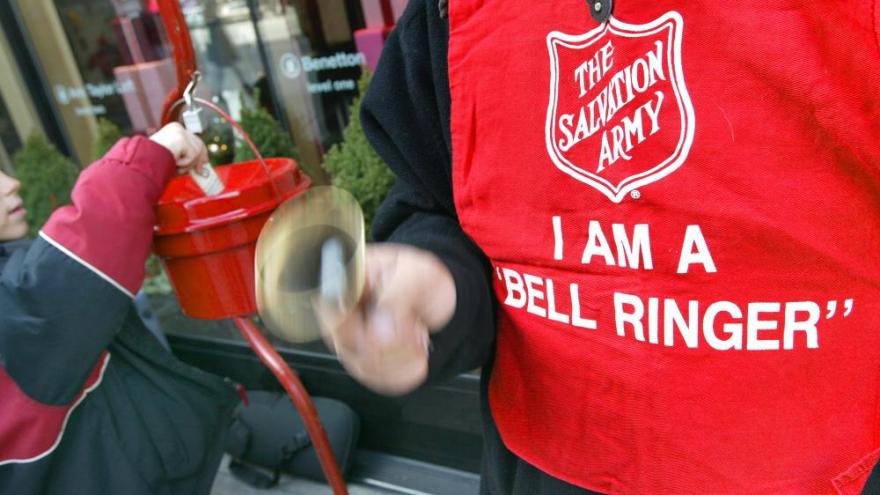 A Salvation Army bell ringer in action outside a Chicago store in 2003.

(CNN) -- The Salvation Army is getting an early start on its holiday fundraising campaign due to the unprecedented demands of the coronavirus pandemic.

"It would be no exaggeration to say that since the pandemic began in mid-March, the Salvation Army has seen a tsunami of human need," said Kenneth Hodder, Salvation Army's National Commander.

Since March, Salvation Army USA has provided more than 100 million meals, 1.5 million nights of safe shelter, plus emotional and spiritual support to over 800,000 people across the US. They expect those numbers to grow, bracing for a 155% increase in the need for their services heading into the holiday season. Those services include putting food on the table, paying bills, providing shelter, and even helping place gifts under the tree.

The new campaign is called "Rescue Christmas," and it kicked off on September 14 -- 100 days before Christmas.

"Our traditional red kettle campaign, a symbol of Christmas and Americans caring for one another, is going to be increasingly difficult this year," Hodder told CNN.

"We believe that Christmas for millions of Americans is at risk," the commander said. "The need that we see at Christmas will last far beyond the holidays."

Last year, the Salvation Army raised $126 million with its Red Kettle campaign; they expect to only bring in half that much this year.

"That would be disastrous for our ability to meet the needs of people," Hodder said. "So, for us, the Christmas Kettle Campaign not only is a symbol, but it is a means of acquiring the vital resources that we need."

Although this year's campaign got an early start, you won't be seeing as many kettles this season as you have in Christmas past.

"Most people are carrying less cash than they have in the past. We have less foot traffic at some stores, and as unemployment has risen, so many people who have given to the army in the past are in fact, coming to us for help."

In response, the organization shifted focus to online donations and launched the "Rescue Christmas" donation page.

"People can go to that website today, and they can provide a one-time donation, find volunteer opportunities and also enlist in the army and make a $25 monthly sustaining gift," added Hodden.

Local donations will continue to stay in the communities from which those funds are given. The Salvation Army assures that .82 cents of each dollar donated goes directly to helping those in need.

"We want to make sure everyone who comes to the Salvation Army will get what they need, not only for Christmas but to know that there's hope and that there's a bright future ahead."

You can donate online here.