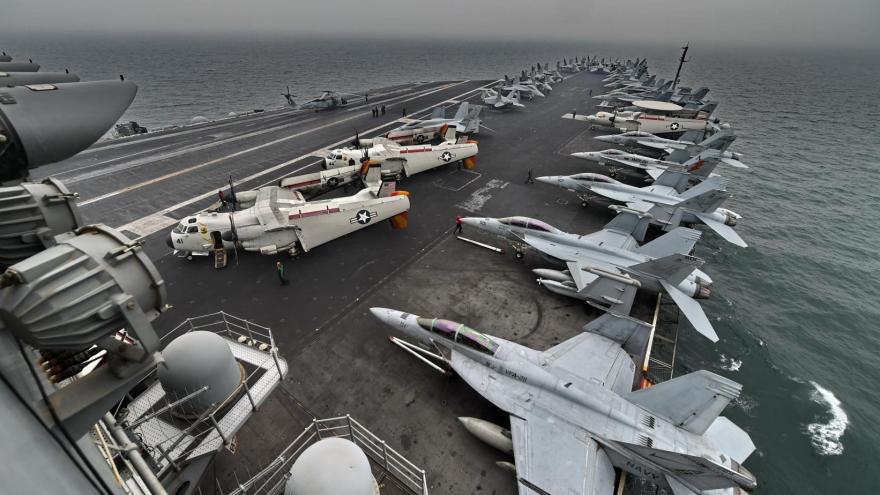 Military leaders warn the coronavirus crisis could last well into the summer as the President seeks to open the economy back up.

(CNN) -- The Pentagon's senior leadership broadcast a different message than President Donald Trump on Tuesday, with military leaders warning the coronavirus crisis could last well into the summer as the President seeks to open the economy back up.

The severity of the challenge was underlined with the news that three US sailors tested positive for the virus while at sea.

"You're looking at somewhere around 90 days based on some of the other countries. That may or may not apply to the United States," said Gen. Mark Milley the Chairman of the Joint Chiefs of Staff, when asked how long the crisis could last during an online town hall. Milley and Defense Secretary Mark Esper took questions from service members during the town hall.

"If it does apply, you're looking at probably late May, June, something in that range. Maybe could be as late as July."

Milley was clear that "no one actually knows" when the crisis would be over, but that they were looking at "a variety of models."

On the same day that the President said at a Fox News town hall that he wants the country "opened up and just raring to go by Easter," Esper made it clear the Pentagon was preparing for a longer period of social distancing.

"I think we need to plan for this to be a few months long at least, and we're taking all precautionary measures to do that," he said.

He further warned that the Defense Department, despite stockpiling medical supplies, would likely face shortages of personal protective equipment, such as masks and gloves, as the civilian health care system is currently dealing with, "until the private sector industry can pick up the slack."

Later on Tuesday the Pentagon announced that three sailors aboard the aircraft carrier USS Theodore Roosevelt have tested positive for the virus and have been flown to a military medical facility for treatment.

"We've identified all those folks that they've had contact with and we are quantifying they as well," he added.

They are the first reported cases of the virus aboard a US Navy ship while it was at sea.

The carrier was last in port 15 days ago as part of a visit to Vietnam. However, Navy officials would not say if the sailors were exposed to the coronavirus while there, noting that multiple aircraft had flown to the carrier in the intervening period.

There are approximately 5,000 personnel on board the carrier.

Esper had previously announced on Monday that the Pentagon is looking at sending military field hospitals to New York and Washington state, in addition to the Army Corps of Engineers' undertaking to retrofit buildings in New York like hotels, dormitories and convention centers into temporary hospitals, in order to add an additional 10,000 hospital beds to the state's capacity.

However, he warned that although multiple states have requested assistance from the Defense Department, they "can't meet everyone's needs."

"Right now I anticipate sending a hospital to Seattle and a hospital to New York City and beyond that once that's confirmed we will look at sending to other places, and as necessary we will continue to alert units to prepare to deploy and deploy them as appropriate," Esper said on Monday.

The Pentagon has already ordered the deployment of the Navy hospital ship USNS Mercy to Los Angeles to help alleviate the some of the burden on civilian hospitals, while the USNS Comfort is expected to deploy to New York in the coming weeks, after it is finished undergoing maintenance.

And as countries all over the world grapple with the pandemic, Milley warned today that the crisis could lead to "social breakdowns" or "political chaos in certain countries" as health care systems are overwhelmed. However, he assessed that the virus would likely have a "moderate to low" impact on US military readiness.

"It's very, very important, again, that we do what the professionals are telling us to do, which is flatten that curve, take all the appropriate measures for US in the military," said Milley, "but also in the nation to do our part, so to speak, in order to reduce the probability and to mitigate the impact of this coronavirus globally."