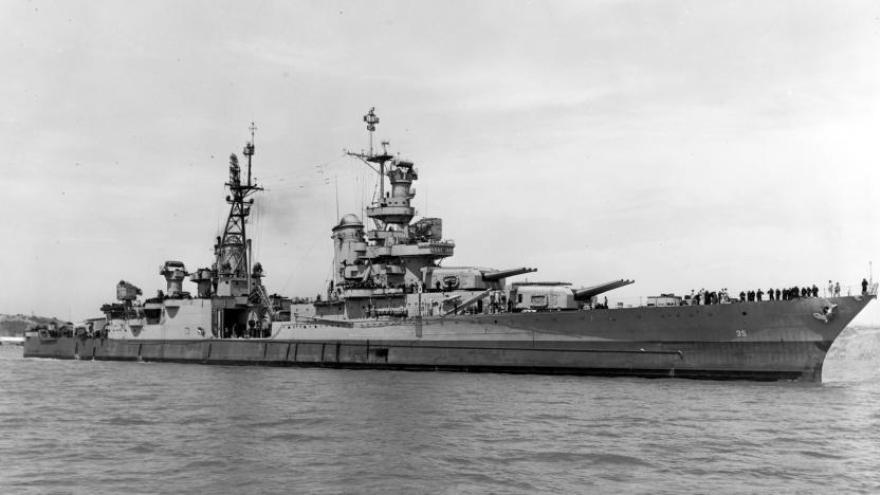 In this July 10, 1945, photo provided by US Navy, the USS Indianapolis is shown off the Mare Island Navy Yard, in Vallejo, California.

(CNN) -- For most of his life, Edward Salinas never knew he had a great uncle who served in World War II. The 26-year-old grew up in Edinburg, Texas, just north of the border with Mexico, thousands of miles away from where his relative was a crew member on one of the Navy's most famous sunken ships.

Salinas took a DNA test so he could start building a family tree for his young children. Soon after, he found out about his great uncle, Seamen 3rd Class Jose Antonio Saenz.

"I had been digging around and trying to put pieces of the puzzle together for my family," Salinas told CNN from his home. "I never know about this. It's almost like he was forgotten."

In a sense, Saenz was forgotten, listed as "unaccounted for" from the USS Indianapolis, one of the most infamous stories in US Navy history.

In July 1945, the USS Indianapolis was on its way back from a secret mission delivering parts for the atomic bomb to the tiny island of Tinian in the western Pacific Ocean. Shortly after midnight on July 30, a Japanese submarine struck the heavy cruiser with torpedoes, sinking the ship in minutes. Of the 1,195 sailors on board, an estimated 300 died on board the ship.

The rest of the crew drifted in the open ocean for four days, suffering from injuries, dehydration and shark attacks, until a patrol spotted survivors. The ship had not been reported missing, and the Navy did not launch an immediate rescue attempt. Only 316 crew members survived the ordeal.

The wreck was discovered in 2017 at a depth of 18,000 feet, more than three miles below the surface of the water. But that only closed part of the story.

Some of the sailors whose bodies were recovered from the ocean were buried at sea. But for 77 years, the Navy officially listed them as "unaccounted for" because of administrative errors, according to the Navy Casualty Office. That includes Jose Antonio Saenz.

Following a joint effort between the Naval History and Heritage Command, the Navy Casualty Office, the USS Indianapolis Survivors Association and others, the Navy has changed the status of 13 sailors to "Buried at Sea."

Salinas, reflecting on the change after so many years, called it a measure of "respect" for his family.

"You just feel like some sort of honor back to the family," he said, noting that it would add more "color" to his family's history.

Capt. Robert McMahon, the director of the Navy Casualty Office, called it a "solemn duty and obligation" to bring closure to the families of those lost at sea.

"No amount of time lessens the loss," he said, according to a press release from the Navy. "If we can bring some certainty to loved ones, even seven decades later, we are keeping faith with those we lost."