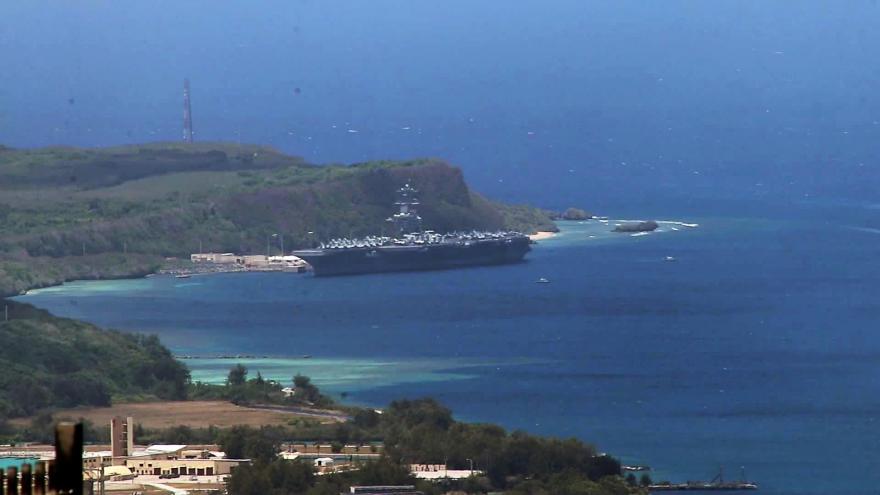 USS Theodore Roosevelt aircraft carrier sits on the outskirts of Apra Harbor, Guam, on April 1. At least 70 sailors have tested positive for coronavirus aboard the aircraft carrier.

(CNN) -- A sailor who tested positive for Covid-19 on the USS Theodore Roosevelt has died of coronavirus, the US Navy said Monday.

The Navy said that the sailors who found him unresponsive attempted to administer CPR prior to his being transferred to the intensive care unit.

In addition, a US defense official told CNN that four sailors from the ship have been transferred to hospital.

"Over the weekend, four additional Theodore Roosevelt Sailors were admitted to the hospital for monitoring. All are in stable condition, none are in ICU or on ventilators," the official said.

On Tuesday, one of those sailors was moved to the intensive care unit at the US Navy hospital in Guam, a US Navy official told CNN. The sailor is not on a ventilator at this time, the official added. In a statement on Tuesday the Navy said they were "under increased observation due to shortness of breath."

Nearly 600 sailors on the Roosevelt have tested positive for Covid-19, the US Navy said in the statement, adding that 93% of the Roosevelt's crew members have been tested for the virus.

The impact of the coronavirus pandemic on the Roosevelt was at the center of a controversy that led to the resignation last week of acting Navy Secretary Thomas Modly, who had dismissed the aircraft carrier's captain Brett Crozier after the leak of a memo in which he implored Navy officials to urgently evacuate the ship to protect the health of its sailors. Crozier also flagged his concerns about challenges of trying to contain the virus aboard the ship and requested that sailors be allowed to quarantine on land.

"We are not at war. Sailors do not need to die. If we do not act now, we are failing to properly take care of our most trusted asset: our Sailors," he wrote in the memo that three US defense officials confirmed to CNN.

Secretary of Defense Mark Esper issued a statement later on Monday saying the Pentagon is "deeply saddened" by the death of the sailor.

"The entire Department is deeply saddened by the loss of our first active duty member to Covid-19. Our thoughts are with the family of the USS Theodore Roosevelt sailor who lost his battle with the virus today. We remain committed to protecting our personnel and their families while continuing to assist in defeating this outbreak," Esper said.

"We mourn the loss of the Sailor from USS Theodore Roosevelt who died today, and we stand alongside their family, loved ones, and shipmates as they grieve. This is a great loss for the ship and for our Navy. My deepest sympathy goes out to the family, and we pledge our full support to the ship and crew as they continue their fight against the coronavirus. While our ships, submarines and aircraft are made of steel, Sailors are the real strength of our Navy," Gilday said.

More than 4000 sailors evacuated from carrier

More than 4,000 sailors have since been evacuated and moved ashore in Guam. Sailors who have tested negative for the coronavirus are being housed in isolation in local area hotels.

The Navy says it is required to keep about 1,000 sailors aboard the vessel to perform key functions such as the operation of the ship's nuclear reactors.

The circumstances that led to Crozier's warning and the spread of the virus aboard the carrier are subject to an ongoing investigation by the Navy.

Adm. Gilday, is currently reviewing the investigation and recently refused to rule out any outcome, including a possible reinstatement of Crozier.

Vice Chairman of the Joint Chiefs of Staff Gen. John Hyten told reporters Thursday the US military needed to plan for similar outbreaks in the future as the Defense Department works to cope with the virus' impacts.

"I think it's not a good idea to think the Teddy Roosevelt is a one-of-a-kind issue. We have too many ships at sea, we have too many deployed capabilities. There's 5,000 sailors on a nuclear-powered aircraft carrier. To think it will never happen again is not a good way to plan. What we have to do is figure out how to plan in these kind of Covid environments," Hyten said.