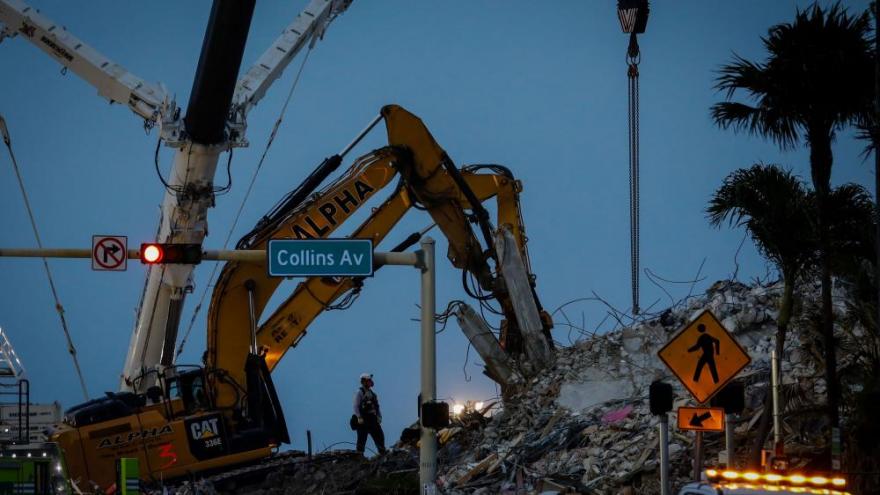 The Surfside condo collapse search and rescue efforts have transitioned to a recovery operation Wednesday.

"To share this news with the families this evening who are still missing their loved ones was devastating and it's also difficult to share with all of you," she said in an evening news briefing.

The transition will take place at midnight, she added.

"Our team has developed a very detailed plan to guide the transition and to ensure that the operations proceed at the same speed and intensity," Levine Cava said.

The mayor said the death toll now stands at 54, with 86 people "potentially unaccounted for."

The decision to transition to a recovery operation was based on the facts that emerged throughout the search and rescue mission in the past two weeks, Miami-Dade County Fire Chief Alan Cominsky said.

"To determine the viability of life in the rubble, we considered engineering, medical and other factors," Cominsky said.

Those factors included "the building collapse itself, the pancake, which gives you the lowest probability of survivability," Miami-Dade Fire Rescue Assistant Fire Chief of Operations Raide Jadallah said. "Typically an individual has a specific amount of time, in regards to lack of food, water and air. This collapse, you know, just doesn't provide any of that sort."

"The other factors that we have to include, you know, the fact that we did not get in the alert (from) a K-9, a sensor trip forward, sound, and any visual utilizing our cameras. The last known alert that we received was in the initial hours the day of the collapse," Jadallah added.

How to help Surfside victims

Finding life would be a 'miracle'

The search and rescue efforts to find survivors in the rubble of the building became increasingly grim this week and Cominsky said earlier Wednesday that personnel combing the rubble had found no evidence anyone survived the initial collapse.

"Today is a heartbreaking day, but I have not lost hope that there could yet be a miracle," Surfside Mayor Charles Burkett said during the evening briefing. "In the end, God is still in charge. While there seems to be no chance of finding life in the rubble, a miracle is still possible."

Wednesday afternoon, a group of collapse survivors gathered at a local hotel to receive a multiple police vehicle escort to the collapse site. The cluster of survivors gathered in the lobby of the hotel, being advised by uniformed police offers, officers in plainclothes, Red Cross workers and what appeared to be grief counselors.

A woman in her 60s said she was heading back to the Champlain South collapse site. "I'm just sad, but I want to see it," she told CNN.

The search continued Wednesday through inclement weather from Tropical Storm Elsa, which passed by the opposite coast of Florida. Winds of up to 30 miles per hour walloped crews Tuesday, but the weather had largely cleared by midday Wednesday, Cava said.

The condo's collapse has raised questions about whether other residential structures could be at risk in Miami-Dade County, where sea levels are rising, the salty air is corrosive and nearly two-thirds of all commercial, condo and apartment buildings are as old or older than the 40-year-old building that collapsed, according to a CNN analysis of county records.

Florida's legal community has created a safety task force to review laws governing the state's condominium development industry in the wake of the catastrophic Surfside collapse two weeks ago, according to a statement Tuesday.

The Condominium Law and Policy on Life Safety Task Force is intended to serve residents of the state and was created by the Real Property, Probate, and Trust Law Section of the Florida Bar, according to the statement.

"The Task Force will serve as a resource to the Governor and Legislature as they review all aspects of Florida condominium law, development, association operations, and maintenance to determine and recommend if legislative and or regulatory changes should be enacted to minimize the likelihood of a similar tragedy," Bob Swain, chairperson of the Florida Bar Real Property, Probate, and Trust Law Section, said in a statement.

The top local prosecutor in Miami-Dade County also said Wednesday she formally tasked a grand jury with investigating the cause of the collapse.

State Attorney Katherine Fernandez Rundle said in a statement she also asked the grand jury to "look into how we can prevent such a disaster from occurring again, not just in Surfside, and not just in condominiums, but in all buildings and structures in the coastal, intercoastal and surrounding areas of our county, state and nation."

The grand jury "enthusiastically agreed to accept this challenge" and voted in favor of conducting the investigation, Rundle said.

About 5 million pounds of debris have been removed from the site so far, Cominsky said.

The site has been broken up into grids, none of which have been fully cleared yet. The way the building collapsed as well as the magnitude of it means that teams have been able to get further down on some areas than others so far, he said.

Teams continue to search "as aggressive as we can to see if we can assist with the families and locate individuals," he said.

Tuesday was a day of gratitude for one family, when the uncle of a 15-year-old called the man who pulled the boy from the rubble just after the collapse to thank him.

Nicholas Balboa told CNN on Tuesday that he heard 15-year-old Jonah Handler screaming under the rubble immediately after the condo building collapsed. Balboa was not in the building but was nearby when it collapsed.

Balboa said Jonah's uncle told him the teenager was out of the hospital with only minor injuries.

Since the collapse, Balboa says he has replayed that moment in his mind many times, wondering what he could have done differently to save more people, he said.

Meanwhile, more federal organizations are investigating why the building collapsed.

Levine Cava said the National Institute of Standards and Technology (NIST), the US Geological Survey and the National Science Foundation are sending staff.

All of the debris removed from the site is considered "evidentiary debris," Levine Cava said.

The remnants are being sorted on-site, and any objects that can be distinguished are put in certain bins and labeled with the exact location where they were found, the mayor said.

The county has created a form for family members to document their belongings, which will be an active part of the investigation, Levine Cava said.

"The families are not reviewing what's come out of the site at this time, but we have photographs, they have their information, and as we move forward, we'll be attempting to do matching and releasing it to them as soon as we can, given the active investigation," she said.