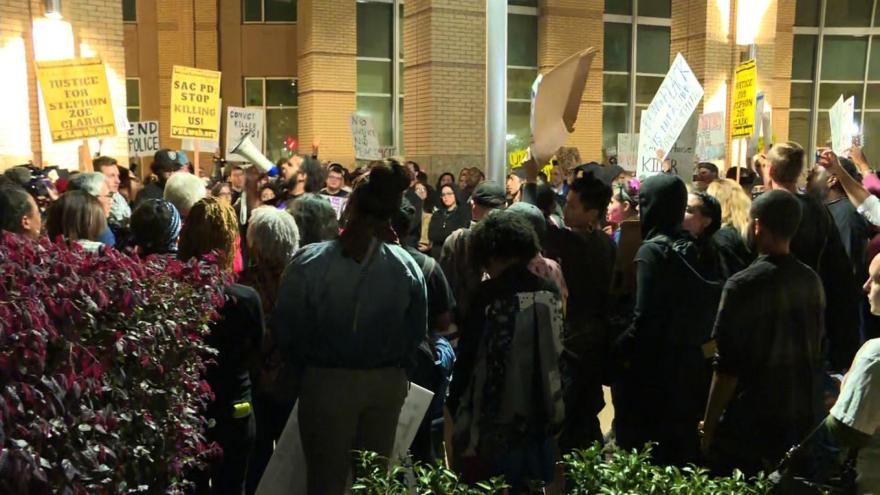 (CNN) -- The Sacramento Police Department needs to make significant improvements in its use-of-force policies in the wake of Stephon Clark's death, including better training for officers and an end to choke holds, state officials said Tuesday.

California Attorney General Xavier Becerra outlined the recommendations a day after the family of Clark -- an unarmed black man who was shot and killed in his grandmother's backyard by police last year -- filed a federal wrongful death lawsuit.

The state Department of Justice recommended an overhaul of force-related policies within the department. City officials welcomed the input and said they expect they will put the plan into action.

It said an officer's response to a suspect's actions should be proportional to the nature of a threat and that he or she "exhaust all reasonably available alternatives before using deadly force."

The department should also prohibit officers from shooting at, or from, moving vehicles, the report said.

Police Chief Daniel Hahn, who requested the state review, said his department wants to improve and set an example of transparency. The report recommended police implement a community outreach plan that includes regularly scheduled meetings with residents and groups.

Clark's family contends the 22-year-old was racially profiled, and the two officers used excessive force in the March 2018 shooting incident. The officers failed to identify themselves or issue a verbal warning before firing approximately 20 shots, the lawsuit said.

Authorities have said the officers were responding to a report that a man had broken car windows and was hiding in a backyard. Police chased that man -- later identified as Clark -- who hopped a fence into his grandmother's property. He was shot in her backyard on the night of March 18.

Police said the officers who fired at Clark believed he was pointing a gun at them. But investigators determined Clark was actually carrying a cell phone.

Sacramento police had no immediate comment on the lawsuit and the city attorney's office declined comment, citing an active investigation.

The Sacramento District Attorney's Office is reviewing whether the officers' conduct constitutes a crime that could be prosecuted under state law, the office said in a statement. Becerra's office previously said it was also conducting an independent investigation.

After the shooting, protests erupted for several days in Sacramento as tempers flared. Frustrated residents and Black Lives Matter activists urged accountability for the shooting. At one point, protesters blocked the entrance to the Golden 1 Center, where the Sacramento Kings play, forcing them to play a game against the Atlanta Hawks in a nearly empty arena.