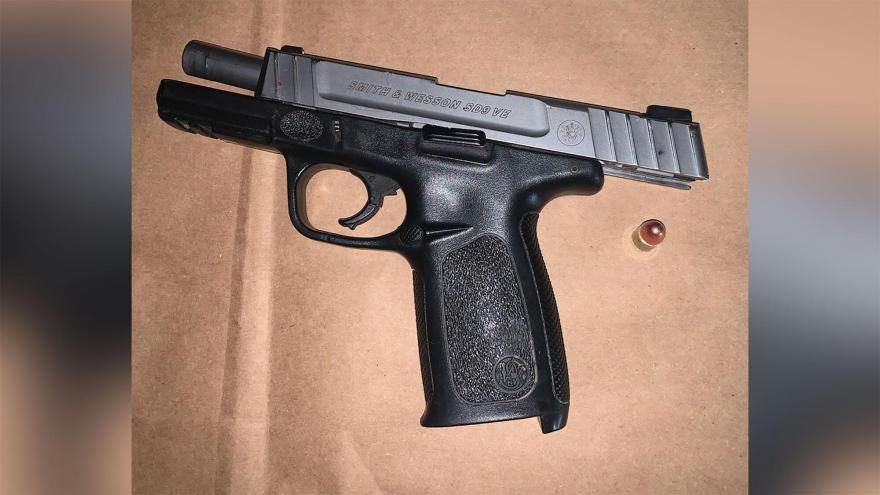 Sacramento Police said this firearm was recovered near the suspect.

(CNN) -- A Sacramento police patrol sergeant shot and killed an armed suspect inside a warehouse Saturday night after the suspect allegedly pointed a gun at a crowd of people, police said in a news release.

Police responded to Juliesse Avenue in California's state capital around 6:30 p.m. after receiving reports of vehicles being driven recklessly in the area, the release said. When the officers arrived, they found a large group gathered in a warehouse for a boxing event.

At around 8 p.m., a patrol sergeant, who had stayed in the area, saw people running from the building, police said. One person told the sergeant that someone had a gun, and multiple gunshots were then heard, police said.

The sergeant ran toward the sound of the shots and confronted an armed suspect who was allegedly pointing a firearm toward a crowd of people inside the building. The sergeant then fatally shot the person, police said.

The suspect was taken to a hospital with life-threatening injuries and later died at the hospital, according to police.

Police said they found a second gunshot victim while they were canvassing the scene. That victim was taken to a local hospital with non-life-threatening injuries, and police are still investigating how and when the victim was shot.

The Sacramento County Coroner's office will release the name of the person that was killed, pending next of kin notification.

The Sacramento Police Department's Homicide Unit and Internal Affairs Division is investigating the incident with oversight from the Office of Public Safety Accountability and the Sacramento County District Attorney's Office. Video associated with the incident is being gathered by detectives and will be released to the public within 30 days, according to police.