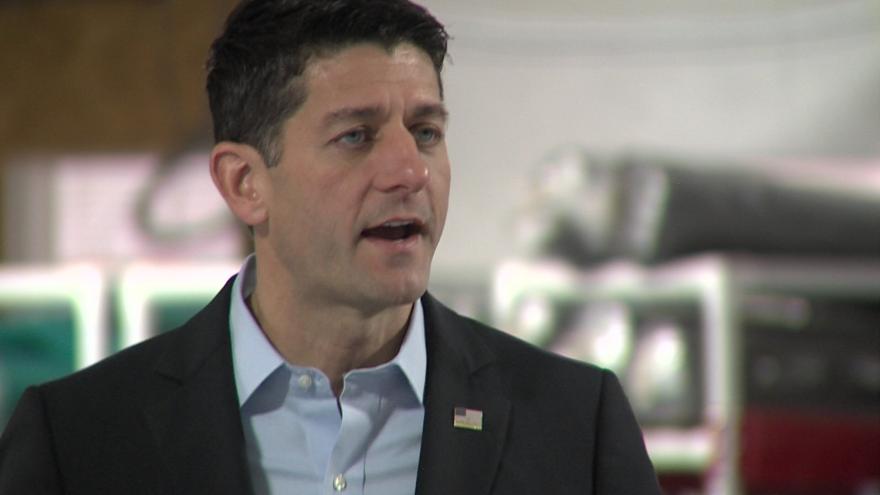 House Speaker Paul Ryan's announcement that he won't seek another term has made his wife happy — and a little tearful.

Janna Ryan was doing some shopping in downtown Janesville, Ryan's hometown, Wednesday soon after Ryan discussed his decision at a Washington news conference.

She says she's looking forward to having more balance in the family's life. She said Ryan has given "his all" to a job that's more a lifestyle than a job.

Asked whether Ryan's relationship with President Donald Trump had anything to do with his decision to step down, Janna Ryan said it did not.

She said she planned to visit Ryan's downtown office later Wednesday to give hugs to all the workers there.

Pence says in a statement that Ryan has been "instrumental" in enacting President Donald Trump's agenda.

Ryan announced he would not seek re-election in 2018 and would be giving up the speakership. Ryan is planning to serve out his term and retire in January.

Pence says Ryan has been a "fierce defender" of the U.S. military and a leader in helping pass Trump's tax overhaul in Congress. He says they'll always be grateful for Ryan's "partnership and support."

McConnell hailed Ryan on the Senate floor Wednesday after Ryan announced he will be retiring after finishing out his term.

McConnell says the economy is charting a new course to greater prosperity and opportunity thanks to the tax overhaul Ryan helped put into place.

McConnell says Ryan's leadership was also vital in securing a big boost in defense spending and in enabling new treatments for rare diseases.

McConnell describes Ryan as "a humble servant and a happy warrior" and says he's pleased Ryan will be serving out his term because "our work together is far from finished."

House Speaker Paul Ryan's leadership lieutenants say it's not yet time to jockey to succeed him.

Both Majority Leader Kevin McCarthy and No. 3 House Republican Steve Scalise wouldn't say if they aspire to succeed Ryan.

Scalise told The Associated Press, "I don't think now is the time to talk about what titles people want."

McCarthy said "the only thing I'm focused on is doing whatever we can to keep the majority."

McCarthy lodged a bid to succeed former Speaker John Boehner in 2015 but withdrew after conservatives balked. Ryan took that job after that.

House Speaker Paul Ryan says he is leaving the speakership and retiring from Congress with "no regrets." He says he has given the job "everything that I have."

Ryan is explaining his decision to not seek re-election as one that was the best for his family. Ryan says he will serve out his term and retire in January. He says the headwinds facing Republicans in November played no factor in his decision.

Ryan says he came into Congress almost two decades ago, before he had any children. Now, all three of his children are teenagers.

Ryan says that if he were to stay for one more term, his children would only know him as a weekend dad and "I can't let that happen."

In a statement on Ryan's decision to retire, Pelosi doesn't cite any specific issues she wants to tackle with the Republican she has opposed on nearly every issue.

It's unlikely that the two sides will compromise on much legislation in an election year.

Pelosi's brief statement describes Ryan as an "avid advocate for his point of view and for the people of his district." And she commends him for his "steadfast commitment to our country."

President Donald Trump says that while Republican House Speaker Paul Ryan has decided not to run for re-election, Ryan leaves a "legacy of achievement."

Trump says on Twitter Wednesday: "Speaker Paul Ryan is a truly good man, and while he will not be seeking re-election, he will leave a legacy of achievement that nobody can question. We are with you Paul!'

Ryan announced his plans at a closed-door meeting of House Republicans Wednesday morning. Ryan spokesman Brendan Buck said in a statement that Ryan was proud of his achievements and ready to focus on his family. Buck said Ryan will serve out his term and retire in January.

Ryan's plans add to GOP uncertainty as Republicans face worries over losing their majority in the fall.

A spokesman for Republican House Speaker Paul Ryan says he will serve out his term before retiring in January.

Brendan Buck, counselor to the speaker, says the "the speaker is proud of all that has been accomplished. He said Ryan is ready to devote more of his time to being a husband and a father."

Buck says Ryan will discuss his decision at a news conference Wednesday.

Buck says that while Ryan did not seek the position of speaker, "he told his colleagues that serving as speaker has been the professional honor of his life, and he thanked them for the trust they placed in him."

Ryan's plans have been the source of much speculation amid Republican concerns over keeping their majority in the House of Representatives. Ryan had made tax cuts a centerpiece of his legislative agenda, and Congress delivered on that late last year.

Two people with knowledge of Ryan's thinking said he has decided against seeking another term, but they did not say why. Both sought anonymity because they were not authorized to speak publicly.

Ryan, a Republican from Janesville, Wisconsin, was first elected to Congress in 1998 and became speaker in 2015 after former House Speaker John Boehner retired. He was former GOP presidential nominee Mitt Romney's running mate in 2012.

Ryan and his wife have three children.