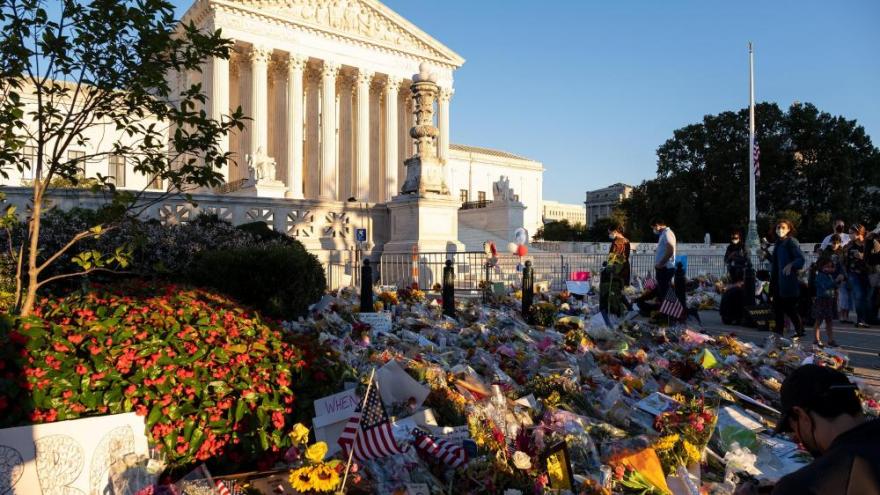 When Justice Ruth Bader Ginsburg returns for the final time to the Supreme Court on Sept. 23, an army of more than a hundred of her former clerks will meet the casket and accompany it up the stone steps leading to the great hall where the liberal icon presided for almost 30 years.

(CNN) -- When Justice Ruth Bader Ginsburg returns for the final time to the Supreme Court on Wednesday, an army of more than a hundred of her former clerks will meet the casket and accompany it up the stone steps leading to the great hall where the liberal icon presided for almost 30 years.

The Supreme Court, built on precedent and rooted in tradition, will honor Ginsburg in a private ceremony and then a public viewing, but her former clerks, standing guard, won't leave the casket.

When the casket arrives at the court, some of her clerks will serve as honorary pallbearers while the rest will line the building's steps. About 120 clerks from her days at the appellate court as well as the Supreme Court are expected to gather at the court.

Besides her family and written opinions, Ginsburg's clerks are her most lasting legacy. They began their tenures as young inexperienced lawyers and emerged with unparalleled legal credentials that will mark their resumes for a lifetime: Supreme Court clerk.

But for many, working for Ginsburg wasn't just a legal lesson. She also instilled the notion that women could have it all, but maybe not at the same time. She praised her "life partner," her husband, Marty, "the only man," she would say, who "cared that I had a brain."

The justice -- who was a night owl, a stickler for administrative law and close friends with her ideological opposite, the late Justice Antonin Scalia -- was a role model in both law and life.

"The justice taught us all a thing or two about a life well lived," said former clerk Lori Alvino McGill.

"She was among the first mentors to tell me I could do anything -- but she also told me that it would be foolish to think I could do many things well at the same time," said McGill. "The life lessons she imparted gave me the courage to take a step back from my own career and choose, for this moment in time, to be more present for my three children."

Ginsburg told her clerks that sometimes in marriage, and in work, it helps to be "a little bit deaf," and she taught them about perseverance and herculean strength.

Amanda Tyler joined the justice's chambers in the summer of 1999 but soon learned that weeks before the new term was to begin, Ginsburg had received her first cancer diagnosis. Most believed she would sit out arguments to go through an extensive treatment regimen. But on the first day of the term, Tyler -- who wrote about the experience for The Atlantic magazine -- got the call from the justice.

"Amanda," she said, "call the chief's chambers and make sure he knows I'm coming." Later, Ginsburg would show off the new fanny pack she had acquired to hide her portable chemotherapy device.

The day after her husband died in 2010, Ginsburg was on the bench, rarely missing a session.

In the weeks before her own death, she exchanged drafts for a book project she was working on with Tyler.

"She was still teaching me about the craft of writing -- how important precision is, and to never use four words when three will do," Tyler said.

"With a marriage, new birth or a new job, a note from the justice followed," said Lisa Blatt, who clerked for Ginsburg at the US District Court for the District of Columbia. "And when visiting with the justice, she always asked about our kids and how the job was going."

Ginsburg was picky about the kind of clerks she chose.

"My very first year on the court, I was served by a law clerk who had been with me on the DC circuit, and his application was tremendously attractive to me. Why? Because he wrote that he was studying law at night at Georgetown and the reason was that his wife, an economist, had a good job at the World Bank," she told The National Constitution Center's Jeffrey Rosen in 2018.

The stories are legend. When Ginsburg first heard her nickname -- Notorious RBG -- she wasn't sure what it meant-- so she asked a clerk.

"I asked my law clerk, what is the Notorious RBG?" she told an audience at Duke Law school in 2015.

Once she learned that the name was a play on that of the late Notorious B.I.G., a rapper, it became a talking point in the legion of speeches and appearances that she would make even when she was ailing from one of her five bouts of cancer. Often carrying a small canvas tote bag that read "I dissent," she'd tell the audience that she was a lot like her namesake "because we are both from Brooklyn." The crowd would roar.

By the end, the 87-year-old was far hipper than her former clerks. There were "you can't have the truth without Ruth" and "fear the frill" T-shirts as well as coffee mugs and bobbleheads. One musician set her dissent in a religious liberty case to music.

Right about then, it wasn't just her younger clerks who she was impressing: She had become an icon.

"It makes absolute sense that Justice Ginsburg has become an idol for younger generations," Justice Elena Kagan said at an event at the New York Bar Association in 2014. "Her impact on America and American law has been extraordinary."