Ruth Bader Ginsburg will become the first woman to lie in state in the US Capitol. Here's who else made history 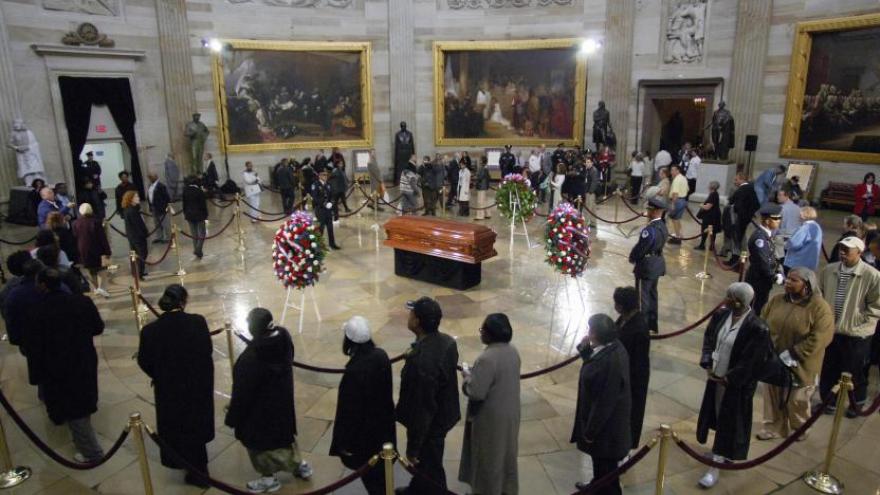 Rosa Parks lies in honor in the Capitol Rotunda in 2005.

Ginsburg, who died last Friday due to complications of metastatic pancreas cancer, will become the first woman to lie in state in the US Capitol on Friday, according to congressional historians. She'll also be the first Jewish person to be given that honor.

Ginsburg joins Rosa Parks, John Lewis, and Abraham Lincoln as those who were laid in state or laid in honor at the Capitol.

Lying in state (for government official and military officers) and lying in honor (for private citizens) is when someone's remains are placed in the US Capitol in Washington, DC, to allow the public to pay their respects. This tribute is considered one of the highest honors.

Since the practice started in 1852, 38 people -- counting Ginsburg -- have been given this honor, including 12 presidents.

There are no written rules on who may lie in state or honor. It is determined by the current House and Senate and then must be accepted by the family of the deceased.

Here are some other historic firsts.

Last year, the late Rep. Elijah Cummings made history as the first Black lawmaker to lie in state at the US Capitol when his body was laid in state in Statuary Hall, an expansive room that houses a collection of statutes contributed by individual states to honor prominent individuals in history.

House Speaker Nancy Pelosi, Senate Majority Leader Mitch McConnell, Senate Democratic Leader Chuck Schumer and other members of Congress spoke in tribute to Cummings, a longtime Maryland Democrat. In her remarks, Pelosi referred to Cummings as "our North Star, our guide to a better future for our children."

The late Rep. John Lewis was the most recent person to lie in state after he died of cancer at 80. He became the first Black lawmaker to lie in state at the US Capitol rotunda, according to congressional historians, as the Capitol was closed due to the coronavirus pandemic.

The ceremony for the civil rights icon and late congressman was July 27-28.

Following the ceremony in the rotunda, a public viewing began outdoors as a safety precaution. But neither the virus nor warm weather kept crowds from lining up for a chance to pay their respects to Lewis' casket. Lines to the Capitol stretched for multiple blocks all the way to the Supreme Court building.

Daniel Inouye is the only Asian American to lie in state at the Capitol Rotunda after he died at 88 in 2012.

Inouye was a World War II veteran who received the Medal of Honor and represented Hawaii in the Senate for five decades. He remains the second-longest serving senator in the chamber's history.

Inouye was of Japanese heritage and served in a US Army unit made up of Japanese Americans. His battalion was the most decorated unit of World War II.

Rosa Parks was the first woman and second Black American to lie in honor in the rotunda in 2005 after she died at the age of 92 of natural causes. The civil rights activist is one of four private citizens given this honor.

Capitol Police Officer Jacob Chestnut was the first Black American laid in honor after he was killed in the line of duty in 1998. A gunman fired shots in the Capitol building killing two officers: Chestnut and detective John Gibson. Both of the men were honored by becoming the first private citizens laid in honor at the Capitol, according to congressional historians.

Abraham Lincoln was the first president to lie in state after his assassination in 1865. He was the second person in US history to receive this honor, according to congressional historians. The first was Henry Clay, a senator and representative, in 1852. The main reason for this: The Capitol wasn't fully constructed until 1829.

A catafalque, a decorative wooden frame to hold a coffin, was built for Lincoln. Since 1865, most services in the rotunda have used Lincoln's catafalque, reports congressional historians.

CORRECTION: This piece has been updated to correct the name of Henry Clay.