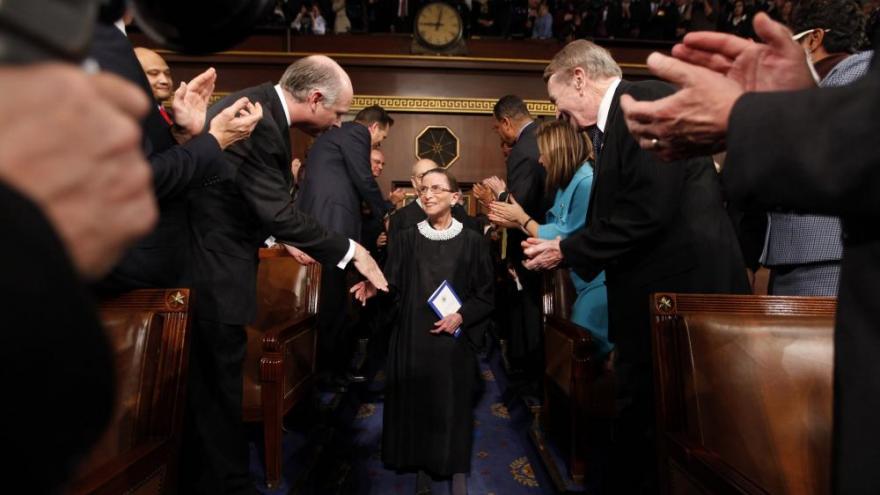 Supreme Court Justice Ruth Bader Ginsburg returned to the bench after missing a day at the court last week due to a stomach bug. CREDIT: Pablo Martinez Monsivais/Pool/Getty Images

(CNN) -- Supreme Court Justice Ruth Bader Ginsburg returned to the bench on Monday after missing a day at the court last week due to a stomach bug.

Ginsburg, 86, took her seat wearing one of her lace collars. The justices were there to grant new admissions to the bar, not to hear arguments. Justice Stephen Breyer was not present because he is traveling.

This comes after the four-time cancer survivor missed an argument day last week. She was in the building on Friday to participate in the court's closed-door conference where they presumably took the first initial vote on a case concerning the future of the Obama-era Deferred Action for Childhood Arrivals program.

The court meets again for a closed door conference on Friday, but doesn't take the bench again until December 2.

Ginsburg missed oral arguments for the first time last term while recovering from surgery to remove two cancerous nodules from her left lung. At the time, she participated in the cases by reading transcripts.

So far this term, Ginsburg has been an active participant from the bench, often asking the first questions, as the justices have been hearing an unusual docket of blockbuster cases, including immigration, abortion and the Second Amendment.

Ginsburg, who was nominated to the court in 1993 by President Bill Clinton, has had a lengthy history of medical issues. In August, she was treated for pancreatic cancer, and last fall, nearly two months before she underwent surgery to remove the cancerous nodules, the liberal justice received treatment for three ribs she fractured during a fall in her office.