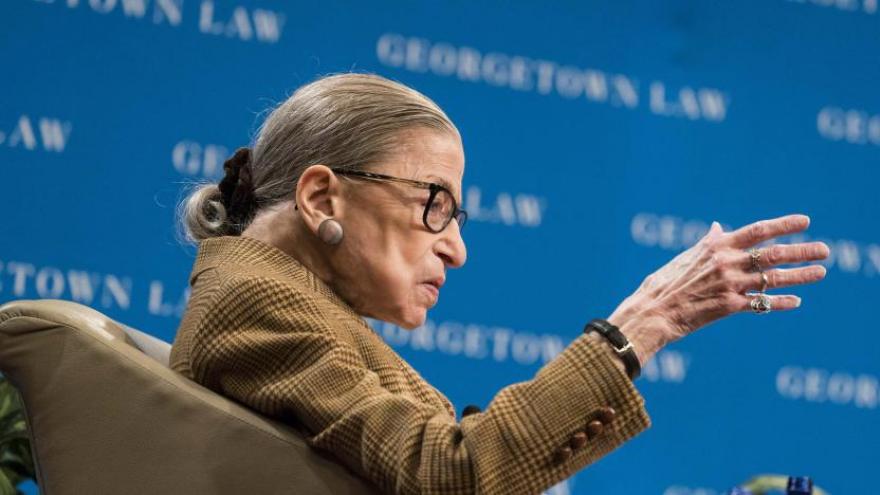 Justice Ruth Bader Ginsburg, here participating in a discussion at the Georgetown University Law Center on February 10, 2020 in Washington, DC, has been taken to the hospital and treated for a possible infection.

(CNN) -- Justice Ruth Bader Ginsburg has been taken to the hospital and treated for a possible infection, according to a court spokeswoman.

"Justice Ginsburg was admitted to The Johns Hopkins Hospital in Baltimore, Maryland early this morning for treatment of a possible infection," spokeswoman Kathleen Arberg said Tuesday.

"She was initially evaluated at Sibley Memorial Hospital in Washington, D.C. last night after experiencing fever and chills. She underwent an endoscopic procedure at Johns Hopkins this afternoon to clean out a bile duct stent that was placed last August. The Justice is resting comfortably and will stay in the hospital for a few days to receive intravenous antibiotic treatment."

It's the latest development in Ginsburg's lengthy history of medical issues while serving on the high court -- though she's proven adept at continuing her job without interruption.

When the justices heard oral arguments by telephone in May due to the coronavirus pandemic, Ginsburg participated from her hospital room while still recovering from a benign gallbladder condition.

The phone connection was glitchy as Ginsburg began her questioning, and her voice sounded weaker than normal at times. But she hit her stride later in the argument asking questions that sometimes were more like comments.

Ginsburg, 87, missed oral arguments for the first time in January 2019, while recovering from surgery after two cancerous nodules were removed from her left lung the previous month. At the time, she participated in the cases by reading transcripts. The liberal justice had already received treatment in November 2018 for three ribs she fractured during a fall in her office. And in August 2019, she was treated for pancreatic cancer.

As a result, her health has come under increased scrutiny as the court grapples with wide-reaching cases that can transform American law. Since coming to office, President Donald Trump has made two appointments, Neil Gorsuch in 2017 and Brett Kavanaugh in 2018, deepening the conservative tilt.

Trump told reporters Tuesday that he hopes Ginsburg is feeling better and praised her for "actually giving me some good rulings."

In 2013, Ginsburg was dubbed the "Notorious RBG," a play on the name of the late rapper Notorious B.I.G., as a response to a dissent she wrote when the court majority issued a milestone decision rolling back voting-rights protections.

That trend continued when she filed a fierce dissent earlier this month as the court majority allowed the Trump administration to expand exemptions for employers who have religious or moral objections to complying with the Affordable Care Act's contraceptive mandate.

"Today, for the first time, the Court casts totally aside countervailing rights and interests in its zeal to secure religious rights to the nth degree," she wrote, joined by Justice Sonia Sotomayor.

"This Court leaves women workers to fend for themselves, to seek contraceptive coverage from sources other than their employer's insurer, and, absent another available source of funding, to pay for contraceptive services out of their own pockets," she continued. She observed that the administration had said the new rules would cause thousands of women -- "between 70,500 and 126,400 women of childbearing age," she wrote -- to lose coverage.