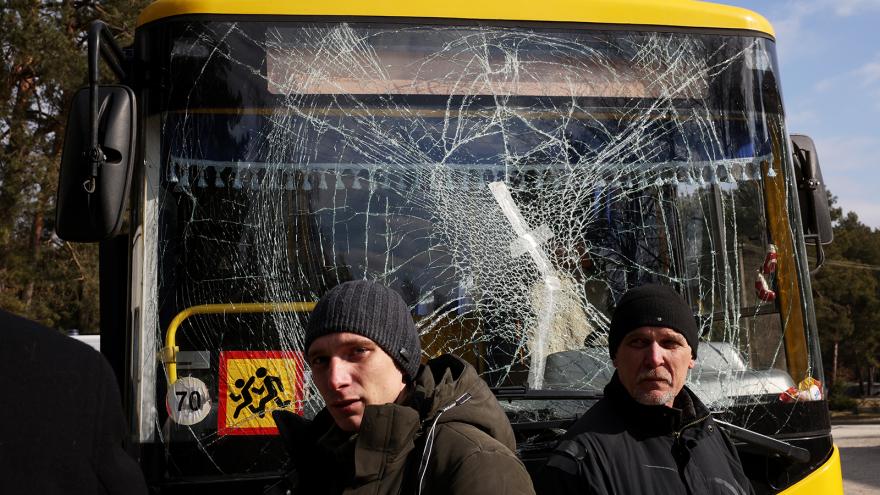 (CNN) -- On the surface, the western Ukrainian city of Lviv does not look like a city on the edge of a war zone.

The streets are bustling with people. Austro-Hungarian architecture recently painted in pale hues stretches for miles. The trams still run on time and most of the shops that first shuttered after Russian President Vladimir Putin launched his February 24 invasion of Ukraine have once again opened their doors.

Yet beneath the city's relaxed exterior lies a crucial nexus in the war effort against Moscow's brutal assault against the former Soviet Republic.

Lviv hosts one of the country's highest concentrations of internally displaced people -- over 200,000 in a city of just over 700,000 people. At the same time, the larger region serves as a crucial weapons supply route to the Ukrainian military and a wider resistance effort that has foiled Moscow's plans for a blitz-like invasion.

At 50 miles from the Polish border, the city is also at NATO's doorstep -- any attack here could have international repercussions.

"Attacks in western Ukraine are dangerous because it could affect Poland," said historian Yaroslav Hrytsak, who was sitting at a trendy coffee shop in the historic center of Lviv. "This could turn the conflict into an international conflict."

Tensions are ramping up here, despite the hundreds of miles that separate the region from Russia, culminating in a Russian strike on a military base close to the Polish border on Sunday. Russia says it is targeting arms supply shipments. The US denies that the attack disrupted weapon transfers.

Western Ukraine's supply lane has become even more important as Russia chokes off sea passages and lays siege to the country's south. To the north is Belarus, which hosts Russian troops and has been one of the launching pads of the invasion. To the east is Russia.

"At one time it looked like Putin wasn't going to touch this region," said Hrytsak. "He believed that western territory is too toxic, too anti-Russian. He wanted this region to go to the devil."

"Now this has changed. Now Putin wants all Ukraine," he added.

When Russian forces bombarded the military complex in the Lviv region, families in the city heard the booms and thuds of Putin's war for the first time, getting a tiny taste of the horrors their countrymen and women further east have experienced for nearly three weeks.

Analysts believe an invasion of western Ukraine remains a long way off, especially since the resistance in central, southern and eastern Ukraine has repelled a significant occupation of the country.

Still, the attack seemed to bring the war closer to an international showdown. At least 35 people were killed and 134 injured in Putin's most westerly Ukrainian target -- just 15 miles from Poland, a NATO member.

The site of the attack -- the International Center for Peacekeeping and Security at Yavoriv -- is the biggest military training facility in western Ukraine. It was also where NATO has performed drills. US instructors trained Ukrainian soldiers there last month, leaving before the invasion began.

Russia claimed to have killed 180 "foreign mercenaries" without providing proof. Ukrainian officials said there were no reports of foreign casualties in the attack and NATO has denied that any of its units are in Ukraine.

Ukrainian authorities have been relatively tight-lipped about the details around the attack, which only seemed to underscore its significance.

When a CNN team tried to report from the site of the attack, the military had cordoned off the area around six miles away from the base. Public access roads leading to the site were blocked. The CNN team saw several people, who identified themselves as volunteer foreign medics, dressed in camouflage disembark from a van near a military cordon.

"The key point here is that Putin doesn't believe he is fighting Ukrainians. He doesn't see Ukraine as a separate entity or a viable state," said Hrystak. "He believes he is fighting America and NATO on Ukrainian soil."